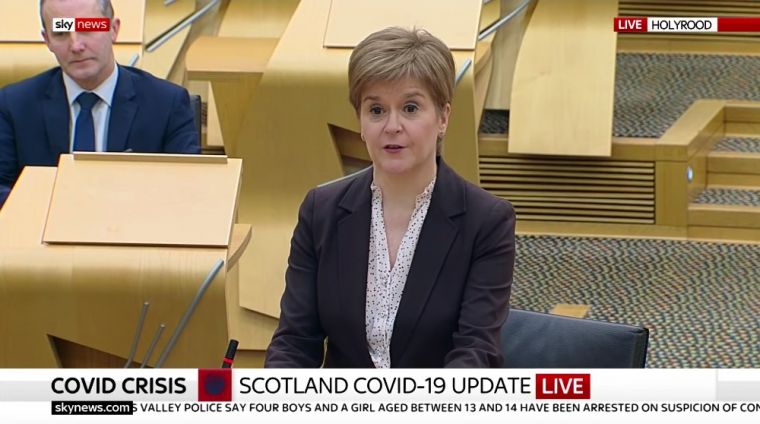 “What is going on in Scotland?’ asked the Australian lawyer at the breakfast I was speaking at this morning. Not a question I wanted to hear and not an easy one to answer. As political dramas go this was about as dramatic as you can get. This week the First Minister of Scotland faced off against the former First Minister, and her mentor, Alex Salmond.

The story so far

In 2017, Nicola Sturgeon decided in the wake of the MeToo movement to update the Scottish government’s policies on sexual harassment. Amongst other things this meant that ‘historic complaints’ would be easier to deal with. At the same, time two women raised matters of concern which then became complaints against Salmond. Salmond and his defenders claim that this was no coincidence and was in fact all part of a process to prevent his rumoured return to Scottish politics.

Sturgeon claimed that the first she heard of these complaints was on 2 April 2018, although it later turned out that Salmond’s former Chief of Staff Geoff Aberdein met with her a few days earlier to discuss the complaints. Sturgeon’s own chief of staff knew about them at the beginning of March.

Salmond then sought and obtained a judicial review into how the case had been conducted. Despite being warned by their solicitors that the case was unlikely to succeed, the Scottish government continued to fight it until a couple of months later when they were compelled to concede, and Salmond was awarded £500,000 in costs.

But on 24 January 2019, Salmond was arrested and charged with 14 sexual offences. These were not trivial, with two being attempted rape. To say that Scottish politics and society was shocked is to put it mildly! On 23 March, he was acquitted of all charges and what came out in the trial was that while he may have been a ‘creep’, he was not a criminal or sexual predator.

What happened this week?

What came to a head last week was a Scottish Parliamentary committee inquiry, not into Alex Salmond, who has now been declared innocent, but into the Scottish government’s botched handling of the case – an expensive and embarrassing farce.

In particular, Nicola Sturgeon is accused of breaching the ministerial code by lying to the parliament, while the situation is made more complicated by the fact that Sturgeon’s husband is Peter Murrell, the party CEO. His evidence embarrassingly contradicted his wife’s about the nature of her meeting with Salmond.

Salmond has argued that there was a conspiracy against him. This has been somewhat backed up by the Scottish government withholding evidence from its own committee and seeming to obstruct it at every turn.

“Totally agree folk should be asking the police questions… report now with the PF [Procurator Fiscal] on charges which leaves police twiddling their thumbs. So good time to be pressurising them. Would be good to know Met looking at events in London”.

“TBH [To be honest] the more fronts he is having to firefight on the better for all complainers. So CPS [Crown Prosecution Service] action would be a good thing.”

This week, in six hours of evidence, Salmond gave a devastating indictment of Sturgeon, her husband and other top government officials by accusing them of lying, withholding evidence and conspiring. In an eight-hour response Sturgeon gave a strong defence and an equally devastating attack on Salmond, pointing out how horrible he is (although he was not on trial), proclaiming herself a champion of women and frequently using the ‘I don’t recall’ response.

What does all of this mean? And why should we be interested? I hope that as Christians we are not interested in the sordid details – of which there are plenty. The whole farce has been deeply damaging for Scotland and for the reputation of the Scottish institutions. But there are some wider lessons for us as we look on with horror and, for those of us who are Scottish, a degree of shame.

Primarily this case demonstrates the dangers of political polarisation coming into the judicial system. This has been, and continues to be, a very political trial/investigation. The reactions to it indicate what can only be called confirmation bias – if you love Nicola Sturgeon then you will love her performance and will #standwithNicola. If you can’t stand her then it’s #resignNicola. Many who do not share the partisan politics don’t know what to believe and are just confused by the whole thing. I include myself in that latter group.

It seems to me highly likely that Sturgeon has misled the Scottish parliament and that the considerable powers and influence of the Scottish government have been used to protect her. Her claim that she, as the most powerful and popular person in the land, is just a wee woman standing up for women against a powerful man, doesn’t really hold water. And I struggle with her testimony given under oath that she still does not know who the complainants are. Scottish politics is a small field and most political journalists and many politicians do know.

But Salmond’s behaviour has not come across well either. It gives all the appearance of two powerful political beasts out to destroy one another – with the resultant damage to those around.

It also reminds us, as if we needed reminding, of the depth of human sinfulness and how it’s always humans who muck up systems – no matter how ‘human proof’ these systems are meant to be. Once you start lying, abusing and manipulating, it’s hard to stop.

The political parties have not covered themselves in glory during this whole process. The Tories made the mistake of demanding Sturgeon resign before they heard her evidence. Their new inexperienced leader, Douglas Ross, probably wanted to get in ahead of Labour. But it looked, and was, cheap and opportunistic.

The SNP have deployed their considerable armoury in defence of their leader – they are a very disciplined force and know how to use the mainstream media and the Twitter mob effectively. But there is something disturbing and almost Trumpesque about Justice Secretary Humza Yousaf regularly tweeting in order to attack anyone who dares question his beloved Leader.

I think my two biggest concerns are first of all for those who feel they have been let down by the justice system and then for the way that this justice system has been misused. If Sturgeon is right, then a great injustice has been done to the women involved. If Salmond is right, then we are faced with the frightening scenario that the political executive can work with the prosecuting services to use the law to try and remove a political opponent.

Both concerns are made worse when you realise that the Scottish Parliament is about to pass a hate crime Bill which could criminalise some speech, even in homes, and result in discrimination and even prosecution for those who would dare to uphold biblical standards. I doubt I would be able to return to Scotland if this Bill was passed and I wonder if my present home of Australia would accept me as a political/religious refugee?!

One SNP politician told me that this week’s events are just ‘a storm in a teacup’. But it is much more than that. It is indicative of how far Scotland has descended from its Christian roots. Scotland was once a great Christian nation – with an education, legal, church and political system that was amongst the finest in the world.

We sent engineers, doctors, nurses, politicians, pastors, scientists, missionaries and writers all over the world. Now we are in danger of becoming a laughing stock, and even more seriously, developing into some kind of ‘progressive’ authoritarian State which will serve as a warning to the rest of the world – this is what happens when you move away from your Christian roots.

Please pray for my beloved, wounded country. May there be healing and renewal.

Wealth, Health, Happiness and Holiness &#8211; The Vision and SIN of Nicola Sturgeon

An Open Letter to the First Minister of Scotland &#8211; Alex Salmond

Do we need to change the Gospel to speak to today’s world?