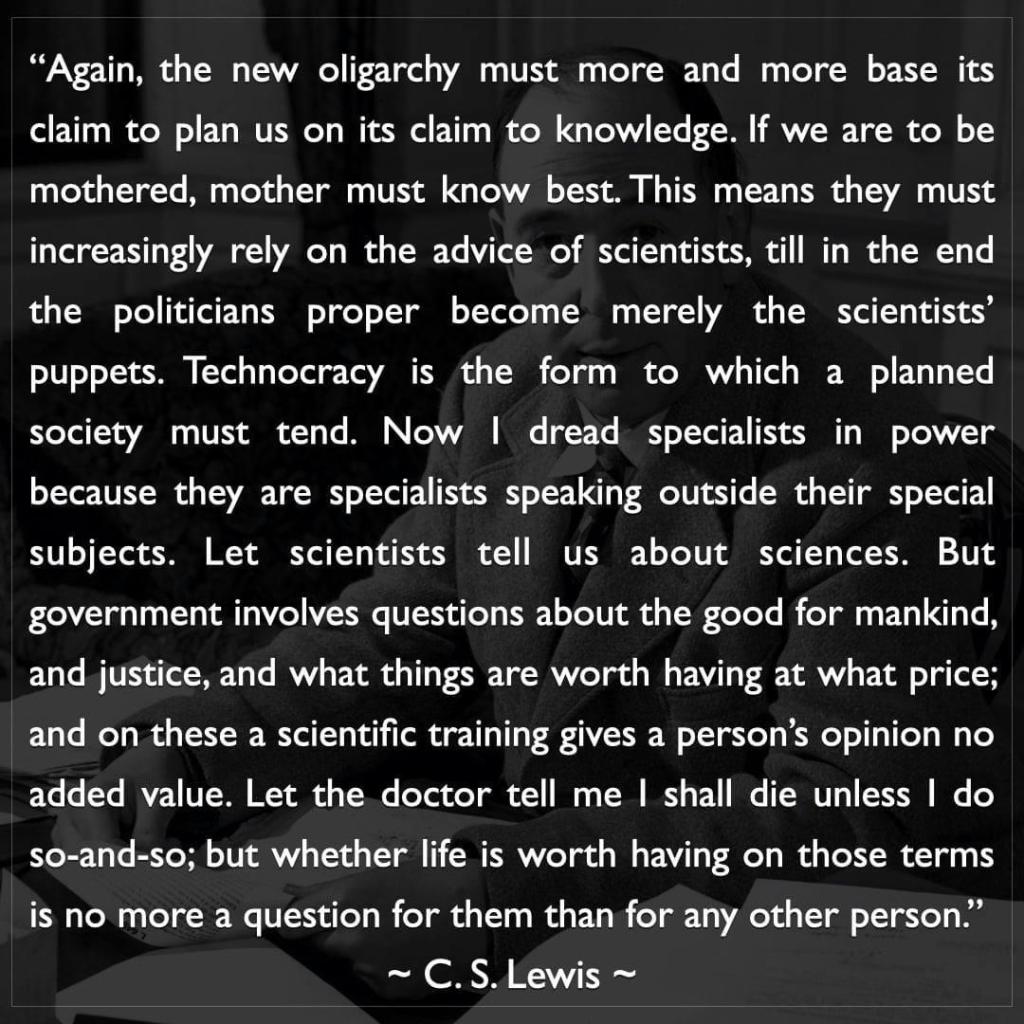 It is too good to be true – and so I was sceptical…not of my friend, but having been stung before by citing C S Lewis quotes that were not from the man himself I started to look for a source.  Then Andy Bannister came up with the same quote – was this a meme or the real thing…?  Thankfully it IS from Lewis – from an essay entitled “Willing Slaves of the Welfare State” published in The Observer  on July 20th 1958.   The essay itself is fascinating.    Lewis’s comments about technocracy and politicians becoming the ‘scientists puppets’ are spot on.   The doctor can tell us what they think will happen to us – but do they have the right to tell us how to live our lives?

(Note:  In order to avoid getting the usual ‘enraged from Edinburgh’ or ‘angry from Australia’ or ‘narky from New York’  e-mails can I point out that I do not think Covid 19 is fake, or just flu, or a conspiracy.  It’s a real and serious disease which is going to harm our society whatever and is a threat to many of us – including me.  Nor am I opposed to government measures to try and deal with it.  The question is about balance and when the cure becomes worse than the disease.   The quotes from Lewis below highlight in my view the biggest danger.  Feel free to disagree but do try to stay away from your own conspiracy theories!)…

There are other prescient prophetic aspects in Lewis’s essay ( the full version is here – http://liberty-tree.ca/research/willing_slaves_of_the_welfare_state)

:  All below are quotes…

“The first is the advance, and increasing application, of science. As a means to the ends I care for, this is neutral. We shall grow able to cure, and to produce, more diseases —bacterial war, not bombs, might ring down the curtain-– to alleviate, and to inflict, more pains, to husband, or to waste, the resources of the planet more extensively. We can become either more beneficent or more mischievous. My guess is we shall do both; mending one thing and marring another, removing old miseries and producing new ones, safeguarding ourselves here and endangering ourselves there.”

But in an increasingly planned society, how much of what I value can survive?……

I believe a man is happier, and happy in a richer way, if he has ‘the freeborn mind’. But I doubt whether he can have this without economic independence, which the new society is abolishing. For economic independence allows an education not controlled by Government; and in adult life it is the man who needs, and asks, nothing of Government who can criticise its acts and snap his fingers at its ideology. Read Montaigne; that’s the voice of a man with his legs under his own table, eating the mutton and turnips raised on his own land. Who will talk like that when the State is everyone’s schoolmaster and employer? Admittedly, when man was untamed, such liberty belonged only to the few. I know. Hence the horrible suspicion that our only choice is between societies with few freemen and societies with none.

Speaking of free men – here is a wonderful free woman….I have seen a couple of interviews with her and she is a star – she has more sense in her head than all the presenters, doctors and politicians patronising her –  She reminds me of my mother who is also in her eighties and who has the same disdain for those who are seeking to restrict her in order to ‘protect’ her.   Echoing Lewis Maureen states “I didn’t vote for a scientist”!

That second video summarises for me what is so wrong with some aspects of our response.  Dr Sarah Davies is patronising, condescending, smarmy and dismissive.   Anyway back to Lewis…

Thirdly, I do not like the pretensions of Government –the grounds on which it demands my obedience– to be pitched too high. I don’t like the medicine-man’s magical pretensions nor the Bourbon’s Divine Right. This is not solely because I disbelieve in magic and in Bossuet’s Politique.[4- Jacques Benigne Bossuet, Politique tiree des propres paroles de L’Ecriture-Sainte (Paris, 1709).] I believe in God, but I detest theocracy. For every Government consists of mere men and is, strictly viewed, a makeshift; if it adds to its commands ‘Thus saith the Lord’, it lies, and lies dangerously. On just the same ground I dread government in the name of science. That is how tyrannies come in. In every age the men who want us under their thumb, if they have any sense, will put forward the particular pretension which the hopes and fears of that age render most potent. They ‘cash in’. It has been magic, it has been Christianity. Now it will certainly be science. Perhaps the real scientists may not think much of the tyrants’ ‘science’– they didn’t think much of Hitler’s racial theories or Stalin’s biology. But they can be muzzled.

We must give full weight to Sir Charles’s reminder that millions in the East are still half starved. To these my fears would seem very unimportant. A hungry man thinks about food, not freedom. We must give full weight to the claim that nothing but science, and science globally applied, and therefore unprecedented Government controls, can produce full bellies and medical care for the whole human race: nothing, in short, but a world Welfare State. It is a full admission of these truths which impresses upon me the extreme peril of humanity at present. We have on the one hand a desperate need; hunger, sickness, and the dread of war. We have, on the other, the conception of something that might meet it: omnicompetent global technocracy. Are not these the ideal opportunity for enslavement? This is how it has entered before; a desperate need (real or apparent) in the one party, a power (real or apparent) to relieve it, in the other

The question about progress has become the question whether we can discover any way of submitting to the worldwide paternalism of a technocracy without losing all personal privacy and independence.

All this threatens us even if the form of society which our needs point to should prove an unparalleled success. But is that certain? What assurance have we that our masters will or can keep the promise which induced us to sell ourselves? Let us not be deceived by phrases about ‘Man taking charge of his own destiny’. All that can really happen is that some men will take charge of the destiny of the others. They will be simply men; none perfect; some greedy, cruel and dishonest. The more completely we are planned the more powerful they will be. Have we discovered some new reason why, this time, power should not corrupt as it has done before?

All of this directly applies to today’s situation – we are in tremendous danger – not just from Covid 19, but from the response to it.  The cure is worse than the disease – and not just in the physical and mental health harms, nor even just the unjust and disproportionate harm to the poor; but also to the harm being done to our democracies, whose turning into technocracies (the wish of the corporations, the Chinese Communist party and ‘progressive’ elites throughout the world) has been given a turbo boost by the response to Covid 19.  Lewis over 60 years ago saw the danger we were heading into.  He was right.

I wrote about another essay of Lewis which is also prophetic in terms of our current situation.

Finally for those who claim they are following ‘the science’ I would hope that any sensible leader would go on scientific facts – but that they would recognise that there is not such thing as ‘The’ science – especially with a new virus that we are just learning about – and that science is not everything.  How many times has ‘The Science’ got it wrong?  This article lets us know – https://www.spectator.co.uk/article/The-ten-worst-Covid-data-failures

Besides which – as Lewis points out – there is way more to life than ‘the Science’.  I pray that this pandemic will remind us of that – and instead of driving us further into the dystopian Brave New World of the technocrats, we will return to the core of our Western liberal democracies – Christianity and freedom.