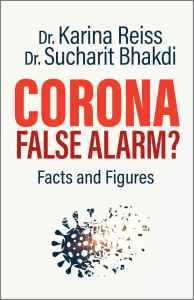 Corona False Alarm – Facts and Figures is a German book by Dr Karina Reiss and Dr Sucharit Bakdi.Published in June 2020 it went straight to number 1  selling 200,000 copies and 75,000 e-books in six weeks.

This blurb explains what it is about:

No other topic dominates our attention as much as coronavirus and COVID-19, the infectious disease it triggers. There’s been a global deluge of contradictory opinions, fake news, and politically controlled information. Differing views on the dangers posed by the pandemic have led to deep division and confusion, within governments, society, and even among friends and family.

In Corona, False Alarm?, award-winning researchers Dr. Sucharit Bhakdi and Dr. Karina Reiss give clarity to these confusing and stressful times. They offer analysis of whether radical protective measures—including lockdown, social distancing, and mandatory masking—have been justified, and what the ramifications have been for society, the economy, and public health. Dr. Bhakdi and Dr. Reiss provide dates, facts, and background information, including:

Corona, False Alarm? provides you with sound information and substantiated facts—and encourages you to form your own opinion on the corona crisis.

I found it to be a fascinating book full of facts, minus conspiracy theories and containing a great deal of calm common sense. I am in no position to judge but insofar as I can the case they make seems to be well researched and backed up with plenty evidence – although that does not mean I agree with everything they say – but what do I know?!  If the authors are even half right then our politicians and media will have a lot to answer for.  There is a sense in which I hope they are not….but I found their case hard to argue against.   Here are ten lessons I learned from it.  I would suggest you read the whole book for yourself and make up your own mind – it’s not long!

“COVID-19 is the designation for severe illness that occurs only in about 10% of infected individuals (16), but because of incorrect designation, the number of “cases” surged and the virus vaulted to the top of the list of existential threats to the world. Another serious mistake was that every deceased person who had tested positive for the virus entered the official records as a coronavirus victim. This method of reporting violated all international medical guidelines (17). The absurdity of giving COVID-19 as the cause of death in a patient who dies of cancer needs no comment. Correlation does not imply causation. This was causal fallacy that was destined to drive the world into a catastrophe. Truth surrounding the virus remained enshrouded in a tangle of rumours, myths and beliefs.

“What is wrong with Germany – and this whole world? Well, all the pictures disseminated so effectively by the international media – from Italy, Spain, England and then even from New York – coupled with model calculations for hundreds of thousands, or maybe even millions of deaths – planted the firm conviction in the general populace: It simply HAS TO BE a killer virus! “

Covid Deaths usually take place with those who have serious pre-existing conditions.

“Almost 96% of “COVID-19 deaths” in Italian hospitals were patients with pre-existing illnesses. Three quarters suffered from hypertension, more than a third from diabetes. Every third person had a heart condition. As almost everywhere else, the average age was above 80 years. The few people under 50 who died also had severe underlying conditions”

Respiratory viruses are a major cause of mortality worldwide, with an estimated 2–3 annual million deaths.

“Arbitrariness and the lack of a plan wound their way through the measures. At the beginning, facial masks were scorned and not used, even in overcrowded buses. But when the epidemic was over, it became mandatory. DIY stores could stay open for business while electronics markets had to close. Jogging was OK, playing tennis taboo.”

“Politicians entered a race for voter popularity – who could profit the most? Markus Söder, State President of Bavaria, presented himself as “Action Man”, emanating force and determination in front of the cameras, and declaring his intent to fight the virus to the finish with all the means at his disposal. Söder surges ahead with the first draconian measures: stay-at-home order for Bavarians as of March 21. No visits to loved ones in hospitals. No church services. Shops and restaurants closed. Among other incredible measures”.

According to Johann Giesecke, politicians wanted to use the pandemic to advance their own positions and were perfectly willing to implement measures that were not scientifically substantiated (196). “Politicians want to demonstrate their capacity to act, the capacity for decision making and most of all their strength. My best example for this is that in Asian countries the sidewalks are sprayed with chlorine. This is completely useless but it shows that the state and the authorities are doing something, and that is very important to politicians.”

“What did the government do wrong? It proclaimed an epidemic of national concern that did not exist It deprived citizens of their rights It made arbitrary instead of evidence-based decisions It intentionally spread fear It enforced senseless lockdown and mask-wearing It devastated the economy and destroyed livelihoods It disrupted the health care system It inflicted immense suffering on the populace”

“In fact, there is no study to even suggest that it makes any sense for healthy individuals to wear masks in public (136, 137). One might suspect that the only political reason for enforcing the measure is to foster fear in the population.”

“Drosten: We can learn this from the Spanish flu. It started at the end of the First World War, and most of the 50 million victims died during the second wave. That is true. But at the time of the Spanish flu, antibiotics were not available to treat secondary bacterial infections that were the main cause of death (139). Consequently, people of all ages died. Whoever compares COVID-19 to the Spanish flu is either completely clueless or deliberately intends to spread fear. It is clear that viruses change but do not simply disappear. Just as there has always been a flu season, there has also always been a coronavirus season (140).”

“It will strike all countries. The global economic crisis could plunge 500 million people into poverty, so stated in a position paper by the UN (172).”

“In Germany, more than 1,000 people over the age of 80 die every day (185). While we are taking drastic measures to prevent them from dying of COVID-19, we are making their lives less worth living. This cannot but impinge on life expectancy. “

“In India, there are hundreds of millions of day-labourers, many of whom led a hand-to-mouth existence before the coronavirus restrictions robbed them of their livelihoods. Now they have no more means to survive. They are “protected” against the coronavirus and are in turn left to starve. “

“Vaccination campaigns against the measles were suspended in many countries. Although measles rarely cause death in western countries, 3–6% of the infected people in poor countries die, and those who survive often have life-long disabilities. The virus has claimed 6,500 child deaths in the Congo Republic (192). Between 2003 and 2013, Zimbabwe succeeded in lowering yearly malaria infections from 155 per 1,000 inhabitants to just 22. Now, and within a short time, there have been more than 130 deaths and 135,000 infections. Two thirds of all fatalities were < 5-year-old children. According to the WHO, malaria deaths in sub-Saharan Africa could rise to 769,000 in 2020, which would double the number for 2018. If so, they would be thrown back to a “mortality standard” of 20 years ago. The probable reason for this catastrophe is the fact that insecticide-treated mosquito nets can no longer be adequately distributed. Are the malaria deaths in Zimbabwe and the measles deaths in the Congo only precursors of what is in store for the continent?”

“In the authors’ view, a global vaccination programme thus makes no sense. The risks far outweigh any possible benefit right from the start. Experts around the world express their concerns and warn of rushed COVID-19 vaccines without sufficient safety guarantees (214, 215). “

“A nationwide vaccination with the hastily produced and barely tested H1N1 vaccine was recommended. 60 million doses of adjuvanted vaccine were purchased for the German population. The non-adjuvanted vaccine was obtained only for high members of the government (229). Again, this all happened when it was clear that the swine flu pandemic had run a light course. The majority of the public decided wisely against the senseless vaccination. What was the end of the story? Trucks loaded with over 50 million expired vaccine doses were disposed of at the Magdeburg waste-to-energy plant. As was taxpayer’s money … no, actually not, the money just changed hands. Estimated profit for the pharmaceutical industry: 18 billion US dollars (230).”

“It’s easier to fool people than to convince them that they have been fooled. (MARK TWAIN)

In a working democracy, the media should provide the public with truthful news, foster opinion formation through critique and discussion, and oversee the action of the government as the “fourth public authority” with impartiality and autonomy. What we have experienced during the coronavirus pandemic is just the opposite (233). All public broadcasters became servile mouthpieces of the government. The press was no better. Regard for the truth, protection of human dignity, service to the public – the Press Codex disappeared from the scene. Worldwide.”

“Susan Wojcicki, CEO of YouTube, said during an interview (240): “Everything that violates the recommendations of the WHO would constitute a breach against our guidelines. Therefore, deletion is another important part of our guidelines.” The WHO that was responsible for the fake swine flu pandemic in 2009; The WHO that overestimated the COVID-19 mortality on a large scale, and drove the world into a crisis with this and other misjudgements? This same WHO that now sets the standard on what can be said?”

The Rich will benefit – the poor will suffer.

The stock market professional, Dirk Müller, gave a persuasive explanation why the pandemic was a blessing for many (244): in short, because it is always the same story: Big companies win, small ones lose. Big corporations will survive while many small and midsize companies as well as private businesses will perish. Finance professor, Stefan Homburg, called it “the largest redistribution of wealth in peacetime”. The loser would be the taxpayer (245).

When they say that Covid 19 has killed more than one million people they are lying.  One million people who have Covid (and possibly many more) have died – one million people have not been killed by Covid.     When they make comparisons between the number who die of an illness worldwide and those who died in one terrorist attack, they are being irrational.  When they ignore the fact that 45 million other people have died this year who did not have Covid, they are being both irrational and heartless.  It is estimated that today about 4,000 people will have died of Covid, 22,000 will die of hunger – no mention in news media and no stopping economies for them.  So far this year there have been  6 million deaths from cancer, 850,000 suicides, 3.8 million deaths caused by smoking, 1.9 by misuse of alcohol, more people have died in road traffic accidents than have died of Covid, never mind the unspeakable tragedy of 32 million babies being killed in the womb this year so far…).