Today I am heading to speak at a senior Sydney secondary school….so I thought I would post this latest article on the subject of Christian education.  It was good to be back in my old patch on The Record this month.  John Macdonald has maintained the standards and edits a well produced and stimulating magazine.   The main theme of this issue was education – and I would recommend the articles on Home schooling and state schools.   I wrote one on Christian schools – the text of which is below.  Perhaps next week I will respond to the one on State schools, which makes a good, but fundamentally flawed case…?! 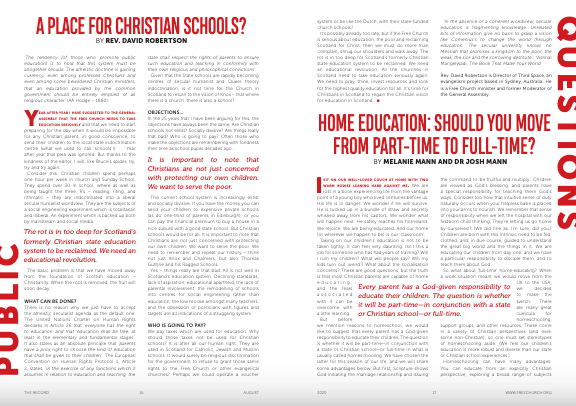 A Place for Christian Schools?

It is important to note that Christians are not just concerned with protecting our own children. We want to serve the poor.

The rot is in too deep for Scotland’s formerly Christian state education system to be reclaimed. We need an educational revolution.

The tendency [of those who promote public education] is to hold that this system must be altogether secular. The atheistic doctrine is gaining currency, even among professed Christians and even among some bewildered Christian ministers, that an education provided by the common government should be entirely emptied of all religious character’ (AA Hodge – 1880).

Year after year I have suggested to the General Assembly that the Free Church needs to take education seriously and that we need to start preparing for the day when it would be impossible for any Christian parent, in good conscience, to send their children to the local state indoctrination centre (what we used to call ‘schools’!).    Year after year that plea was ignored. But thanks to the kindness of the editor, I will, like Bruce’s spider, try, try and try again.

Consider this. Christian children spend perhaps one hour per week in church and Sunday School. They spend over 30 in school, where as well as being taught the three ‘R’s – reading, riting, and rithmatic – they are indoctrinated into a liberal secular humanist worldview. They are the subjects of a social engineering experiment which is totalitarian and illiberal. An experiment which is backed up both by mainstream and social media.

The basic problem is that we have moved away from the foundation of Scottish education – Christianity. When the root is removed, the fruit will soon decay.

There is no reason why we just have to accept the atheistic secularist agenda as the default one. The United Nations Charter on Human Rights declares in Article 26 that ‘everyone has the right to education’ and that ‘education shall be free, at least in the elementary and fundamental stages’. It also states as an absolute principle that ‘parents have a prior right to choose the kind of education that shall be given to their children’. The European Convention on Human Rights Protocol 1, Article 2, states, ‘in the exercise of any functions which it assumes in relation to education and teaching, the state shall respect the rights of parents to ensure such education and teaching in conformity with their own religious and philosophical convictions’.

Given that the State schools are rapidly becoming centres of secular humanist and Queer theory indoctrination, is it not time for the Church in Scotland to return to the vision of Knox – that where there is a church, there is also a school?

In the 25 years that I have been arguing for this, the objections have always been the same. Are Christian schools not elitist? Socially divisive? Are things really that bad? Who is going to pay? Often those who make the objections are remembering with fondness their time as school pupils decades ago.

The current school system is increasingly elitist and socially divisive. If you have the money you can send your children to expensive private schools (as do one-third of parents in Edinburgh), or you can pay the financial premium to buy a house in a nice suburb with a good state school. But Christian schools would be for all. It is important to note that Christians are not just concerned with protecting our own children. We want to serve the poor. We need to remember and repeat our history – think not just Knox and Chalmers, but also Thomas Guthrie and his Ragged Schools.

Yes – things really are that bad. All is not well in Scotland’s education system. Declining standards, lack of aspiration, educational apartheid, the lack of parental involvement, the remodelling of schools into centres for social engineering rather than education, the low morale amongst many teachers, and the obsession of politicians with figures and targets are all indications of a struggling system.

Who is going to pay?

We pay taxes which are used for education. Why should those taxes not be used for Christian schools? It is after all our human right. They are used in Scotland for Catholic, Jewish and Muslim schools. It would surely be religious discrimination for the government to refuse to grant those same rights to the Free Church or other evangelical churches? Perhaps we could operate a voucher system or be like the Dutch, with their state-funded church schools?

It’s possibly already too late, but if the Free Church is serious about education, the poor and reclaiming Scotland for Christ, then we must do more than complain, shrug our shoulders and walk away. The rot is in too deep for Scotland’s formerly Christian state education system to be reclaimed. We need an educational revolution. All the churches in Scotland need to take education seriously again. We need to pray, think, invest resources and look for the highest quality education for all. It’s time for Christians in Scotland to regain the Christian vision for education in Scotland.

‘In the absence of a coherent worldview, secular education is fragmenting knowledge. Unrelated bits of information give no basis to grasp a vision like Comenius’s to change the world through education. The secular university knows no Messiah that promises a kingdom to the poor, the weak, the sick and the sorrowing destitute.’

Rev. David Robertson is Director of Third Space, an evangelism project based in Sydney, Australia. He is a Free Church minister and former Moderator of the General Assembly.

The Free Church and Education