“Liberate Hong Kong, Revolution of our times“. Just a word of advice: don’t wear that on a T-shirt or even say it if you are visiting Hong Kong. It’s not just that it’s unwise; it is now illegal. Indeed it is illegal for any Hong Kong citizen to say that anywhere in the world – according to the Chinese government. It’s little wonder that Nathan Law, the young founder of one of the Hong Kong democracy groups, is leaving.

In 1997, the UK handed Hong Kong back to the Chinese government with a legal treaty guaranteeing a ‘one country two systems’ approach. This week China has just ripped up that treaty and declared that it is now against the law to speak out or campaign for democracy in Hong Kong.

The new national security law makes it against the law to criticise the Communist government, allows for closed door trials, wiretapping and for suspects to be taken to mainland China. The People’s Daily tweeted: “All of us are also happy to see a peaceful society coming back again in recent days. Hong Kong residents warmly welcome National Security Law.” This is an Orwellian interpretation of ‘peace’ and ‘all of us’. 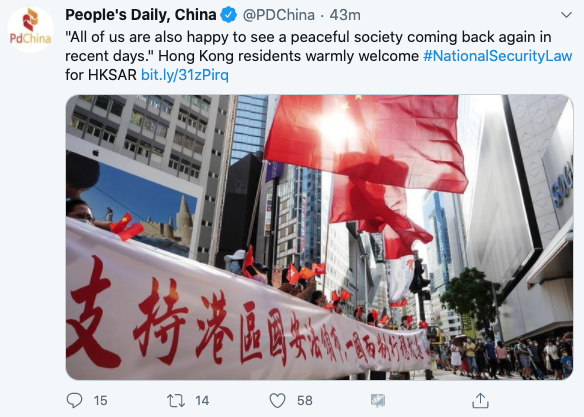 Why does all of this matter?

Hong Kong is a significant global city with many connections to the UK. It has a population of over 7.5 million people and a GDP of $362 billion – more than the nation of Denmark. Three million Hong Kong citizens either have or are eligible for a British National Overseas passport. After the imposition of the new national security law, the UK government announced that all three million would be eligible to come to the UK. Australia is also expected to announce that Hong Kong refugees will be welcome.

The Chinese government is furious and has stated that all Hong Kongers are Chinese nationals and will not be permitted to leave. In effect the Chinese government is going to turn Hong Kong into a giant prison camp. Some in the West hoped that the law would be passed but not acted upon. Some hope. Within hours of the law being passed, over 300 were arrested.

The CCP are able to do this not just because the world is distracted by the Covid-19 crisis, but because they have reckoned that no-one will stop them. Only the Americans have the economic and financial muscle to make any difference – and they are too busy tearing themselves apart.

Meanwhile much of the Western world, from academia and political leaders, to business and the big corporations, have been bought by the Chinese. Western ‘progressives’ are more than happy to bravely ‘call out’ the US for racism, but never say a word about the Chinese government’s brutal racism.

There is little doubt that the Chinese government is committing genocide against the Uighur Muslims in Xinjiang, north-west China, where gulags, forced abortions and sterilisations, the removal of children from parents, and the never-ending propaganda and brainwashing are threatening to erase the Uighur people. More than a million have been detained.

We know this. And yet we do nothing. China has a seat on the UN security council, it is a dominant voice in the WHO and numerous other international bodies – and we do nothing. Our politicians are largely silent and our corporations likewise. In fact, some go even further. For example, HSBC and Standard Chartered both made statements welcoming the new security laws, saying they will bring ‘stability’. These are corporations who prove their ‘woke’ credentials by speaking out for all the right causes but feel free to back an authoritarian, anti- democratic despotic regime.

Why? It’s all about the money. They’ve been bought and sold for Chinese gold. When banks supported the apartheid regime in South Africa, churches and other campaigners led a disinvestment campaign. Will the Church now do the same for HSBC and Chartered?

And what about the Church?

Why should we be concerned? Apart from the social justice issues and our concern for the peace of the world, there are almost a million of our Christian brothers and sisters in Hong Kong. Over 500,000 profess to be Protestant, with some 1,300 congregations in over 50 denominations. There are 384,000 Catholics. Many of the Christians are young people and many of them have been involved in the protest movements. Christians songs were often sung along with the other protest songs.

The CCP hates the Christian church and we can only fear for what the Christians in Hong Kong will face in the coming years. I have a number of contacts in Hong Kong as well as some people in my church who have relatives in the city. They are deeply concerned.

In one sense the situation in Hong Kong is a real test for the Church in the West, as indeed it is for the countries of the West. If we only have voices for the politically approved causes of our own culture, but no time for situations in a land far away, how are we reflecting the command of Christ to be salt and light in the whole world? Do we truly care or are we just interested in signalling our virtue in our own culture?

The English Premier League – has recently repented of its policy not to permit political statements on players’ shirts. It will be interesting to see if they now allow Mesut Ozil to wear a “Uighur Lives Matter” slogan on his shirt. When Ozil spoke out about the issue, the Chinese government pulled the plug on Arsenal’s fixture against Chelsea. The English Premier League (EPL) remained silent.

Wolverhampton are fully Chinese owned; Manchester City have 12% Chinese investors; Bournemouth and Crystal Palace have sponsorship deals with Chinese companies. The EPL has a £500 million deal to screen matches in China. When money talks, hypocrisy reigns. I suspect it will be a long time before any Premier League team is ‘taking the knee’ for the repressed people of Hong Kong – or the Uighurs.

I wonder if as well as money there is a more subtle form of racism at play here. We are more interested in America and the West, than we are with China and the East. Bill Hamilton, a leading biologist who had a profound effect upon Richard Dawkins, once declared that he would grieve more for the death of one giant panda than he would for “one hundred unknown Chinese”. It’s an extreme attitude but one that in other forms I have come across disturbingly frequently.

The Church is growing exponentially in China – with perhaps 100 million people following Christ. Do Chinese lives matter? They do to Christ – and they should to us.

What Can We Learn from the Chinese ‘Badass Beauty Queen’?