Glen Scrivener is a gifted Australian evangelist who lives and works in England.  He produces some quality videos – none more so than this one.  It tells an incredible shocking story.

In the time that hundreds of thousands have died with Covid 19; 20 million have been killed by abortion.

Black lives matter – but not if they are in the womb.  Margaret Sanger, was a noted eugenicist, who formed Planned Parenthood.  She believed in abortion as a means of reducing the number of black people.

“Before eugenists and others who are laboring for racial betterment can succeed, they must first clear the way for Birth Control. Like the advocates of Birth Control, the eugenists, for instance, are seeking to assist the race toward the elimination of the unfit. Both are seeking a single end but they lay emphasis upon different methods.” “Birth Control and Racial Betterment” (1919):

The government should] “give certain dysgenic groups in our population their choice of segregation or sterilization.” (A Plan for Peace – 1932)

She wrote in 1938 praising Hitler’s eugenics programme in getting rid of the disabled and the weak.   And yet in a time when we are tearing down images of people from the past, she is lauded and praised.

I was impressed by this article in which an African-American woman explained about the targeting of black women for abortion.

Many of us are tired of the targeting. 78% of Planned Parenthood’s surgical facilities are located in Black and Latino neighborhoods. Black women such as Cree Erwin, Lakisha Wilson, and Tonya Reaves have lost their lives at the hands of an abortion industry that offers substandard medical care as increasingly women are leaving abortion centers by ambulance.

While they showcased examples of the progress Black Americans have made, an ache remains in my heart because of the denial of equal protection and due process to another class of people – the baby in the womb. The sacrifices my ancestors suffered to achieve the freedom and civil rights I enjoy today are not able to protect future generations from a decision made just 8 years before my birth. The Roe v Wade decision rendered 60,000,000 lives unworthy of legal protection and has led to the deaths of over 20 million Black babies since 1973.

I wonder if BLM think these black lives matter?  Or perhaps its the price of dismantling capitalism and the patriarchy that we kill the children in the womb? 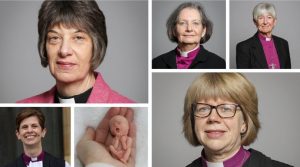 Meanwhile back in the UK we have bishops in the House of Lords.  They are bishops of the Church of England which has a policy opposed to abortion.  Yesterday they had the opportunity to vote to put that policy into practice when the House of Lords voted on the Northern Ireland abortion bill.  As this article records  nineteen bishops abstained – thus allowing the law to be passed 355-77.   We give thanks that the Archbishop of Canterbury and six other bishops voted against.   The six female bishops were among those who abstained.

“‘Can a mother forget the baby at her breast and have no compassion on the child she has borne?’ asks the prophet Isaiah. The answer appears to be yes, if she happens to be a bishop in the Church of England,” lamented Dave Brennan, director of pro-life Brephos.
“One argument for having bishops with ‘real-life experience’ is that they can apparently bring their insights to bear on ‘real-life’ issues,” Brennan noted. “But that hasn’t happened with bishop of London Sarah Mullally who, despite having been a midwife and the U.K.’s chief nursing officer, is mum on abortion.”

What is particularly sickening is that some of these bishops who abstained on the most important life and moral issue facing the nation, had no qualms about expressing their anger over Dominic Cummings .  The one that saddened me the most was Nick Baines, bishop of Leeds, a former evangelical – now betraying the cause he once stood for.   He was upset about Cummings taking his child to his grandparents, but silent about the government permitting the killing of thousands of babies in Northern Ireland. Talk about an inverted (and perverted) sense of proportion!   Nothing illustrates the pitiful state of the Church of England than its leaders complicit silence in this wickedness.

In another shocking revelation this week the Department of Health and Social Care released the abortion statistics for England and Wales for 2019. The number of abortions that took place in 2019 was 209,519, the highest ever since the passing of the Abortion Act in 1967.  I remember hearing David Steele speak and him saying that that he had expected the number of abortions to be about 6,000 per year and certainly no more than 20,000.   He was over 200,000 out.

As Glen points out in the above video – the scale of death due to Covid is large and tragic.  The scale of death because of abortion is massive.  Every three months we kill in the UK as many human beings as Covid will in a year.  Every three months.  We stop the economy to prevent some deaths.  We kill many more to protect the economy (95% of abortions and for economic and social reasons).    It’s an evil whose stench reaches to heaven.

Our politicians are united in this.  Boris Johnson, who was sacked by the Tories from their front bench in 2004 over allegations he paid for his mistress to have an abortion, Nicola Sturgeon,  Keir Starmer and even church member Ian Blackford are all supportive of abortion and imposing it on Northern Ireland (despite the NI Assembly vote last week to reject abortion).   But what about the rest of the church?

I looked on the Church of Scotland website – nothing.  The Baptist Union?  Nothing – not even on their safeguarding and protection children part – although they did have a statement about the horrific death of George Floyd.  The Methodists – again plenty about racism.  Nothing about abortion. Why can’t they have both?  Do some lives matter more than others? One can only thank God for the Catholic Church which manages to comment on many social issues and is always strong on the defence of the unborn.   I hope that Evangelical Alliance, FIEC and the Free Church, who are usually pretty good on these matters, and other smaller churches will issue statements if they have not already done so,  when they get the chance.   After all it is our MPs who will be voting this through.   Is there any social subject more important than this?

Reflecting on all this is profoundly sad.  I realise that there are many faithful Christians who join with our Catholic brothers and sisters in seeking to protect the unborn – but it is the cowardice and inhumanity of our leadership which makes me shudder.  It’s not the nation that is under the judgement of God but the church.  When will we speak up for those who cannot speak for themselves?

I know that Glen will get a lot of flak for his stance on this video.  But I praise God for his courage and willingness to use his abilities to bring the truth.  His video should be widely shared.  Please do so…and pray for and stand with him.  The bishops certainly won’t.

Speaking Up – The September Record