Those of us who love the USA have been watching with a mix of horror and despair as we observe the havoc being wrecked by the racism that was a major cause in the death of George Floyd, and the riots in reaction to it.

Are We Witnessing the End of the USA?

When this has been added on to the fear, death and economic destruction caused by Covid, it seems as though the US is in deep trouble. Are we witnessing the end of US hegemony in the world? Are we witnessing the end of the US as we know it? Some will wish that it were so. For them the end of the US is good news – although they have no idea what the world would be like without the US. For me and many others, we are watching the decline of the US with a growing sense of dread. Is there no good news?

An astonishing documentary film on Netflix at least partially answers that question. American Gospel is a two-hour film and a fascinating exposé of the prosperity gospel – which it shows as no Gospel at all. But the documentary is much, much more. Most of all it tells us what the real good news is. John Piper, Jackie Hill Perry, Matt Chandler, Julius Kim, Ray Comfort, Paul Washer and many others give us great good news! It’s a long time since I have seen a film that could make this Scottish Presbyterian raise his hands and shout hallelujah like the most fervent charismatic!

The prosperity gospel is not the good news that America needs. Yet it is in American soil that it thrives the most. What is the prosperity gospel? Let me share it as I have experienced it in Scotland. I was at a meeting where the preacher declared “why have a Mini when God can give you a Rolls Royce”. She then went on to talk about ‘sowing seed’ before passing round a bucket and saying that if we put £10 in, we would get £100 back.

The prosperity gospel is the idea that God will give you whatever you want (money and health – i.e. prosperity) if only you have enough faith (and of course sow your seed!). It’s sometimes known as the Word of Faith movement.

Another time I was with my friend, Duncan, at a Christian meeting. Duncan had muscular dystrophy and was in a wheelchair. We knew the prognosis was that he would have a couple of years to live. The preacher at that meeting told Duncan that if he just had enough faith he could get up and walk out of that wheelchair. That’s the nearest I ever came to punching someone at a meeting! It was a cruel and wicked thing to say.

The prosperity gospel is no good news at all – because if you don’t get out of the wheelchair, or if you are poor, it’s your fault. It’s your lack of faith. If on the other hand you make $700 million out of preaching it (the reputed worth of Kenneth Copeland, one of its most famous exponents) that’s because you deserve it…you have the faith.

Perhaps the most enlightening part of the documentary is the interview with Costi Hinn (nephew of Benny Hinn). He talked about how as a prosperity gospel preacher it was hard to live with the fact that he and his colleagues turned away people who brought their sick babies to be healed, while they lived in the luxury of their offerings.

This is not the Gospel that America needs just now (or ever). So what is? I think that the American Gospel does a good job of explaining what the Gospel is – but there is still something missing in its application. While the film is right to deal with the heresies of the prosperity gospel, I think that we also need to look at other ways that the church has failed in its communication of the Good News. Three things I read were extremely helpful in understanding this.

Firstly, the historian Tom Holland wrote a brilliant article “America is the Greatest Story Ever Told”. In it he traces how from the beginning, America was founded upon and deeply steeped in Christianity. But things have changed:

“Today, although Martin Luther King’s people may remain stranded in the wilderness, the Bible no longer structures the dread and the dreamings of Americans in the way that once it did. The book which for King had been a supreme inspiration has chiefly played a role in the current crisis as a prop held upside down by President Trump. Yet the tracks of Christian theology, as Nietzsche once complained, wind everywhere.”

Secondly was this remarkable tweet from Beth Moore, an influential American evangelical “I think we are experiencing a divine reckoning in America. I don’t think the reckoning is over our having simply sinned. I think it’s over the fact that we have used God & the Bible to do it.”

It’s not just the misuse of the Gospel to sell the consumerist ‘American dream’. Nor the way that politics and religion have become so intertwined in a state that was designed to prevent that happening. A W Tozer wrote in 1953,”The religion so common in the United States today, which confuses Caesar and makes Christianity and Americanism one and the same thing, has resulted from a blind misunderstanding of the whole Christian position. It has no justification in the New Testament.” 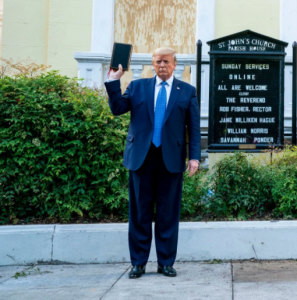 Much of the US church has, as Moore indicates, sold its biblical birthright for a mess of such works-based self-righteousness. Thankfully as, American Gospel shows, that is not the whole church.

Which leads me to a third article – by Professor James Eglinton of the University of Edinburgh entitled ‘Bavinck on Racism in America’. Herman Bavinck was a famous Dutch theologian who travelled to North America twice – in 1892 and 1908. His observations more than 100 years later are still apposite. He considered the most difficult aspect of American culture to be its deep-seated racism. In 1909, in a lecture in Rotterdam, he warned:

“In the future, there truly lurks a danger, and in the future a struggle will doubtless be fought between black and white, a heated struggle, fanned into flame by the strong antipathy on both sides.”

What is the answer to this? It cannot be the ‘white supremacists’ who will only make the problem worse. Nor is it the woke identitarians whose methodology suggests that we should jump out of the frying pan into the fire. The weak Christians, who talk and sing about love, don’t have a solution because they have no gospel of salvation to preach to the lost because they don’t believe that people are lost, and they struggle to define what love actually is!

Eglinton points out the answer that Bavinck gave in 1909. Only the way of religion can prevent future bloodshed, because the Gospel teaches that ‘the whole human race is of one blood’. I would also add that in order to prevent bloodshed, we need to accept the blood of Jesus Christ – his atoning sacrifice for our sin. Sometimes racism, like other sins, is so deeply ingrained in the human heart, that we need a new heart to drive it out. Only Christ and his work on the cross, can atone for the past, give us a new heart, and lead us into a brighter future. America needs less of American cultural religion and more of the Good News of Christ.

This need was demonstrated in a surprising way this week on the James Corden show – where, in responding to President Trump’s bible photo op, he got his father to come and show how to properly hold a Bible. Malcolm Corden was a Bible salesman.

What struck me about this clip – was not just the humour but rather the clear affection between father and son, an affection which allowed Malcolm to read the first eight verses from Psalm 37. “Be still before the Lord and wait patiently for him.” It was a moving and beautiful moment – in the midst of great ugliness.

After another Christian loses faith, is convenience Christianity to blame? CT