Third Space are, in colloboration with Eternity  producing a new podcast called Life in Wartime.  You can subscribe either on the Eternity link above or on the Third Space website here– Each podcast lasts just over 17 minutes. 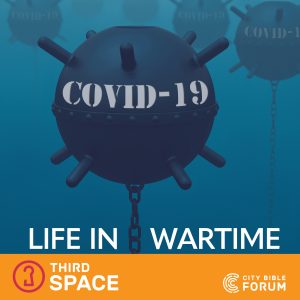 To many people we are living in an unreal and somewhat surreal time. Many people have lost their jobs, some their lives; others feel like they are losing their sanity – as the normal touchstones of life have gone – no sport, concerts, church, parties, cinema, restaurants, playgrounds. It feels like we are at war.   And to some degree we are. Which is where the idea of this podcast came from. There is plenty of news about the war against Covid 19 – the weapons we use, the measures being taken and the impact this is having on wider society.   But life goes on.

And that is both the burden and the beauty of being human. God has made everything beautiful in its time He has also set eternity in the human heart; yet no one can fathom what God has done from beginning to end…what a burden has been laid upon us! (Ecclesiastes 3:11).   In wartime, after a tragedy, in the midst of illness and stress – life goes on. And all the things that make life not only bearable but worth living go on. So, inspired by C S Lewis, Steve McAlpine and I thought we would do this series of podcasts on Life in Wartime.

Why C.S Lewis? Firstly because it was in the middle of the Second World War that he gave his series of talks for the BBC which would end up becoming the classic evangelistic book of the 20th Century – Mere Christianity.   Secondly because of a sermonhe gave at the outset of the war entitled Learning in Wartime. In this sermon Lewis reminds us that not only does life go on, but in some degrees it goes on in a much clearer light. The war does not so much change the human condition as reveal it.

In these extraordinary times, I would like to say that I have just been sailing through, calmly taking everything in my stride. But it would not be true. Like everyone else there are moments of anxiety, stress, worry and concern. Sometimes it is the darkness of the bigger picture, sometimes the tiny pixels within one’s own circumstances – but life goes on. And for that light to flourish we need light – the Light of Christ.   And that is what this podcast is about looking at how life goes on in the war that we are currently engaged in.

I hope and pray that it will be helpful to you, and to the Church.   As Lewis says in his sermon we do not think we can build heaven on earth but we do hope that we will be able to in our own small way, offer an ‘approach to the Divine reality and the Divine beauty which we hope to enjoy hereafter’. Why not join us every week?

And here is the official summary of the podcast

C.S. Lewis helped a generation of Christians think through what it meant to live for Christ during a time when death was falling from the skies. Now we face the same challenge to our mortality in the very air we breathe.

As Australia prepares to remember ANZAC Day, two sharp thinkers challenge us to think through what it means for Christians to experience ‘Life In Wartime’.

Social commentators David Robertson and Stephen McAlpine from Third Space explain the similarities between life during the COVID-19 pandemic and life during other global struggles. What particularly runs parallel are the spiritual challenges we will face as Christians in the months and years to come.

WHAT IS LIFE IN WARTIME?

The COVID-19 epidemic has brought upon us all the moral challenges associated with living in a state of constant conflict. We have to choose how we’re going to respond to this global threat day by day, and David Robertson and Stephen McAlpine from Third Space are here to help you think through the implications of the messages we’re hearing, and how God would have us live in these challenging times.