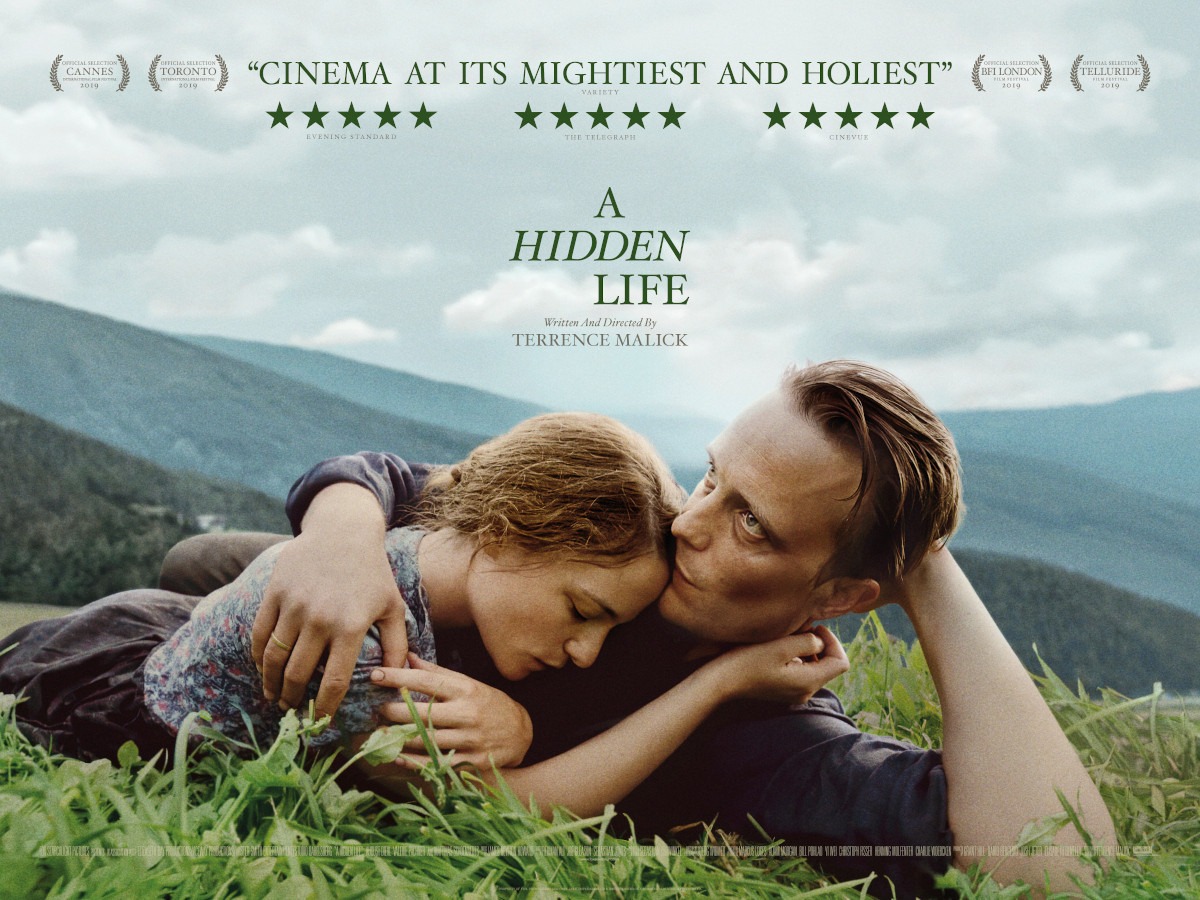 Terrence Malik is my favourite director – bar none. I find all of his films to be extraordinary and they have a profound effect upon me – in every way. In 2011 I saw The Tree of Life. Then I was taken into hospital and almost died (you can read the story here)  A couple of months after getting out of hospital Annabel and I resumed our Friday night dates at the Dundee Contemporary Arts centre. The choice was obvious – we would watch the latest Malik film – But then I had the strangest experience. Although it was not a particular weepy I could not stop crying – the tears poured down my face. At the end Annabel asked if I was ok, and I said – I’m not, I can’t move. I have no idea what had come over me and to be honest it was quite scary. Annabel was amazed and told me of what happened in hospital. When I had my illness and was in an out of a coma in hospital in 2011 I watched The Tree of Life on DVD, but as I watched I could not stop crying. So they took my laptop away from me. I had no memory of any of that. But the point was that my reaction, physically, emotionally and spiritually in the DCA was exactly the same. The human mind is an amazing thing.

So it was with a degree of some trepidation that I went to the Dendy in Newtown to watch Malik’s latest film – A Hidden Life. Would I have the same reaction?   But there was also a large degree of anticipation – this was not only my favourite director but on one of my favourite subjects – the reaction to the Nazis.

I was not disappointed. A Hidden Life is a masterpiece. The instantly recognizable Malik cinematography (in this instance making the mountains the star of the film) and the sparse dialogue with the lengthy voiceovers. One of the great things about Malik films is that the actors are not the centre of the film.   Then there is his obsession with religion which shines through in this film.

Not the Sound of Music

Sadly the film would never get an Oscar. It’s long and difficult. Despite having the Austrian mountains and the Nazis, this ain’t The Sound of Music. I found it difficult – not in the psychological reaction of my previous Malik experiences – but because this is a film that goes really deep.   I found it took me to areas and places that were hard to go. Issues of faith, evil, darkness, suffering – all the questions I have.   It’s really hard to explain but I found it to be a cathartic and profoundly emotional, healing and helpful film. I don’t expect everyone – or even anyone to agree – Malik is an acquired taste and that combined with my previous experiences probably make my take fairly unique.   But let me go through some of the quotes I took from the film which may explain.

There is a scene near the beginning where Franz Jägerstätter is talking to the mural in the church. The artist explains “I paint the comfortable Christ – one day I will paint the real Christ’. This film paints the real Christ.

The complicity of the church and its misuse of Scripture in refusing to challenge the State.   For example the scene where the bishop cites Romans 13 and the need to obey the State. In the early church the Christians were persecuted by the Roman State because they refused to swear an oath acknowledging Caesar as Lord.   Franz had the same dilemma – could he take an oath to serve Hitler?   He refuses because to do so would swearing an oath to the anti-Christ.

Speaking of the church – one of the most breathtaking scenes is where the priest tells Franz “God doesn’t care what you say, only what’s in your heart.”  That sounds so spiritual – but it is such a cop out. It is precisely because of what is in his heart that he cannot be untrue to his own conscience.

This is the antithesis of Hollywood where the good guys are obvious as are the bad. But Malik is much more realistic.   He is so realistic that it messes with your head and heart.   For example there is the footage of Hitler in the mountains – idyllic, joyful, full of fun with his family. Then there are Franz’s own children – they are always there – laughing, crying, playing but there is no dialogue with them. No heartfelt pleas, no tugging of the heart strings as the children speak.

There are the theological questions – “Why have our prayers not been answered?’  If we are faithful to him he is faithful to us. He who created this world – he created evil. Your God has no pity, he left us, abandoned us – like he did his Son, your Christ”. “Where can we find peace – The animals who have no reason have peace, but we who have the gift of understanding do not know peace. “: This is the burden of humanity.

The world is insane, says one of the villagers – there is no cure.

Why Take a Stand?

What’s the point of taking a stand? What can you do? We are but a breath and you can’t change the world – or the course of the war?   Franz is told by one of his interrogators – you shine the soldiers shoes, you fill their sandbags – are you innocent? And there Malik exposes a profound and disturbing truth. It’s not just the soldiers killing people – but all those involved in the whole system – the politicians, lawyers, judges, villagers, clergy. To be silent and to carry on is to acquiesce. I found this part particularly challenging. “Do you have a right to do this? Do I have a right not to? “

Another time one of the interrogators mocks Franz –   “How do you know what is good or bad? Did heaven tell you?”

The Point of Suffering

And of course the question of suffering. There is a difference between the suffering we can’t avoid and the suffering we choose. His wife declares, “No evil can happen to a good man”. Yet later on that confidence is replaced with doubt and fear…‘Lord you do nothing’.   Where are you? Why did you create us?”

Speaking of suffering – when Franz was in prison he was on his own in his cell – with nothing to read or do. Yet he found that to be a tremendous liberation. I contrasted that with the person in front of me who could not sit for 15 minutes without looking at his phone! Franz’s thoughts at this point are stimulating – ‘bound hands are better than to have your will bound’. “When I gave up the idea of surviving at any price, new light came in.

The whole film was profound and beautiful but especially the end scenes in the prison and the execution – which, Hitchcock like – Malik leads us up to, makes perfectly clear what is going to happen, but does not let us see it. It is all the more intense and real for that. What stunned me was the constant quotation of the psalms – Ps 23 in particular, in prison and the Lord’s Prayer… ‘Darkness is not dark to you, bring us to your eternal light, to the true and never failing light’.

Give me strength to follow you. Spirit – lead me – show me.

Why did Franz not sign the oath and go free? The pressure on him was unbearable but he still argued that it was better to suffer injustice than to do it.

The agony builds. The pressure mounts. The sense of evil and despair is overwhelming. The sheer meaninglessness of it all. But Malik does not leave it there. Despite the sad inevitable ending – there is great hope portrayed in this film.

The Hope of the Risen Christ

For example take Franz’s wife. With all her agonizing, doubts, fears and angers she can still pray – “You love him more than I do – give him courage, wisdom, strength…Thank you Father!” She is given strength to tell him –  “I love you whatever you do – I am with you always.   Do what is right”.

She tells the children “ Your father will be dead – we will meet again.” The hope of the resurrection is deep.   Even in the most profound ugliness as he is executed, the birds are singing and the Lord’s Prayer ‘deliver us from evil’ is answered.

At one point the accusation is made ““He died in vain. He came it was all for nothing.”  But it wasn’t.   The death of Jesus enabled Franz to take his stand against evil and win.   The cry is made – “If we could only see the beginning of his kingdom.” And the answer is given in the film….this is the beginning.

As one reviewer put it – this is cinema at its holiest.  For me this is Wilberforce, Schindler’s List and The Tree of Life – all rolled into one.  I am profoundly thankful for it. And shattered by it.