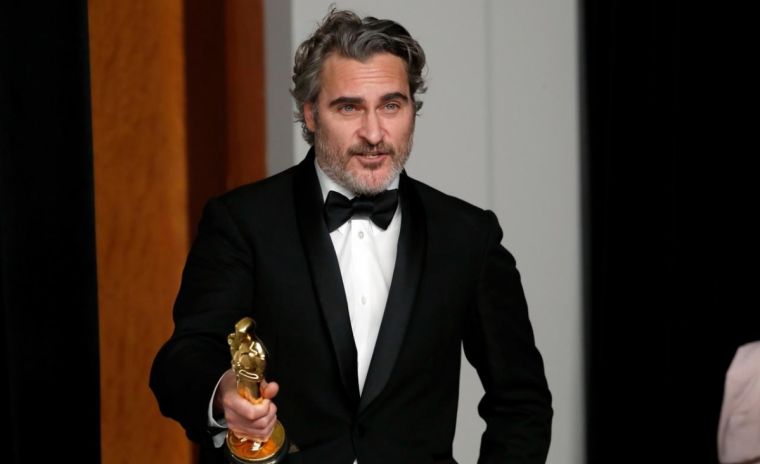 Congratulations on your Oscar. Long overdue. You should have had one for your stunning portrayal of Johnny Cash in Walk the Line – still one of my favourite films.

But your speech. Wow. You gave us a sermon! I am a preacher and I am constantly told preaching is going out of vogue – well not if Hollywood is anything to go by. It seems as though almost every celebrity has to stand up and give us all a sermon. You said it was ‘using our voice for the voiceless’. But do you think we need Hollywood stars to speak on our behalf?

You live in a different world. A world where Jane Fonda can tweet, “At Oscars wearing Pomellato jewelry because it only uses responsible, ethically harvested gold and sustainable diamonds. #Oscars” – as though that somehow is something to be commended by the common people.

Or Natalie Portman can wear a black Dior cape with gold embellishment embroidered with the names of women who were not honoured in the Oscars and think that this somehow makes a statement on behalf of poor, oppressed women everywhere. Even you were not averse to boasting that you wore the same Stella McCartney Tuxedo to all the honours ceremonies.

It is a special kind of hubris that Hollywood stars have – that you think all of this is having a voice for the voiceless. I have bad news for you – the more you pontificate on our behalf, the less we listen. The Oscars viewers were at an all time low at 23.6 million. What used to be a major TV event is now generally seen as a love-in for the luvvies. Why not just leave it at that, and stop the charade of thinking that your film star status entitles you to speak for all of us?

It seems to me that this politicization of Hollywood is not so much about politics (although the rich progressives do tend to think that the plebes are so beguiled by celebrity that we will buy into any fashionable tosh that you spout), as it is about the self – ‘your’ self. Every word, every tearful look, every artificial smile is about ‘me, me, me’. It’s all about your lifestyle, your values, your virtue – you even manage to suggest not only that you speak for the oppressed, but that you are the oppressed. And I suspect that some of you even believe that. There is nothing so blinding as narcissism.

Who did you want to speak for? You told us and your list of the voiceless was unsurprisingly Woke. “Gender inequality, racism, queer rights, animal rights – equality…”. You spoke humbly about how you did not consider yourself to be any better than any of the other nominees. But you were. That’s the point of the Oscars. That’s why you won and that’s why there were not five Oscars for best actor.

Your commitment to ‘equality’ does not appear to extend to those who cannot afford tuxedos or flights around the world. You were not asking for equal pay for all the actors in your films – I assume that you think that you as the star are worth the millions more than the others get paid? It’s a strange notion of equality.

Speaking of strange, your sermon went way over the line with this beauty. “We feel entitled to artificially inseminate a cow and when she gives birth, we steal her baby, even though her cries of anguish are unmistakable. And then we take her milk that’s intended for her calf and we put it in our coffee and our cereal.” You complained of us being disconnected from the natural world. I agree. Your statement here shows a disconnection from the natural world. And reality.

I grew up on a farm. As a teenager I had a job working as a calfman on a dairy farm. We weaned the young calves at an early age. I have never heard as you put it ‘a cry of anguish’ from the cow. The way of the natural world is the way of eating, drinking, killing, milking, harvesting. The idea that I should feel guilty as milk was used to make my flat white this morning is absurd. None of us think, ‘well, that’s another cow robbed of her milk’ as we have our cereal! Just as we don’t think that’s another plant cut down in the prime of its life!

Speaking for the Voiceless

Incidentally, I have a genuine question for you. You weep at the calf being taken away from the mother. Do you and your fellow celebs weep at the baby girl ripped out of what should be the safest place on earth, her mother’s womb? Is there anyone more voiceless than the child in the womb? Will you speak up for her?

It was breathtaking to hear your fellow celebrities applaud your statement that it was wrong for one species to dominate another with impunity! Do you really think that if they went back to their hotel rooms and discovered a cockroach on their pillow, they would automatically think ‘that cockroach has as much right to be there as me – one species should not dominate another’!

You told Vanity Fair that you became a vegan aged three when you witnessed fishing off the Venezuelan coast. Most of us have had similar experiences as children, but we usually mature and grow up. Please don’t get me wrong, I’m not defending cruelty to animals. After all, I am a Christian who believes that God created us all. But I also believe that we have a responsibility to nurture, care for and steward creation – and we have a right to use it for our own benefit.

I am for animal rights – just not the kind of animal rights that both diminish humanity and lose touch with reality. Like for example the organization Peta – who made you their person of the year last year. A week ago, they announced that we should not use the term ‘pet’ for our pets, because it was demeaning and implied ownership. Apart from the fact that Peta should also amend its name to avoid giving offence to the animals, this is the kind of nuttiness that gives animal rights activists a bad name. I also think that even though it is well intentioned, treating animals like humans can end up doing harm to the animals.

I appreciated your confession of sin in your sermon. You admitted that you had been cruel, but you spared us the details. I also appreciated your attempt at providing us with a means of salvation. You said we need to move beyond an egocentric world view (although it is difficult to think of any group of people in the world who are better than Hollywood at putting their egos at the centre!).

You said we should use ‘love and compassion’ as our guiding principles of change. The trouble is that you spoke as though it were self evidently obvious what these were. Did you not stop to think for a moment that you were receiving an Oscar for playing the role of a Joker whose very raison d’etre was the exact opposite of love and compassion? Of course you could argue it was just a role in a film and films don’t reflect reality, but to me your speech seemed like just another act that did not reflect reality.

None more so than when you told us that we can ‘educate and guide each other to redemption’. Who is the ‘we’ here? Hollywood? The same Hollywood that is apparently filled with sexism and racism? The Hollywood that lauded Harvey Weinstein and stood to applaud the rapist Roman Polanski? We can do without your education and guidance. Perhaps you meant humanity? How has that been working out? The question is not whether we can save ourselves but who is going to save us from ourselves?

You cited a line from a song ‘run to the rescue and peace will follow’. I agree. But the rescue is redemption. And it is not provided by ourselves. Hollywood mocks and decries this, but humanity does need a Saviour and God has provided one. He is called Jesus because he saves his people from their sins. He is the Prince of Peace. There is no peace without him. No matter how many cows you rescue from having their milk stolen.

The reality of Christ – through Cash

Let’s come back to where we came in. Johnny Cash. There is a video he made with a bunch of celebrities which you should listen to. God’s Gonna Cut You Down.

If I had my way, I would have put Ricky Gervais in charge of the Oscars and had this song as the theme tune. That would have dealt with the hubris and the hypocrisy.

Anyway thanks for the sermon. It was revealing but ultimately hopeless. Perhaps you should listen to the Word of God and you would get better material for your next award?! I leave you with another song from Nine Inch Nails, Hurt which was superbly covered by Cash.

The cure for the hurt deep within us is not the ’empire of dirt’ reflected in Hollywood’s glitter, but the one who wore a crown of thorns rather than a gold encrusted cape. May you (and all of us) be healed!