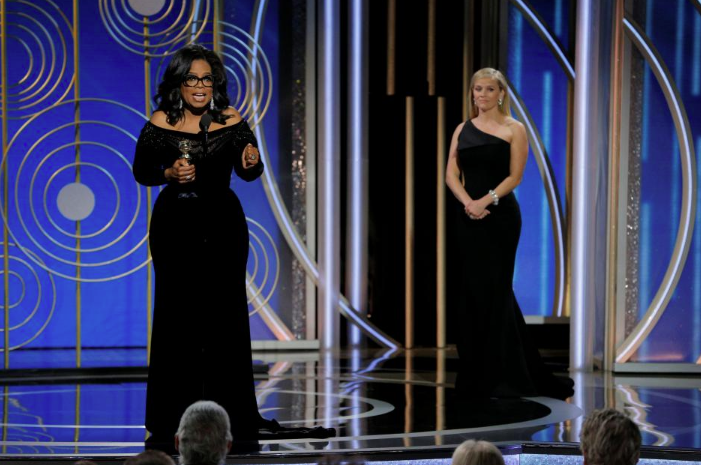 It was a brilliant sermon. Passionate, clear, articulate, historical, personal, short and with strong application. Oprah was on fine form at the Golden Globes this week. And her speech has rightly been getting a lot of traction and praise. It was a superb performance, but more than that, I think she meant it. And there was a lot of good stuff that many of us would say ‘amen’ to. Freedom of the press and the freedom of women not to be abused or treated like second-class citizens resonated. I loved the story of Recy Taylor who died just a week before the Golden Globes – Recy was kidnapped, raped and assaulted after leaving church in 1944 and became an inspiration for Rosa Parks.

It is essential that the Church takes seriously the biblical teaching that men and women are equally made in the image of God. It is just as essential that we recognise and deal with those who use religion as a cover for abuse. To deny it happens would be foolish; to cover it up is wicked – a sin both against woman and God.

There were however aspects of this short speech which were more mixed. I would love to sit and chat about them with Oprah – but given that is unlikely to happen, let’s think about them here.

‘What I know for sure is that speaking your truth is the most powerful tool we all have.’ It’s nice soundbite for the TV news, but it’s nonsense. My truth could be wrong, harmful and false. So could yours. We need to seek truth, but all of us need the humility that ‘our’ truth is at best partial and at worst a lie.

Oprah seemed to contradict herself when she said about the press: ‘It’s the insatiable dedication to uncovering the absolute truth that keeps us from turning a blind eye to corruption and to injustice.’ It was a somewhat rosy view of the press – are they really dedicated to uncovering the absolute truth? Most media I know seem to have as much an agenda as any individual, and are often as guilty of cover-ups and false news as any one else. But it’s the concept of absolute truth that intrigued me – it just doesn’t work when you place it alongside the idea that ‘this is my truth, tell me yours, all are equally valid’.

And then there was the hypocrisy. At last years Golden Globes Meryl Streep gave a speech that was very similar to Oprah’s. She lauded the media, attacked Trump and praised Hollywood. And the stars all loved it and gave her a standing ovation. Some of those who stood and applauded with such enthusiasm have ended the year disgraced and outed by the Weinstein affair and its subsequent offshoots. I have little doubt that some of those who stood teary-eyed applauding Oprah’s fine sentiments will themselves be guilty of what she was condemning. And they seem to have forgotten that the problem they were talking about was a problem Hollywood created. To cite one example among several, many of these same stars applauded and defended Roman Polanski, a producer they knew had been found guilty of child rape. A Hollywood that thrives on violence and sex cannot shout too loudly when its chickens come home to roost.

But even more than that it’s the hubris that gets me. Oprah declared that ‘their time is up’. The ‘they’ being the powerful men who abuse. I wish it were true. It’s all very well for the rich and powerful to sit and applaud as one of their own attacks the rich and powerful. But does it really change anything?

Oprah promised the young girls watching: ‘So I want all the girls watching here, now, to know that a new day is on the horizon!’ It’s perhaps a bit early to say that. Oprah diagnosed the problem but her solution was Disneyesque. Fine speeches, black dresses and MeToo hashtags are all good and well, but they won’t change human society because they can’t change human nature. In fact they could end up exacerbating the problem because they can result in triumphalism, virtue signalling and unrealistic assessments of the situation. Maybe instead of shutting the stable door after the horse has bolted, we could look to stopping it bolting in the first place. Is Hollywood really prepared to ask the deep questions about human nature, evil and redemption?

But let’s not leave it there. Oprah spoke of those who really struggled: ‘The one quality all of them seem to share is an ability to maintain hope for a brighter morning, even during our darkest nights.’

Hope for a brighter morning. I love that. What hope is there? As Christians we have the greatest hope of all: ‘In Christ alone my hope is found, he is my life, my strength, my song’.

Maybe this year more Hollywood stars will be able to point to that.

After writing this I came across this superb article from Melanie Phillips in The Times….if you are not able to access it by the link let me know and I will put the whole text up…its well worth reading…

Never mind the movies: the theatricality and demand for applause at the Golden Globe awards in Los Angeles at the weekend took place on the red carpet. Actors wore black outfits to signal their solidarity with victims of the sexual harassment scandals that have consumed Hollywood.

It’s hard to recall a more egregious display of vanity signalling than the black dress protest. It was “please snap me while I pose in my conscience”. MeToo! MeToo!

Shortly before the awards there was a crisis. Forget Iran, Syria or North Korea. So many Hollywood consciences needed to be on display that designers and stylists were reported to be running out of black attire and having to rush in more from their fashion bases in New York.

One stylist who dresses Mariah Carey told The Hollywood Reporter: “We are all fighting for the same black dresses.” MeToo! MeToo!

Oprah Winfrey’s hair stylist said the pressure was “incredibly stressful”. Another said stylists would be having sleepless nights over how to showcase their clients in black garments. “It has to be creative. How can I stand out?”

How indeed. You’ll be relieved to know that Angelina Jolie was in feather-trimmed black tulle, Laura Dern was in black Armani and Gal Gadot wore a tuxedo-inspired Tom Ford gown.

Whatever happened to the idea that women shouldn’t be defined by what they wear? According to Eva Longoria, wearing black was “a moment of solidarity, not a fashion statement . . . This time the industry can’t expect us to go up and twirl around.” Oh but they did, Eva, they did; this time, though, it was a meaningful twirl.

It didn’t stop, though, at mere attire. Many female actors brought a female activist as a date and chose to be photographed arm-in-arm with other women.

This was solidarity not just against men outed as sex-pests but against all men. Receiving a lifetime achievement award, Oprah Winfrey spoke about “a culture broken by brutally powerful men” whose “time is up”. Now Oprah is being touted as the Democratic presidential candidate for 2020. SheToo!

Among all the exaggerated outrage, however, there have been victims of real, horrific, sexual violence. Yet many of those blustering in black at the Globes knew about this behaviour but kept quiet about it in order not to jeopardise their careers.

When Roman Polanski won the Oscar for best director in 2003, he wasn’t present at the ceremony. He had fled to France after being charged in 1977 with rape, sodomy and other offences against a
13-year-old girl, and had pleaded guilty to engaging in unlawful sexual intercourse with a minor.

When his award was announced, however, Meryl Streep, among others, leapt to her feet to give him a standing ovation. No matter: there she was at the Globes displaying her principles and courage by wearing a long black gown instead.

Where is this outrage going to draw a line? The Academy of Motion Picture Arts and Sciences is in disarray over the fact that, having expelled Harvey Weinstein for his sexual aggression, they face similarly having to ban dozens of A-listers — Kevin Spacey, Dustin Hoffman, Ben Affleck and many more — who have been outed (with some denials) in the Great Casting-Couch Terror.

The director Woody Allen has been accused by his adopted daughter Dylan of molesting her. David Krumholtz, who co-starred in Allen’s recent film Wonder Wheel, tweeted a few days ago that he deeply regretted doing so as it was “one of my most heart-breaking mistakes. We can no longer let these men represent us in entertainment, politics, or any other realm. They are beneath real men.”

When feminists objected that it was a bit late now to have second thoughts, Krumholtz said he had donated his Wonder Wheel salary to the protesters “without a tweet”. Which he nevertheless told us.

Laura Dern used her acceptance speech for her best supporting actress award to urge: “May we teach our children that speaking out without the fear of retribution is our culture’s new north star.”

Yet the causes regularly promoted by such luvvies — climate change, Black Lives Matter, anti-colonialism, anti-Islamophobia, LGBT issues — are being advanced by condign retribution, such as character assassination or social and professional ostracism, against any who dares speak against them.

Moreover, Hollywood’s finest don’t don black outfits to protest against men in the developing world who not only abuse but slaughter women, men and children.

Millions of women around the world really do suffer in cultures where male violence towards women is a given; but on those victims, these Hollywood hypocrites are silent.

In cultures they choose to present as victims of western colonialism, they simply ignore the all-too real oppression of women. They profess “solidarity” with oppressed women; but of course, it’s really all about themselves.