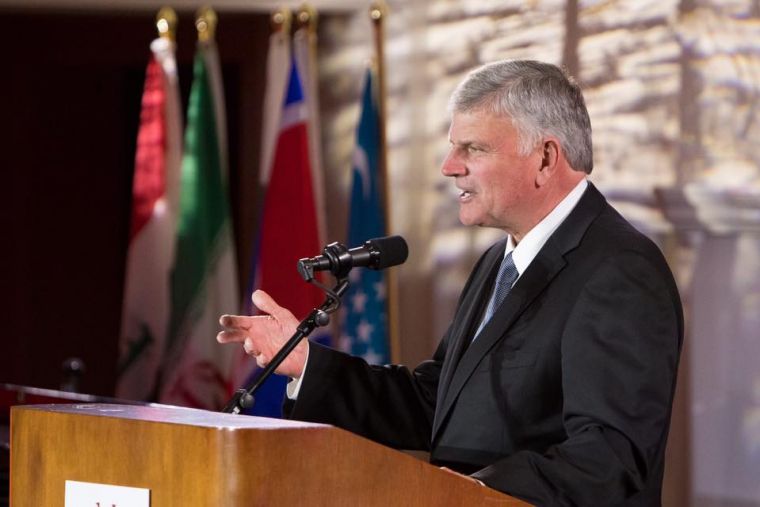 This week, something of great significance has happened in the UK. Something that has implications far beyond its shores and that will affect the Church and Western democracy for years to come. Future historians will look back and see this incident as an indication of the decline of Western democracy and it’s replacement with an authoritarian ideology far removed from the liberal democracy birthed from Christianity.

We are not talking about the day that the UK finally left the EU – important though that is. No, this week an incident happened that at first sight seems trivial. Franklin Graham was first of all banned from the Liverpool ACC, then Sheffield and most chillingly of all, from the Glasgow SEC.

A seminal moment is when a new idea or concept is sowed and results in the growth of that concept in the future.

So why is the Graham ban a seminal moment?

It’s not a question of whether the Church should invite him or engage in this kind of stadium outreach. That is an in-house debate for the Church.

It’s not because the mob has got its victim. This is not the first time this happened and it won’t be the last. Twitter rage, online petitions and social media campaigns are effective weapons to have in such a dumbed down, irrational and unforgiving society.

It’s not because of the usual contradictory statements made by the various bodies refusing the Billy Graham Evangelistic Association. The formula is always the same – it’s against their values, not wanting division and representing all our society (except of course those who hold to the Christian, Islamic and Jewish view of marriage). The mantra of banning those you don’t agree with in the name of tolerance and diversity is now accepted as self-evidently reasonable by those who have given up on real tolerance and diversity – and logic.

It’s not because of the compliant clergy. Again, this is nothing new. The Bishop of Sheffield, Pete Wilcox, said in November: “Mr Graham’s rhetoric is repeatedly and unnecessarily inflammatory and in my opinion represents a risk to the social cohesion of our city.”

The Rev Bryan Kerr, a Church of Scotland minister in Lanark, said Graham’s views “do not sit comfortably with many Christians in Scotland”.

He said: “These views, and many more like them, are not shared by all Christians as Mr Graham would have people believe. Franklin Graham isn’t the voice of Christianity.”

Even more astonishingly, he then went on to organise a petition seeking to get Graham banned.

Tozer’s comment is as relevant now as it was when he made it 65 years ago:

“The church goes along with everything and stands against nothing – until she is convinced that it is the safe and popular thing to do; then she passes her courageous resolutions and issues her world-shaking manifestos – all in accord with the world’s newest venture – whatever it may be.”

Preaching the Gospel is Illegal?

All of the above has been all too common in the UK today – and in other Western countries and churches. The big difference this time – and one that has almost slipped by unnoticed – is the reason given by Glasgow City Council for it’s demand that Graham not be permitted to speak at the SEC (the Council is the major ‘stakeholder’).

Susan Aitken, the SNP Council leader stated that the Mission should not go ahead because it could be breaking the law. She stated that permitting Franklin Graham to speak at the SEC could “fundamentally breach the council’s statutory equalities duties.”

Some more equal than others

Let’s unpack the code language being used here. When Ms Aitken speaks about ‘equality’, she does not mean economic or financial equality. Last year, she defended Glasgow’s Lord Provost who had spent over £8,000 in two years on personal expenses for her civic duties – including 23 pairs of shoes. There are children in Glasgow who can’t afford shoes. No equality there.

Nor is she speaking about religious equality. One of the charges against Franklin Graham is that he has criticised Islam. Yet there are stand up comedians in Glasgow whose acts have a significant percentage of anti-Christian mockery. No equality there.

No, the issue here is that of the equality demanded by identitarian politics, those who claim victim status the most.

When same-sex marriage was being debated several years ago, we warned that a time would come when it would be illegal to be opposed to it. The resultant ridicule and abuse was equal in its vehemence. Now Ms Aitken is saying that because of ‘equality’ someone who holds a view, which is (for the moment) still legal, they can be banned on the basis that it would be breaking the law to have him speak. Given that the Catholic church, the Church of England and most evangelical churches hold the view that sex outside marriage is wrong (and marriage is between a man and a woman), does this mean that the churches are against the law?

This is a new and sinister development. Law is now being made on the basis of which ‘victim’ group can claim priority. Would Glasgow City Council permit a billboard which stated “Woman = Adult Biological Female”? I doubt it – trans ‘rights’ trumps women’s rights. I doubt that our progressive politicians could even tell us what a woman is!

That is why all of this is so important. Many of our civic institutions have been taken over by an ideology which is fundamentally anti-democratic, anti-factual and intolerant – in the name of tolerance. The State, having replaced God, has become the source of all morality and values. If you don’t agree with those values you are not one of ‘the people’. You are untermenschen. You are out.

And don’t take false comfort that this is a one off. Once the mob gets a scent of blood, they always want more. So I’ve just read in The Times that Larry Stockstill, a Louisiana evangelist, has been banned from speaking at the Usher hall in Edinburgh this June.

Why? Because he described same-sex relationships as “deeply grievous” and abortion as “demonic”. He was coming to speak at an event arranged by Destiny Church (which The Times calls a ‘sect’). It’s interesting to note that the event was only cancelled after “complaints were received”. It seems a somewhat different standard to when some Christians complained about Jerry Springer!

It’s not just controversial American preachers who will get banned; it’s lesser mortals too. The Times in their report about the Edinburgh ban also stated “Gavin Calver, the chief executive of the UK Evangelical Alliance, was also due to speak. He refused to preach at a same-sex wedding.”

So now, if you refuse to preach at a same-sex wedding, you cannot use State premises? The implications of this are profound. If you are a church that actually believes the Bible and follows Jesus, the progressive mob will ensure that you are hounded out of any public premises. And it won’t end there. The Test Acts are back.  If you don’t hold to the State doctrine, you will not be allowed to hold public office.

Charities will lose their charitable status if they do not sign up to the discriminatory ‘equalities duties’. If you insist that your children should be taught biological reality rather than Queer theory fantasies, you could be charged with child neglect. Already governments in the UK are proposing that all children must be ‘educated’ into the current sexual philosophy with no opt outs permitted. Parents will be compelled to hand their children over for ‘re-education’ in the ‘right’ values. Christians will be barred from certain jobs. Will a day come when all preachers will need to be State certified? Will our sermons have to be approved to make sure they match ‘equalities’ criteria?

You say this is fanciful. If I had told you a few years ago that Billy Graham’s son would be banned from preaching at the Glasgow SEC because it could be breaking the law, you would have said the same thing. And yet here we are. It is a seminal moment.

What will the Church do?

What will the Church do to reverse the tide – and to stand up – not just for our own freedoms but also for all who are threatened by this new despotism?

I often hear clergy talking about being a voice for the voiceless. Those who have privileged positions within the State Establishment can now decide to speak up – or they can continue to play the game and protect their own status. Now is the time to see if they really are for the marginalised.

It’s not particularly the Church I worry about – we usually thrive under discrimination and persecution. It’s those who do not have the presence and comfort of Christ, or the community of his people that concern me. It’s those who do not have power, influence, money and woke status that will be left to the social engineering and the sneering mockery.

PS.  As some readers of this blog will know I was critical of Destiny bringing Creflo Dollar – I have been accused of inconsistency and changing my stance.  To say that is to fall into the same dictatorial trap as the Progressives.  I don’t think it was wise to bring Creflo to Scotland – (to a lesser degree I don’t think it is helpful to bring Franklin) – but I support the right of Destiny to bring him (as I support my right to question it).  Destiny is a Christian church who I wish to see prosper in the Lord….but even if they were a cult or another religion I would support their right to free speech.  That’s what we should be fighting for.  The truth will always prevail against false ideas.  Why are the Progressives so afraid?  Because they know that in a free market place of ideas – where they don’t indoctrinate everyone or use the law to ban those who don’t accept their ‘values’- they have no case.   Reason, truth and facts are not their weapons.  Fear, emotion and prejudice are…..