The period between Christmas and New Year is often one of reflection as we look back upon the year that has been and forward to the one that will be.  Sinclair Ferguson’s latest book, In the Year of Our Lord, does more than that.  It looks over 20 centuries of the Church’s history.  As the preface says:

“Nothing can prevail against Christ’s church.  The story of the church is important for Christians to know, for it contains rich and uplifting stories of God’s dealing with His people.  In this book, Dr. Ferguson takes the reader on a tour of Christian history, featuring stories and songs to give believers a sense of their place in God’s kingdom and to encourage them in their walk. “ 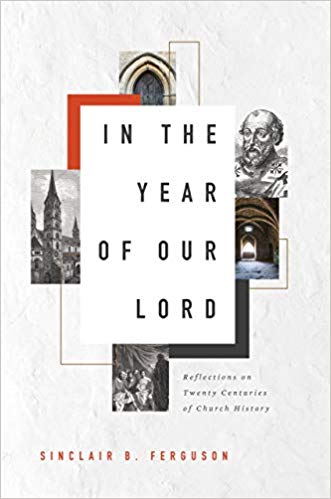 For some I suspect this will sound incredibly dull – especially if you think you don’t like history.  But, believe me, this book is a wee gem – for all believers.  I found it so inspiring, encouraging and moving that I stopped reading it for my general reading and instead used it as a devotional each morning.   The 20 chapters (one per century) left me longing for more – not just in the sense of more of the book – but more of the Lord’s work in this world – as he patiently builds his Church and causes his Kingdom to come.

This would be a great book to use your Christmas book tokens on!  Immediately I finished I went and bought a copy for my dad – and I can think of others for whom this is a perfect gift.

To give you a wee flavour – here is a summary of the 7th century – Gregory and Muhammad.

Sinclair begins the chapter with a lengthy quote from a letter form Pope Boniface VIII to Queen Ethelberga, the daughter of the first Christian King of Kent.  He then goes on to discuss the history and influence Pope Gregory (the Great) – Pope from 590 to 604.  It was at this point in history that the Church became politically strong, but lost its grip on the gospel.  Into that world came the second figure Sinclair considers – Muhammad.  The summary of his life and the growth of Islam in the 8th century is fascinating. Sinclair reflects on the danger of the modern Western dogma that since we cannot have certain knowledge of God (if he exists at all) then l we are left with is that all religions are descriptions of religious experience.  Islam and Christianity are thsu two different forms of the same basic religion.

But this betrays a naivete and ignorance which does a great deal of harm.   The question is not whether all roads lead to God, but ‘on what basis can we stand in His presence when we get there?’.

“Islam is a way of submission and good works.  There is no goods news there.  By contrast, the gospel is a message of God’s grace, of faith and hope and love – a message about God seeking and finding us.  Nor should we lose sight of the stubborn fact that until the days of Constantine, the remarkable spread of Christianity took place exclusively by the preaching of the gospel and never by military activity.  We are dealing here not with two variants but two antithetical views of God” (p.78).

The chapter is finished with the hymn of Germanus, Patriarch of Constantinople 9634-734) – A Great and Mighty Wonder.  This is the last verse:

And idol forms shall perish,

And error shall decay,

And Christ shall wield His sceptre,

Our Lord and God for aye.

To God on high be glory

And peace on earth to men

The Visible Word and the Aaronic Blessing – Sinclair Ferguson