Maya Forstater was a charity worker as a tax expert at the Centre for Global Development. She lost her job after she was accused of publishing ‘offensive’ tweets questioning the government’s proposals regarding the Gender Recognition Act, which would allow people to self-identify as the opposite sex.

She took the issue to court and she has just lost her case. In an astonishing judgement, which seems as though it was written by Monty Python, the judge wrote:

“I do not accept the Claimant’s contention that the Gender Recognition Act produces a mere legal fiction.”Rather, her view that humans cannot change sex is “not worthy of respect in a democratic society.”

The facts are quite straightforward. A biological male cannot become a biological woman. XY chromosomes don’t become XX chromosomes. It is in fact as much a legal fiction to say that a man can become a woman, as much as it is a legal fiction to say that a human being can become a giraffe or that the earth is flat! But now a judge tells us that to believe that men cannot become women is “not worthy of respect in a democratic society”. There is, of course, no democracy involved in this.

But the judge is not finished: “Even paying due regard to the qualified right to freedom of expression, people cannot expect to be protected if their core belief involves violating others’ dignity and creating an intimidating, hostile, degrading, humiliating, or offensive environment for them.”

By that criteria Richard Dawkins, the Humanist Society and many stand up comedians should be banned because they violate the dignity of many Christians and create an intimidating, hostile, humiliating and offensive environment for them. Recently I was in a meeting of lawyers at which the speaker mocked Christianity and presented his case in such a way that it was intimidating and offensive. Should I have sued? Would our judge have said they should be sacked? Or is it only trans activists that are afforded that protection? It seems that only the rich and powerful get to determine what real offence is. 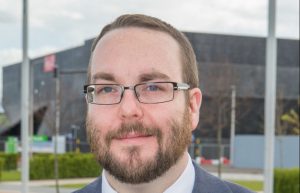 I have a personal interest in this case. One of the key protagonists, Gregor Murray, once threatened to sue me for misgendering ‘they’. Mr Murray says ‘ze’ is not a man or a woman – and gets upset if you use the wrong pronouns. I said I was quite happy to use whatever pronoun ‘zem’ wanted as long as ‘hir’ used my pronoun of identification. I pointed out that my primary identity was as a Christian and I liked to be identified as ‘beloved in Christ’, so as long as ‘xir’ wanted to address me then they should use ‘beloved in Christ’ – although I would on occasion accept ‘beloved’.

Councillor Murray seemed reluctant to grant me my identity and instead attacked me with a series of abusive messages including a suggestion that I needed to go on Grindr. Although abusing and mocking Christians was not enough to get ‘zem’ the sack, when they took on the feminists it was too much even for the SNP. Councillor Murray was compelled to resign after a series of abusive tweets against what ‘ze’ called TERFs.

There is no mention in their policy of ‘girls’, ‘women’ or ‘females’. Women have been reduced to ‘menstruators’. This is progress?

Whilst all of this may be mildly annoying/amusing, it has serious consequences. Gregor Murray was in charge of the education of all Dundee’s children and, as such, sought to ensure that they were indoctrinated into the same confused ideology which was destroying their life, grasp of logic and the English language. As a result, Dundee City Council, for example, adopted a policy of giving free sanitary products for ‘all who menstruate’. There is no mention in their policy of ‘girls’, ‘women’ or ‘females’. Women have been reduced to ‘menstruators’. This is progress?

Maya Forstater stated in court: “In reality Murray is a man. It is Murray’s right to believe that Murray is not a man, but Murray cannot compel others to believe this….while I may choose to use alternative pronouns as a courtesy no one has the right to compel someone to make statements they do not believe.”

It was this statement that the learned judge decided was not “worthy of respect in a democratic society”. Her – and Jordan Peterson’s, incidentally – brave stance against compelled speech was not to be permitted in the UK.

Others like Amnesty International and Stonewall joined in the pile on.

The reason for JK Rowling being mentioned? Because she had tweeted to her 14 million followers:

“Dress however you please. Call yourself whatever you like. Sleep with any consenting adult who’ll have you. Live your best life in peace and security. But force women out of their jobs for stating that sex is real?”

Cue threats of book burning. How ironic that when some Christians suggested that Rowling was promoting witchcraft, oh how the progressives laughed – but now it is they who are accusing her of blasphemy and want to destroy her.

Another very brave woman, seeking to defend womanhood, is professor Kathleen Stock, professor of philosophy at the University of Sussex. She made this strong call:

” Women are losing not just their legal and social protections, but we are approaching a situation where women (and men) cannot even legally speak about this loss. I therefore call upon the British Philosophical Association, all learned Philosophical societies in the UK, and all British academic philosophers working in UK departments, to stand up and say out loud — or better, write it down where members of the public can read it: people should be legally permitted to believe that biological sex is immutable and cannot be changed, without fear of losing their jobs. You are philosophers. This is your moment. If not now, then when?

Where does the Church stand with this call? I for one am fully behind it. I do not want the judiciary to impose upon us their bourgeoisie morality based on nothing more than their personal feelings, Queer theory, and the woke cries of the powerful.

If this ruling is to remain in place, then we no longer live in a free society. If there is no place in a democratic society for those who believe that sex cannot be changed, then there is no place for me. And that society can no longer call itself democratic. It has become an authoritarian society run by a confused and immoral elite.

I believe that men cannot become women and that women have the right to their own spaces, sports and societies – without biological men removing them.

What will the Church of England do? The Church of Scotland? The ‘progressive’ evangelicals like Steve Chalke?

As a biblical Christian who believes that male and female do have something to do with biological sex, I am genuinely concerned about the threat to women’s rights. If the woke ‘progressives’ win, it will be the end of reason and the end of freedom in the contemporary West. We will regress to the pre-Christian Greco/Roman/Pagan view of women as sex objects and lesser mortals who need to be kept in their place and dominated by men. I stand with my feminist sisters. Je suis Maya!