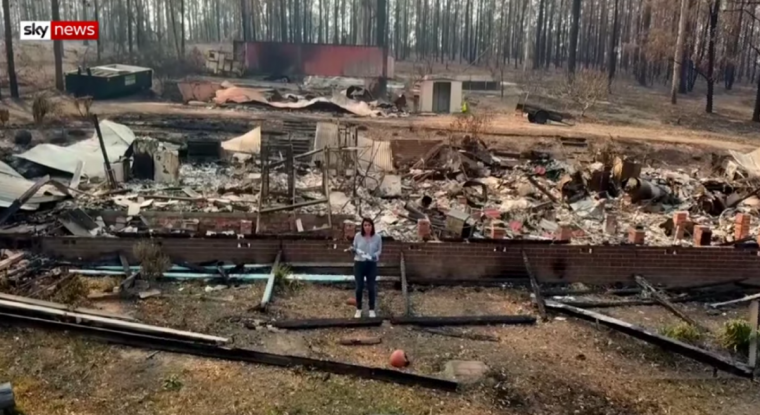 Here is the Christian Today one.

Walking out of Brisbane airport last Monday it seemed to be unusually misty. Then the smell hit me. This wasn’t mist, it was smoke – smoke from several bushfires miles away from the city centre.

Much of Queensland, like New South Wales was on ‘catastrophic’ fire alert. What this means is that there is a real danger to life and property through bushfires that can start up and spread incredibly quickly. For those of us who think of fire as slow moving, it takes time to readjust and realize that when the fire service say it’s too late to leave, you just have to find shelter, then it’s time to do so.

I once had the wonderful job of bringing in straw in farmers fields.  One thing we had to be aware of was the speed with which the flames jumped from row to row, especially in windy conditions. It could be deadly.

So far more than 250 homes have been destroyed and four people killed. I now have an app on my phone which tells me about the bushfires, and immediately another one flares up. At the time of writing, there are 81 in NSW and 52 in Queensland. A red exclamation mark means that the fire is out of control, a blue symbol that it is ‘being controlled’.

Last Tuesday I stood on our apartment balcony and watched the smoke rising over the city from fires within 6km. My daughter and family had to evacuate from the Blue Mountains and come to stay with us, leaving their home and most of their possessions behind. Another friend wrote of several hundred acres of their land being destroyed and many cattle killed. Thankfully my family were able to return, but the reality of the situation hit home. This was not something happening on a TV screen; this is real life.

In the simplistic world in which we live, every incident is reduced to the simple solutions which confirm the bias of those who are making them. And these bushfires are no exception.

Are these bushfires the result of climate change? Is Scott Morrison directly responsible because his government allegedly does not take climate change seriously? Australia produces about 1.3% of the world’s emissions (compared with China at 30%). Reducing that even by 50% would make little difference. Besides which there are other factors.

ABC news explains that these factors include the wind, a long dry period (there was one day this week when for the first time in recorded history there was no rainfall anywhere over this vast continent), El Nino as well as climate change.

It’s not just weather patterns. Human error has not helped the situation. Ironically one of the groups being blamed are the Greens who have objected to preemptive burning. This normally occurs during the winter months when ground is deliberately burned so that the loose brush is not available as fuel for the bushfire season. But the Greens objected and residents of urban Sydney did not like the smoke coming over their houses, so this year a lot of the bush was left. Combined with the dryness and the wind, its created perfect conditions for a firestorm.

The Aboriginal people had a much better understanding that Australia is a continent made to burn. I read of one farmer who used to deliberately burn one seventh of his land every year.  The ash helped fertilise the soil and when bad conditions came, there was limited fuel for fires to spread.

Another factor is human evil. The fire nearest my home was one of several deliberately started by an arsonist. What kind of perverse evil exists in human beings that for a thrill they are prepared to risk the death and destruction of others?!

Is this the judgement of God? One correspondent suggested that these fires are not a coincidence. Within a month of NSW passing a law making abortion legal, the judgement of God has hit the nation. It’s easy to mock this view and it is somewhat limited and simplistic, but just as we should not dismiss the extremist Green view that this is Mother Earth getting her revenge, so we should not dismiss the judgement of God as a factor. What if God just simply says to us ‘have it your way, you want to control and use my creation without me? Go ahead and see what happens?”

Humans have to learn to adapt to conditions. Money needs to be spent on firefighters.  There is a legitimate criticism of the Morrison government because of a reduction in funding. We need to be careful where we build houses, how we use water and how we use the land. And while Australia reducing its greenhouse gases will not stop bushfires, as a part of a collective human effort it can help to make a difference.

Our atheist friends may mock and question the efficacy of prayer, but nonetheless we can pray.

Some biblical lessons about fire

Fire does many things. In Australia it is necessary for the bush to be renewed. For some plants and trees the fire breaks upon the seedpods, and the ash nurtures the new seeds so that the old is replaced with the new. This is a reminder of the great promise in 2 Peter 3 that the heavens and earth will be destroyed by fire, but ultimately renewed out of God’s grace. Out of the ashes comes new life. Let it be.