It’s strange and a wee bit amusing how many people back home think that we have come to paradise!  Australia IS a beautiful country but like everywhere else it has its problems too – right now the key one in NSW are the bush fires.   Over the weekend there were 17 serious major bush fires- this is the highest number that there have been at this time of year.  At least three people have been killed and 150 homes destroyed.  And its not over yet. 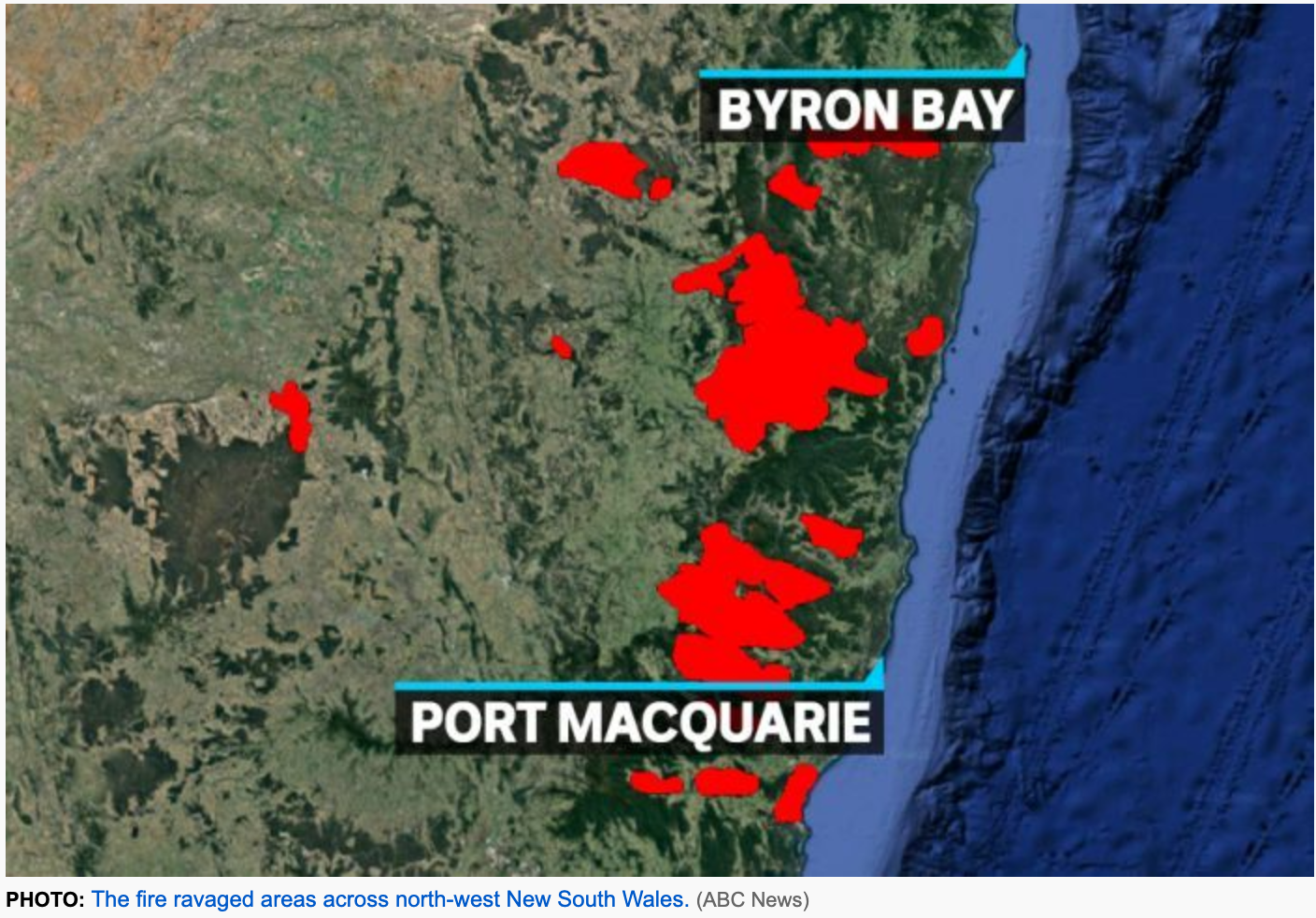 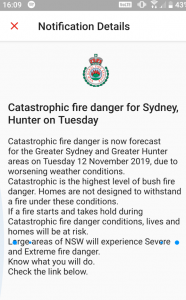 For the first time the greater Sydney area has been issued with a ‘catastrophic’ fire warning for this coming Tuesday where temperatures are expected to go into the mid 30’s and be accompanied by a driving wind.  This combined with the lack of rain makes it ideal conditions for fires to start and spread.   It’s highly unlikely that the area we live in will be affected but my daughter received this warning about her area – where there is a real risk their mountain will go on fire.

This video gives you some idea of what they are facing:

Whilst in Sydney so far we have only experienced some of the haze caused by the smoke – in other areas the signs are more ominous.  In Macquarrie not far up the coast – the sky has turned red.  It is a really eerie feeling for those who are living there. 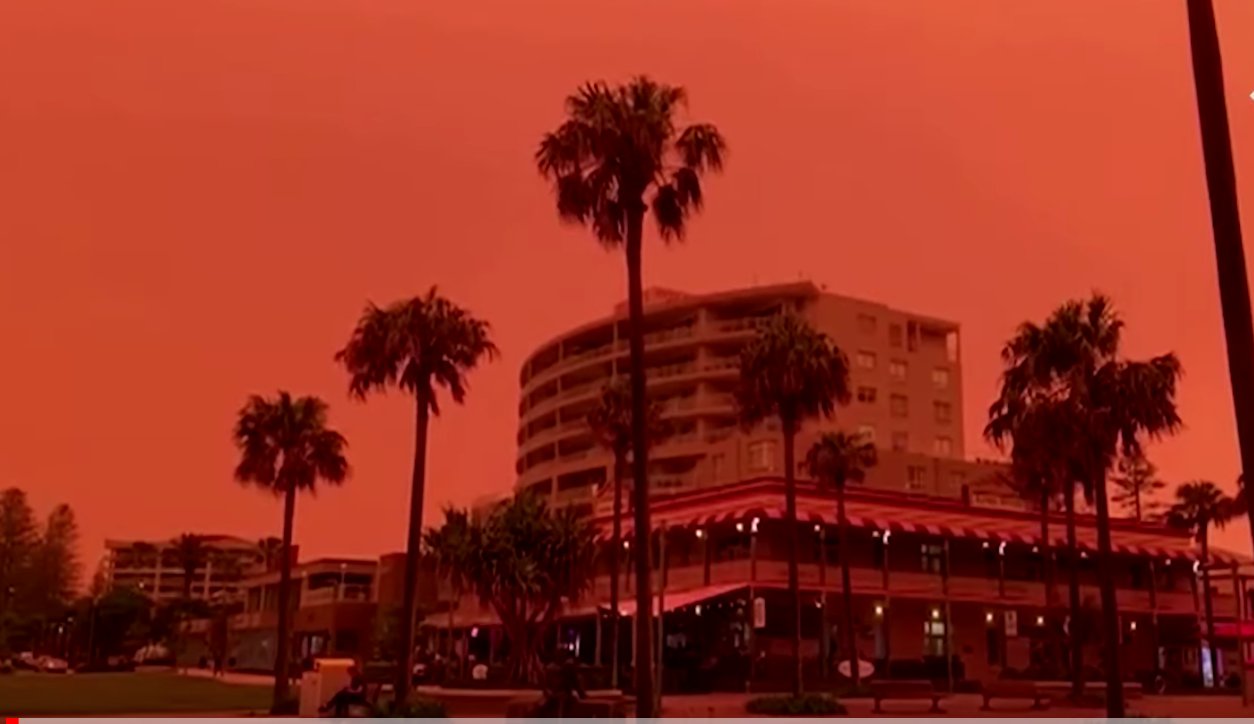 Why is this happening?  Some are blaming it on Climate change – and that is highly likely to be a factor.  The drought and the warmer temperatures certainly are.  But there are other more immediate human factors.  Bushfires have always been a part of Australian life – its a continent that to some degree seems designed to burn.  But the aboriginal peoples handled it better.  The fires often ended up regenerating.  Fire purifies as well as destroys.   In fact some of the vegetation requires fires -because the heat opens up the seed pods and the ash provides fertile ground for it to grow.

When a serious fire kicks in then the firefighters will often ‘back burn’ – that is create a controlled fire to stop the out of control fire.  But there is another measure that can be taken – what is called damage limitation.  This is where parts of the bush around vulnerable areas are deliberately burned in winter, so that dried fuel is not available for the wildfires in summer.  But this has been cut back because of complaints from residents in the city about the smoke impacting their lives – and so there has been a build up of material with much of the State being turned into a tinderbox.

What can be done?  I don’t know.  But I suspect that this ‘extraordinary’ event will be the new norm.  We can and do pray for rain  but there is also a human responsibility to manage and take care of the environment.  I suspect the government is going to have to take this risk a lot more seriously – and the population will have to get used to making some ‘sacrifices’ in order to combat this danger.

In reflecting upon this in church yesterday it struck me how often fire is mentioned in the bible – both as something that destroys and punishes – but also to purify and make holy.  Who can dwell with everlasting burnings?   I wonder if sometimes the Lord uses the ‘fires’ in our lives as a kind of ‘backburn’ or damage limitation.  He wounds only to heal.  He permits burning in order to regenerate.

When the Lord has washed away the filth of the daughters of Zion and purged the bloodshed of Jerusalem from her midst, by the spirit of judgment and the spirit of burning, Isaiah 4:4

“As for me, I baptize you with water for repentance, but He who is coming after me is mightier than I, and I am not fit to remove His sandals; He will baptize you with the Holy Spirit and fire. “His winnowing fork is in His hand, and He will thoroughly clear His threshing floor; and He will gather His wheat into the barn, but He will burn up the chaff with unquenchable fire.”  Matthew 3:11-12

Natural disasters – flood, plague, fire – are not new.  For the Christian we look to the Lord to deliver and pray for his mercy.   This morning I read this apposite verse in Hosea 13:

5 I cared for you in the wilderness,

in the land of burning heat.

May we all know His care,

See you next week, David 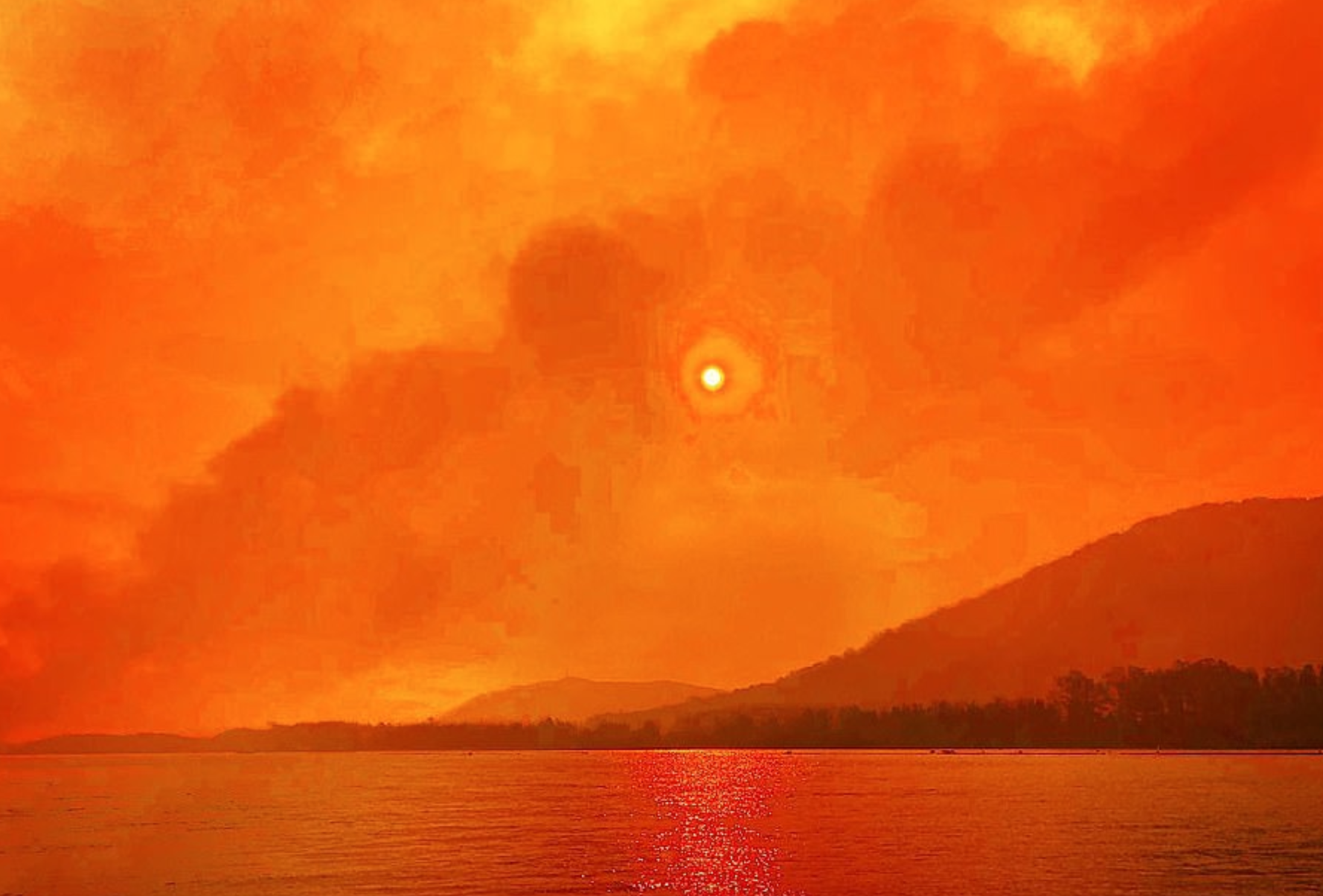