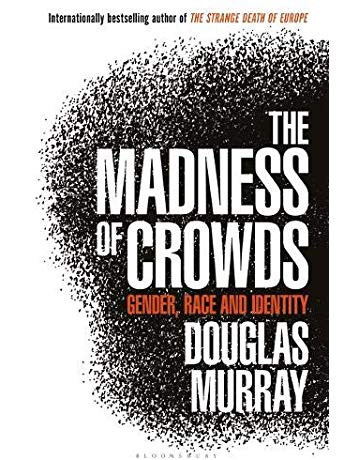 Every now and then a book comes along that feels as though it has a brilliance that is enlightening or even a prophetic significance. These ‘five star’ books are rare enough, but, from a Christian perspective even more astonishing when the author is a gay atheist! Douglas Murray’s latest book, The Madness of Crowds, published by Bloomsbury, is already causing a stir – and rightly so. In fact if there is one book I would urge you to read this year, Murray’s would be the one.

Subtitled Gender, Race and Identity, it does what it says on the tin. Murray has four large chapters entitled ‘Gay’, ‘Women’, ‘Race’ and ‘Trans’. They are separated by three interludes on ‘The Marxist Foundations’, the ‘Impact of Tech’ and ‘Forgiveness’. The writing is excellent, there is much new information and the reasoning is clear and devastating.

Although writing from his own perspective, it is clear that Murray has a lot of time for, and appreciation of, Christianity. In fact there are times when he expresses a biblical understanding better than some popular Christian authors. I wondered why this was the case. Perhaps it is because he is not seeking to compromise in order to be nice to people? Perhaps it is because he sees clearly where our society is going whereas so often as Christians we can have a limited or blurred view.

Murray cites Chesterton: “The special mark of the modern world is not that it is skeptical, but that it is dogmatic without knowing it.”

It is this dogmatism, which is excellent at deconstructing, but hopeless at rebuilding, which Murray exposes and evidences. He also looks at the results that stem from it – in particular, the book’s title, The Madness of Crowds. It’s as though there is a collective insanity gripping the Western world, an insanity that will cause us to destroy ourselves unless we wake up. This book is about as clarion a wake up call as you could wish for.

In case, like the Guardian, you think this is just an angry rant, I would suggest that you read the interlude on forgiveness. It is one of the most beautiful, insightful and moving pieces of writing I have read in years. Murray points out that the collapse of the barrier between public and private language, and the situation that technology has got us into, means that forgiveness has become an even more necessary but rare phenomenon. We have still retained the Christian concepts of guilt and shame, but have lost the means of forgiveness and redemption that Christianity offers. We either offer forgiveness only to those people we like (thus enhancing the increasing tribalism in society) or we bow to the pressures of the mob. We go along with the dogmas of the progressive elites: ‘no questions allowed. No questions asked’.

You will almost certainly not agree with everything Murray writes, but he will challenge, stimulate and cause you to think. As a Christian, this atheist caused me to weep and pray. At a time when so many Christians are compromising with the culture in order to ‘win it’ – and thereby losing both the culture and the church – it is wonderful that the Lord gives us a gay atheist who sees and speaks truth!

There will of course be Christians who read this and it will only add to their sense of despair. Whilst Murray’s analysis is as good as any you will read – his solutions are somewhat limited. That is because the problem is so deep that only Christ can fix it! Even the return of Christendom, as Murray seems to long for, won’t cure the Madness of Crowds, only the sanity of Christ. And that is why we should not despair. We should speak the Light into the Darkness. But in order to do that effectively we need to understand how great the Darkness is (both within and without). Murray will help with that.

In a week when social media is filled with angry political views and Parliament is filled with politicians behaving as though they are on Twitter, I leave you with this helpful insight that Murray gives into the danger of letting politics give you meaning:

“In an era without purpose, and in a universe without clear meaning, this call to politicise everything and then fight for it has an undoubted attraction. It fills life with meaning, of a kind.

“But of all the ways in which people can find meaning in their lives, politics, let alone politics on such a scale – is one of the unhappiest. Politics may be an important part of our lives, but as a source of personal meaning it is disastrous.

“Not just because the ambitions it strives after nearly always go unachieved, but because finding purpose in politics laces politics with a passion – including a rage – that perverts the whole enterprise.

“If two people are in disagreement about something important, they may disagree as amicably as they like if it is just a matter of getting to the truth or the most amenable option. But if one party finds their whole purpose in life to reside in some aspect of that disagreement, then the chances of amicability fade fast and the likelihood of reaching any truth recedes.” (p.255)