Social media is sometimes quite deceptive. The trouble is that the impression given by Facebook posts or Tweets is almost always wrong, because it is incomplete.   Some people’s FB feeds read as though they are living the perfect life in paradise, full of smiling faces, purring cats and holidays in the sun. Some Twitter feeds read as if the Tweeter is in a permanent state of rage, despair and angst.

Douglas Murray in The Madness of Crowds laments the removal of the distinction between public and private. But there are some things that should remain private. There are personal details, or things that could be said which would be harmful, because in not conveying the full picture they give a false picture. This is not to say that we should never say anything (because after all we never know the full picture about anything), but that there is space for not knowing, genuine questioning, humility and silence! 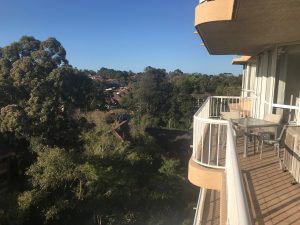 Why do I say all this? Because in seeking to share with you something of what is going on here, I am conscious of how it possible to give, inadvertently, a false picture.   I am more than happy for example to share this photo of the view from our apartment – it IS lovely to sit out on the balcony on a Saturday afternoon, read the paper and have a coffee.   But then I could miss out the fact that we had the pest control people in because of a cockroach that scampered across Annabel’s path the other night. Paradise has pests.

I could tell you about the French hairdresser who was so enthusiastic about Australia –she told me that she moved here to get away from the violence in Grenoble and France (by the way I find it fascinating that the UK media are almost totally silent about the weekly violence in France –There have been hundreds of riots, thousands injured and at least eight people killed – but almost total silence – why?). She loves the beauty of Sydney, the fact that there are plenty jobs and above all that there is peace.   It is indeed a privilege to live in such a place. And yet underneath the surface there is also a heart of darkness that is expressed in violence, sexual abuse and greed.

I was thinking about this in terms of our Third Space launch on Friday. Sometimes one reads about church/Christian meetings that are all blessing. The Lord is always present, the people are always happy and every event is ‘awesome’. Now I am a big fan of being positive about what is happening – but the trouble is that at times that can be discouraging.   When David Meredith was in Smithton, and I was struggling in Dundee, I would phone every week, usually on Monday, and we would compare notes. “How was yesterday?” I would ask, knowing the answer!   “Awesome…..we had a great day…new people….someone converted….packed church” he would invariably reply. Because we are good friends and I knew him well – I knew he was telling the truth, and rather than discouraging me in my tiny and slow growing congregation – it encouraged me and caused me to be thankful and hopeful.   But I could understand why he could not say that in public…because it sounds like boasting and would cause some to stumble – either through jealousy, discouragement through comparison, or cynicism.

The danger of course also runs the other way. We can convey a sense of doom and defeat that communicates nothing but despair.  Some people seem to find security and satisfaction in misery.

Which brings me on to the launch of Third Space on Friday.   My first three months here have been spent setting up Third Space and providing an answer to the question – ‘what are you doing here?”   It has been invigorating, challenging and encouraging. I have loved many aspects of the work and I was looking forward (albeit with some trepidation) to actually getting the official launch done.

We met with Christian leaders in Scots Presbyterian Church in the centre of Sydney on Friday from 9:30-12:30am. Everything was set up for a good day – we had some excellent people coming, there was a full programme and we even had some positive publicity published the day before in Eternity magazine. And we did have a good day. Steve McAlpine spoke insightfully about the current state of Australian culture, Peter Kaldor gave an explanation of the origins of the idea of Third Space – the Third Space team was introduced (Rob Martin – Bigger Questions and Apologetics; Russ Matthews – Reel Dialogue; Caroline Spencer – Women’s Networks; Tony Wright – The Word One to One, as well as Steve and yours truly).   There were some good questions and comments and the time flew by.

But….and you knew there was a ‘but’ coming – the launch was not what I had hoped. It’s really hard to define but I felt there was something missing. I know that it is unwise to go by feelings, but the Lord did make us sentient beings – especially those of us who are Celtic mystics! I can’t really describe why – and one can over analyse – but at the end of the day I was quite discouraged and flat. Exhaustion, the attacks of the Evil One and other factors doubtless played a part – but there was something else. Often when one feels like this we can look at others and seek to play the blame game. Not in this case. I think the main reason I was discouraged was not because of what others had or had not done, but because of a sense of personal failure. The day was good – but I wanted it to be brilliant! And the reason that it wasn’t was largely my fault. I was responsible for the whole thing and I got some things wrong.

Please don’t misunderstand me – I am not in the slough of despond and I am greatly encouraged by and excited for the work of Third Space here.  I had probably anticipated too much for one particular meeting which I misjudged.  As a Christian who believes in the sovereignty of God, the sinfulness of humanity, and the love of the Father; I expect to get things wrong and I expect to have meetings that don’t go exactly as I planned or as I would desire.  But those beliefs don’t stop you feeling things – they just regulate and set boundaries to your feelings.

That works when things go the other way as well. Last week we also had some brilliant meetings –  We had an excellent planning meeting in Adelaide, I loved speaking to a boardroom full of Superannuation managers (called Super Encouragement); the lawyers breakfast, and perhaps above all, the Australian Christian Academy in Western Sydney. The latter was for me especially moving. The 16-year-old teenagers who spoke to me afterwards were deeply moving.

I am passing on this reflection because I hope it will be helpful to those who suffer from discouragement in any way and of course to encourage you to pray. The potential for the work of the Gospel here is phenomenal…I pray that I don’t get in the way…and that the Lord will do exceedingly more that we can ask or think.

I am looking forward to worshipping with the Lord’s people in St Thomas’s today. Although I still miss St Peters (every night this week I have dreamt about the congregation), it is great to belong to a church family, where the Triune God is worshipped and His word honoured.   Wherever you are – have a great Lord’s Day…may you be in The Spirit.

Letter from Australia 8 – Lawyers, Politicians, the Resurrection,  the secret Garden and a Pair of Trousers