From a distance it looks as though the United Kingdom is having a collective nervous breakdown.  According to Owen Jones, the Guardian, the BBC, Sky news and most of the political classes Boris Johnson has started a coup against democracy.

What is going on?  Are tanks on the street, being bravely challenged by the Middle Classes as they seek to protect democracy and fight for the poor?  Surely it’s the end of the world as we know it!

Except it’s not.  Although I suppose that after years of Project Fear in an attempt to stop Brexit there are those who actually do believe that civilisation is ending and Britain is about to turn into Pinochet’s Chile.  I even saw one woman exulting that she and her friends were stocking up with cans of baked beans as they await the inevitable apocalypse.  I think I’ll start a new TV show called ‘the Waitrose Survivors’.

After years of trying to delay/stop Brexit and a series of seemingly endless ‘red lines’ and ‘last chances’ it seems as though decision day for the UK parliament is now close.  As regular readers of this blog will know I am a supporter of Brexit – believing that the EU is fundamentally corrupt and anti-democratic – and that we should be out of it.  (I don’t intend to revisit all the arguments again but you can read my original post on the subject here – European referendum – The TIPPing Point  ) What we will do in this post is try to give an appraisal of where we are at and what is going on.   Brexit keeps introducing us to new words and concepts – the prorogation of Parliament being just the latest.   So this is an update for those who want to know what is happening.

The Prime Minister has ‘prorogued’ Parliament.  What is prorogation?   It is not a coup.  It is not suspending parliament for six weeks.  It is not the negation of democracy.  It is the normal way our parliament works.

‘The act of proroguing parliament brings to an end the current parliamentary “session”. This leads to a short break before a new session begins. Parliament runs in “sessions” that generally last for around one year, although the length can vary. A session opens with a “Queen’s speech” where the government sets out the laws it wants to pass over the coming session. Parliament must then approve the speech by voting in favour of it. Parliamentary business which hasn’t been completed by the end of a session is normally brought to an end (meaning it can’t be picked up at the start of the next session).”

The current parliamentary session has been running for two years (the longest since the English Civil War in the 17th Century).  It was due to end anyway.  The big concern for the anti-Brexit politicians is the timing.  This will reduce the amount of time that they could debate Brexit.  But only by three days!   Given that they have had three years to debate and frustrate Brexit an extra three days is hardly going to make much difference.  No one believes that our MPs are suddenly going to get together and do something which honours the referendum (what they promised to do) and prevents Brexit (what they want to do).  They are just time wasting.

Why the Hysterical Reaction?

There is little doubt that there is a hysterical reaction.  Reading some UK newspapers, listening to the BBC and Sky News is actually cringeworthy.  Even the Financial Times has lost its sense of perspective.   It would be amusing if it were not for the fact that the stoking up of such fears leads to a hysteria which can quickly morph into hatred. Take for example this tweet from Phillip Pullman

Can you imagine the reaction if any ‘right-wing’ politician had stated that those who disagreed with them should be hung?!  But apparently, this is now acceptable language in our suburbia.   Hate speech is ok as long as you direct it towards the right sort of people.

The argument is that the general wailing and gnashing of teeth is all about British democracy.  But I don’t buy that.  Firstly, as seen above, prorogation does not undermine or prevent democracy.  It is a parliamentary device which is regularly used – without the hysterical reaction that we are currently faced with.

Secondly, those who are most upset are far more concerned about being in the EU than they are about democracy.   There is a petition which at the time of writing has about 1.5 million signatures – what it says shows the intention.

‘Parliament must not be prorogued or dissolved unless and until the Article 50 period has been sufficiently extended or the UK’s intention to withdraw from the EU has been cancelled.’

The petitioners are not concerned about the prorogation of Parliament per se – they just don’t want it to be used to further Brexit.  If it was being used to prevent Brexit they would be jumping for joy and breaking out the champagne!  No – for them the EU is everything.  The EU is the Saviour.  Without the EU civilisation will end.  ‘We love EU’ they chant as they wave their EU flags and sing what little they know of ‘Ode to Joy’…

‘Democracy’ is just a meaningless word, suitable for justifying their own actions and feelings.  Most don’t actually believe in democracy – they are technocrats who think that they should be the ones who determine what happens, not the ‘untermenschen’ whose vote unfairly is as equal as theirs.   They regret that we actually had a democratic vote (‘it was all lies which the stupid, racist plebes fell for).  They ignore the fact that the EU is fundamentally undemocratic.  They complain about the loss of parliamentary sovereignty, whilst at the same time campaigning to lose parliamentary sovereignty (once your laws are made by an outside body you are no longer sovereign).  They accuse those who voted for Leave of ignorance, but most  have little idea of what the EU actually is – a supranational body to which national governments hand over their sovereignty).

It is interesting that the petition is far more popular in Richmond and Brighton than it is in Rochdale or Dagenham.   This is not a mass uprising of the people….it is largely based on class lines – with those in control being desperately concerned that they might lose their control.   Of course there are those who are genuinely upset and worried (apparently 17% of people in Scotland are ‘terrified’ – such has been the effect of Project Fear), but their feelings no more constitute the truth than those who genuinely think the world is going to end next year, mean that we should all be cancelling our holiday plans.   Its the 2019 version of Millenium bug syndrome – remember when we were told that all the computer systems would break down,  food would disappear and planes would fall out of the sky…etc.  Now we are told that the whole system will break down, we won’t be able to get insulin and planes won’t fly.

As I watch all this from a distance I am embarrassed and in somewhat of despair for my country.  From Sturgeon to Corbyn, Farage to Johnson we are led by a ‘parcel of rogues’.  There is none righteous – no not one!    I don’t believe that Sturgeon has the political nous that she is credited with – her alliance with Labour, the Lib Dems, the Green and some Tories in order to prevent a referendum vote being enacted will come back to bite the SNP.  Corbyn is pathetically weak.  For decades he has been anti-EU but now he is going against some of his most fundamental principles in order to try and get power.   If there is a general election, Farage will probably stand his Brexit party against the Tories and that could cost the pro-Brexit parties a majority in parliament.  As for Johnson – I don’t trust him.  Although some of the people he has surrounded himself with do give me a glimmer of hope that a meaningful Brexit might actually happen.

What will happen next?

There are four possibilities.

1.The most likely thing is a general election.  If Remainer MPs get their act together and the strange alliance of Labour, the Lib Dems, the SNP, some Tories and The Green vote against the government it will fall and there will be a general election.  There is talk of a ‘government of national unity’ – which is in reality a government of prevent Brexit at any cost – it’s a strange kind of ‘unity’ that seeks to further divide an already divided country.  That would be a lot closer to a coup but is unlikely to happen because of the personalities and rivalries involved.

2. Leave with a last minute deal – If Johnson’s gamble works my view is that a deal is much more likely.  Once the EU work out that their Trojan horse within is not going to work, they will try to come to some face saving arrangement which allows Johnson to say he has achieved Brexit and the EU to retain much of its control.

3. A no deal Brexit.  If there is a ‘no deal’ Brexit – there will be some cost and some disruption.  But life will go on and people will realise that it was neither the disaster nor the salvation they were promised.

4.  Brexit cancelled – If the Remainers succeed and we end up staying in the EU again life will go on….but it will be the effective end of UK democracy and sovereignty.  I also 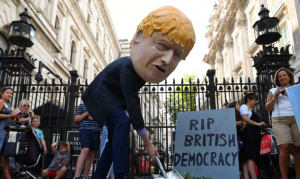 believe that there will be significant political disruption with a rise in extremist groups. Which brings us back to where we came in….those who are cynically (or ignorantly) campaigning against the prorogation of parliament on the spurious grounds that they are defending democracy, are in actual fact campaigning to negate democracy – by preventing the implementation of the biggest democratic vote in UK history and by handing over our parliamentary sovereignty to an unelected, unaccountable, supranational body.  I pray they don’t succeed.

Brexit for Dummies (and Hope for Visionaries)