Welcome to your weekly Brexit update of news and articles.   We havn’t really moved on – but the unfolding narrative is still the same.  The House of Commons (and even more the Lords) is desperately seeking a way to avoid Brexit and as I have said many times, will probably succeed.  So here are some of the lowlights in this past week.

Those who control the language control the agenda.  When those who did not accept the Brexit vote looked at ways to stop it the instant cry was the standard EU one, ‘you got it wrong – vote again until you get it right”.  Firstly this was called a ‘Peoples Vote’ as if the EU referendum we had was actually not a people’s vote.  Now the order has gone out and so everyone refers to it as a Confirmatory vote’.  The idea is that whatever deal is dreamt up between May and Corbyn, it should go to another referendum.  There is in principle no problem with that if we are being asked to choose between the deal and No deal.  But those who want this referendum don’t want a confirmatory vote – they want another vote on staying in the EU – because they think they will win it this time.   So in a mockery of democracy we will end up with another referendum in which the losing side on the last referendum will get to vote on their choice again, but the winning side will not get a vote.   The last opinion poll said that the most popular option amongst the public at 46% was No deal.  But our politicians won’t even let us vote on that.   Philip Hammond’s Tories,  Yvette Cooper’s Labour and Sturgeon’s SNP are all united in seeking to prevent Brexit.

The disgust that people feel about politicians is really justified.  Most of the MPs who are doing their best to prevent Brexit promised in their election manifestos that they would do their best to deliver it.  Like Yvette Cooper who specifically promised “I will not block Brexit’ – yet last night her bill to do precisely that passed by one vote in Parliament.  The hypocrisy is breathtaking. The fact that it was passed because of the vote of a Labour MP, Fiona Onasanya, who has been convicted of fraud and is currently tagged and out of jail  is somehow indicative of the fraud that has been perpetuated upon our nation.

2. A 2nd Referendum could result in an even larger Leave Vote

As well as the You Gov opinion poll which showed No Deal as the most popular option, there have been other straws in the wind which indicate that, contrary to the received wisdom, there is a growing reaction against the EU.   For example ” I voted to stay in the EU but the arrogance and snobbery of Remainers has changed my mind”

This article from Piers Morgan is in a similar vein – he explains why he has changed from Remain to Leave.

I voted Remain, and still don’t think Brexit is a good idea. However, if there were to be a second EU referendum, I would vote Leave. Not because I’ve experienced some Damascene conversion to the Brexit cause — I haven’t met anyone who has changed their mind about it and suspect these people don’t exist outside Alastair Campbell’s hysterical Remoaner mind — but because I would be so furious at a second referendum happening at all. What’s going on now is a disgrace: a House of Commons packed with Remainer MPs trying everything in its power to reverse the 2016 result or dilute Brexit so much that it ceases to resemble anything that Leavers voted for. I find this assault on our democracy far more sinister than anything that might befall us in the event of a no-deal departure from Europe, not least because those shouting loudest about what a disaster no deal would be — like Campbell and Tony Blair — all once assured me that if Britain didn’t join the euro, it would also be a disaster, and in fact it was the best thing we never did.

The third is this impassioned plea from a former Remainer..

3.  There are Different Opinions within the EU

The EU has an  enormous advantage – because those who are doing its negotiations don’t have to face the electorate and so can play hardball without worrying about the consequences.  Merkel is concerned about no deal, Macron seems more sanguine.  This speech from Alice Weidel one of the co-leaders of the EU in the German Bundestag is fascinating. (Note posting this here is not an endorsement of the AFD or of Weidel- who is an interesting character – she lives in a same-sex partnership and yet leads an anti-immigrant party.) .  I post it to show that the EU view is not monolithic.

The EU of course is able to play hardball and it will.  People are talking about how May has handed this over to Corbyn – but in reality it is the House of Parliament that has handed it over to the EU.  It is the EU that will have the final say.  Of course our MPs want to hand sovereignty over to the EU anyway.  Their purpose is to take back control in order to hand control over to the EU.   Then they can get on with their parliamentary games, safe in the knowledge that they don’t really have to do anything again to justify their existence.

4.  Beware of the Propaganda

Everyone complains that the other side are liars – but seem far too happy to retweet their own.  We must learn to question everything – whether the £350,000 on the side of the bus – or the £4,600 cost to every household of treasury forecasts.   And beware of social media propaganda.  Have a look at this photo….It was being retweeted as an example of effigies of Remain MPs being hung by pro-Brexit demonstrators.   Except it is a photo of student protestors in January campaigning against student suicide. 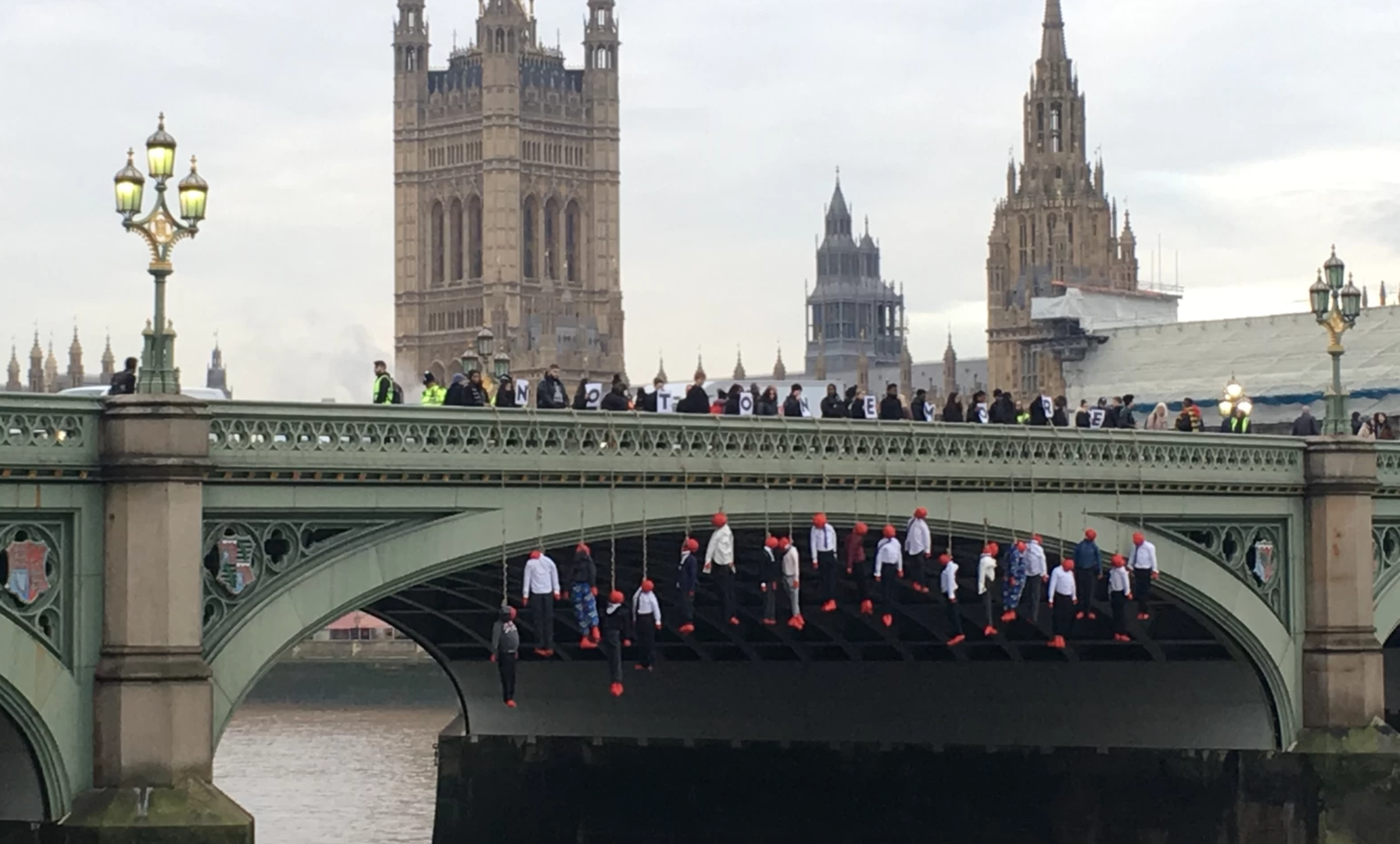 Another example on the other side was a tweet going the rounds which talked about former EU Commissioner, Neil Kinnock, getting £1.3 million per year pension.  His pension is actually £87,000 per year – the whole pot is £1.3 million.  I know we can’t always get it right – but we should fact check as far as possible and not just assume the worst of our enemies or the best of our friends.

Brexit article of the week

Read the latest from the SDP’s newest recruit – the Spectator columnist  Rod Liddle….

We voted to leave the European Union — not part of the European Union. The MPs know this, but the notion of them abiding by the decision was never really possible: they drifted further and further away from that simple resolution as the weeks elapsed. But before that, almost immediately, the whole purpose of the exercise — to leave the European Union — became derailed by the Prime Minister’s immersion in the process of leaving, rather than leaving itself. And thus we had the frantic scurrying between Brussels and London and then back into the House to see which part of the process would least offend the two wings of her divided party. The process, then, became the whole point.

And so the longer the process goes on, the much more likely it is that we will have a Brexit in name only, or not at all, or a second referendum, which will be gerry-mandered to ensure that Remain wins. The process has allowed our MPs gradually to renege on their mandate, all the more so as the distance of time grows between 23 June 2016 and now.

Finally here is the photo of the week – the DUP MP Emma Little-Pengelly took this in the chamber (contrary to rules!) showing the weariness of MPs as they struggle to get out of the bind they have put themselves in. 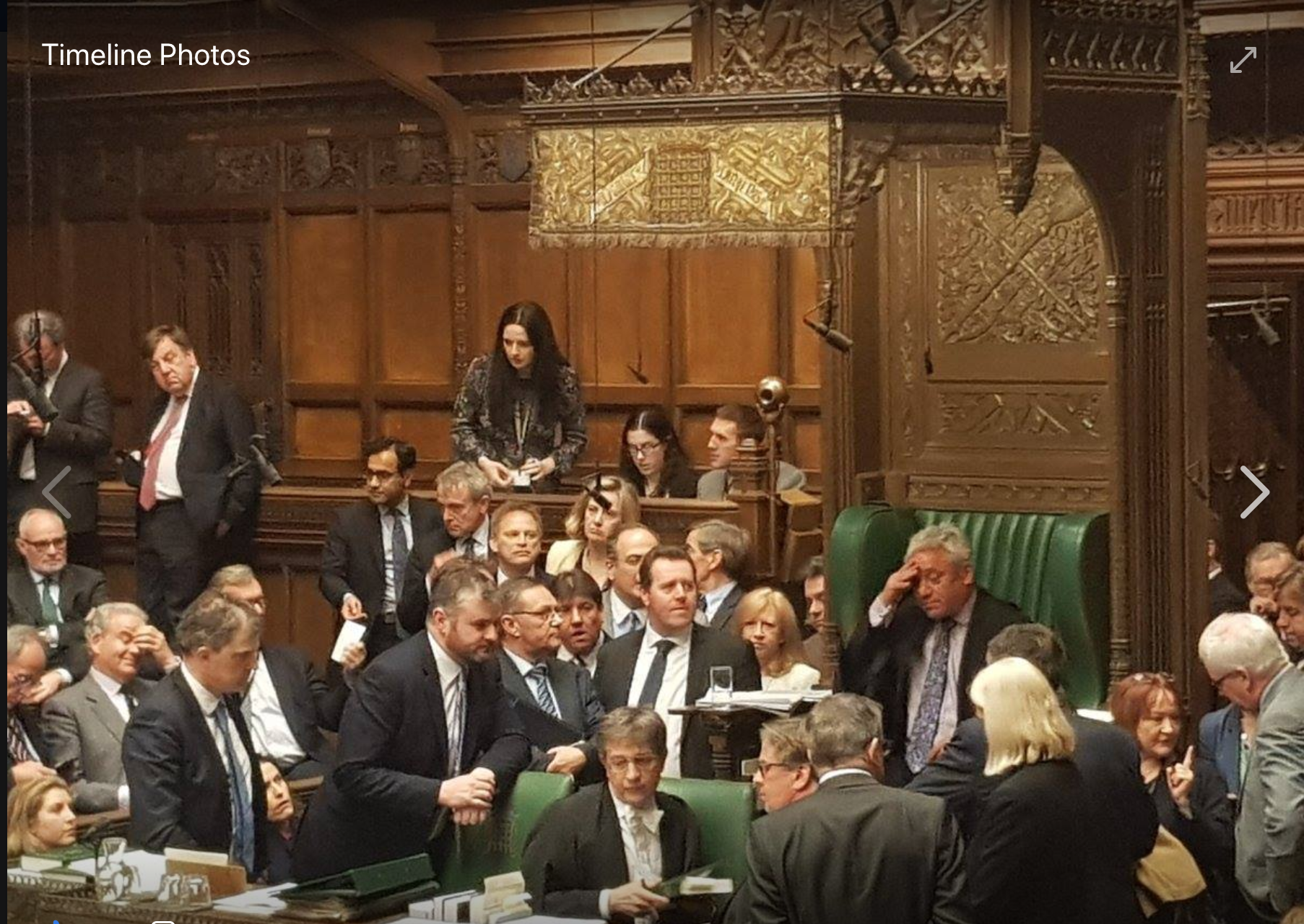 Indicative Votes Indicate Chaos – The People’s March; The EU and the Internet and Cars