Autism is something that almost all of us will come across and some of us will have.  As a result of last weeks podcast   I received some very helpful comments from a scientist who is herself autistic – Elizabeth Guest.    With her permission I am going to share her comments with you.  Autism is important – but also trying to keep abreast, or ahead, of issues in our culture is very much part of what this blog is about. Elizabeth introduced me to the concept and ideology of neurodiversity.  But before we look at that lets just ask –

“a developmental disorder of variable severity that is characterized by difficulty in social interaction and communication and by restricted or repetitive patterns of thought and behaviour.”

“Autism is a lifelong, developmental disability that affects how a person communicates with and relates to other people, and how they experience the world around them.”

You can get lots of information (although not all of it is helpful!)  from The National Autistic Society.

This article from the Gospel Coalition is also helpful.

And this video from Dr Grant MacAskill (incidentally a former elder from St Peters and now Professor of New Testament at the University of Aberdeen) is really helpful.

One interesting aspect is that whilst autism affects from 1 in 50 to 1 in 200 people in society – there is some research which suggests that there is a link for some people between autism and gender identity disorder.  Some have argued that as high as one third of transgender people are also autistic.

I have been following your blog for several months now and mostly enjoy it. Occasionally I buy one of the books you recommend so that I can read it for my self. I like the wide range of topics you cover. It is very refreshing to get a different point of view and I like the way you link to a range of different articles on Twitter.

I am writing to tell you about the neurodiversity movement. The guy in the video clip, who complained about the noise of people chatting and wanted them to be quiet (Quantum podcast on Friday 9th August) was probably autistic. A common problem with autism is sensory sensitivities where the senses are too sensitive. Noise is a very common hypersensitivity, which really nothing can be done about. Having it can be very difficult. It is perfectly possible that he was struggling to focus because of people talking.

I am autistic and I find the background music in shops very difficult to deal with, which affects everyday life quite significantly. I too find conference situations difficult because people do like to chat. When this happens, I struggle to focus on the conversation I am supposed to be having. It can be so bad that I get bits of sentences from different conversations, which (of course) does not make sense. The solution is to go and find somewhere quieter.

What was going on in the video clip was from the “neurodiversity movement”. ‘Neurodiversity’ essentially means autism although other conditions are included to make it more inclusive. This movement promotes the ideas that autism is an identity (I don’t like this: I feel I am so much more than my autism) you are disabled by society society should accommodate you completely (this is actually impossible because autism is a very heterogeneous condition) Personally, I think that this is a load of dangerous nonsense.

But many autistic people have been taken in by it. It gives them a community which kind of understands. However, in order to be part of this you have to agree with everything, including a strong stance in favour of LGBT+. For many people, it is the first time they have felt accepted as they are. It is comforting to blame society for your problems. (LGBT activism does this too) However a side effect is that they want everyone else to fully accommodate them, even if this makes other people uncomfortable.

I do workplace assessments for autistic employees and we are increasingly coming across those who provide me with a long list of unreasonable “reasonable adjustments” they think their employer should make. Under these circumstances, my recommendations generally include a list of “reasonable adjustments” the employee should make for their colleagues. The autistic employee is not happy because they think an autistic assessor should agree with them. The employers are very happy because I am impartial and listen to both sides.

I suspect by now, that certain aspects are starting to sound familiar. And yes, they are trying to use LGBT techniques to encourage/force society to change in their favour. As someone who disagrees with them, I am accused of “internalised ableism”. However, I struggle to get my head around the idea of “ableism”.

Just as in LGBT, they are very abusive to those who disagree. There are many autistic people, generally those with more severe autism and a scientific bent, who do not agree with them. They also abuse parents of autistic children who are struggling with their children. I think this is appalling. In the uk, neurodiversity activists are making a lot of noise. The labour party has treated their demands sympathetically. And guess what: they have also infiltrated research and the medical profession. Their cry is “nothing about us without us”, which sounds good but which actually excludes a lot of autistic people. It is already skewing research about autism.

The guy in the video has probably subscribed to the neurodiversity movement. His request was aimed at helping him to function. Personally I think it unreasonable to expect everyone around me not to chat to each other. People like to chat. Social chit chat is about building relationships, and that should not be denied to people. The solution is to find a quieter place – where you will find others who prefer quieter places. Autism does not have a monopoly on sensory issues. It is just not possible to accommodate everyone all of the time!

If you have any questions about this topic, do not hesitate to ask. I will finish with a book recommendation: “In the valley of the shadow” by Hanns Lilje. It is the account of a pastor who was arrested by the Gestapo towards the end of the second world war. He was at a strong risk of execution, but was liberated by the allies. He describes how God helped him. I have been going through a very difficult time for several reasons. The world has gone completely mad. This book has helped. The world went completely mad in Germany. God supports and helps me through the difficult times. He uses difficulties and suffering to draw us closer to himself. Y

Yours in Christ, Elizabeth Guest

This is such a helpful contribution!  I am very grateful to Elizabeth for sharing it. She is a scientist ( background is Maths, Artificial Intelligence, and Linguistics), which she points out is “actually a good background for doing research into autism.”    She has this paper published in the Disability and Society journal…however – as has become the pattern in some areas of academia , neurodiversity activists have tried to get it removed. 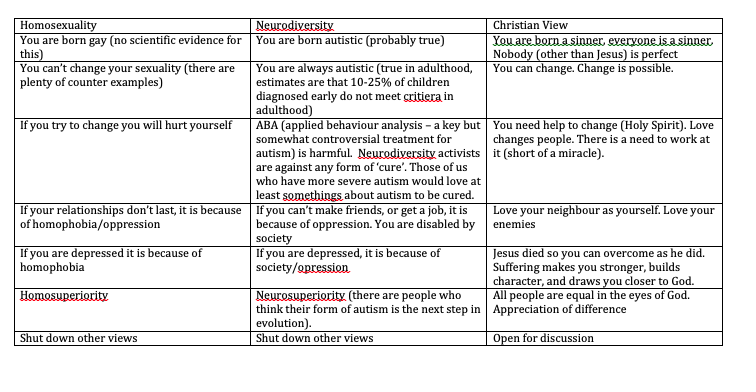 When working with autistic adults, and their parents, I take the Christian view, which is at odds with what others do. I believe in growth and development. I have found that people respond favourably to this. It is remarkable what happens when you believe in someone who has been failed by the UK education system. This has made me unpopular as well because many autistic adults tend to prefer my approach to everything else that is available.

God knows. God is changing me. God is leading. I am drawing closer to God and the future is becoming a lot less scary because God is squarely in it.
My love and compassion for other autistic people is growing. I long for them to know Jesus, but they are a particularly difficult group to reach.

May the Lord bless Elizabeth, and all who suffer from autism and may he grant all of us wisdom as we seek to help and value our autistic brothers and sisters. 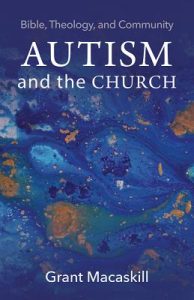 Grant Macaskill’s book – Autism and the Church – Bible, Theology, and Community is out later this year.  I have not read it yet – but knowing Grant I am sure it will be through, well written and helpful.