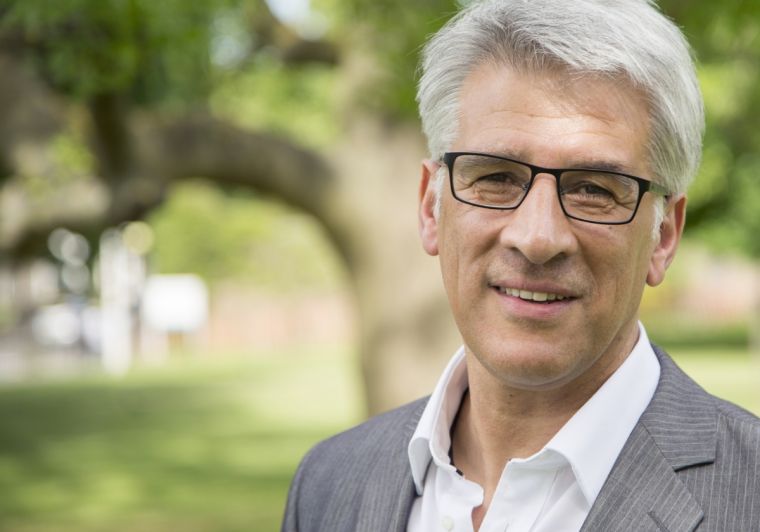 Steve Chalke is often presented on mainstream Christian media (and indeed the secular media) as a Christian preacher who presents one point of view – that many do not agree with – but who nonetheless remains a Christian whose views are just a different take on Christianity.   In reality it has been many years since Rev. Chalke has taught anything approaching biblical Christianity, but in the latest of his hubristic attempts to emulate Luther’s 95 Theses, he has reached a new low. His attack on the cross of Christ is desperately sad and is about as anti-Gospel as you can imagine.

In three talks (Chalke Talk 33 – Traditional view of the cross “cheapens God’s forgiveness”, 34- “Misunderstanding the Cross has made Church ‘angry’ and ‘judgemental’ and 35- “Christianity is not a personal rescue plan”) Chalke shows just how far he has gone.   Here is no. 35

I’m afraid that I can’t recommend watching this or any of the others. It’s not just the smarmy and mocking approach that makes them so hard to watch – it’s the dumbed down reasoning and the sheer anti-Christian teaching done in the name of Christ.   Chalke in this sense is far more dangerous and far more dishonest than most atheist apologists.

Here are some of the arguments he makes. (Some of them are just 19th Century Protestant liberalism rehashed (although Chalke seems genuinely to believe he is being original – I suspect he is being fed this stuff and doesn’t really know what he is talking about) and some of them are so foolish and irrational that I suspect some people will think I am making them up- but if you doubt it listen to the talks).

1) He rejects any concept of the wrath of God – if God is angry he is a slave to his own anger – despite what the Bible and Jesus teaches. “Since we have now been justified by his blood, how much more shall we be saved from God’s wrath through him!” (Romans 5:9).In his comments on the hymn ‘In Christ Alone’ he supports the view of the PCUSA that it is wrong to sing about the wrath of God being satisfied and should be replaced with ‘The Love of God was ‘ magnified’ – Chalke and his fellow liberals in the PCUSA forget that the love of God is magnified by the wrath of God against injustice and sin, being satisfied. I’m not sure how the Love of God is magnified by just excusing rather than dealing with sin.  That’s ok Hitler – I’ll just forgive you, because love wins!

2) He takes the world as his criteria and uses their arguments. He accepts the caricature of the Simpson’s Ned Flanders.   It bothers Chalke that the cross is ‘foolishness to the world’ – It bothers me when professing Christians try to so amend the cross that it is acceptable to the world!     “For the message of the cross is foolishness to those who are perishing, but to us who are being saved it is the power of God.” (1 Corinthians 1:18)

3) Its pagan to see the cross as a sacrifice of blood.   It is equal to virgins being sacrificed. The early OT is simply a reflection of the worship cults of the pagan religions that surrounded Israel. Chalke’s understanding of history is as poor as his blasphemous theology.   The early OT (as well as the later and the New) is a challenge to the pagan culture, not a copy of it. Chalke’s cavalier and dishonest use of the Bible is shown by his misuse of Hosea 6:6 – God desires mercy not sacrifice.  This ignores completely the context – the wrath of God (which Chalke says doesn’t exist) against his people for ignoring his covenant. We sow the wind and we reap the whirlwind (Hosea 8:7).

4) Why doesn’t God just forgive sin – after all that is what he asks us to do? If God needs sacrifice is there really forgiveness? Yes – without the shedding of blood there is no forgiveness of sins (Hebrews 9:22).   Chalke forgets that we are not God – without sin, holy and pure. And that sin is ultimately against God, not us.

5) The Cross makes an absolute mockery of Jesus’s teaching. God himself is unwilling to follow the teaching of Jesus. Like most attempts to be smart and witty, this just ends up being blasphemous. It is also a nonsense and a dishonest misrepresentation of the teaching of Jesus – who taught about the wrath of God, judgement and hell more than anyone. Chalke does not believe in the Jesus who came to give his life as a ransom for many, for their sins.

6) The substitionary theory of the atonement is something borne out of 16th Century European reformation thinking, driven by the legal mindset of lawyer John Calvin.   Jesus taught us our Father, Calvin taught us our lawyer. Steve Chalke is the evangelical Dan Brown of church history. He has clearly not read either the Church Fathers or John Calvin – whose teaching about the Fatherhood of God is beautiful. Lies are not any the more attractive just because they come in the form of a Twitter like sound-bite.

8) The cross is a demonstration of God’s love but not Christ dying for our sins. Jesus did not die on the cross for our sins but just absorbs the injustices of all around.   The Cross demonstrates that Jesus practiced what he taught….he goes the extra mile and just absorbs evil, he soaks up hate, rejection and pain. Demonstrating what a true Messiah really looks like.   The cross is not about Gods anger but humanities.  The idea of the cross as just a demonstration (it does of course demonstrate the love of Jesus) is horrific. If the cross was not necessary then it is as ridiculous to say it was a demonstration of love as it would be for me to say that my jumping of the Tay Bridge and committing suicide somehow showed my wife how much I loved her!

9) The Biblical/traditional teaching of the cross is “biblically deficient, pastorally disastrous and culturally catastrophic. “  The truth is precisely the opposite.   Chalke’s view is demonstrably opposed to the Bible. It is also pastorally disastrous. Take away the cross and I have nothing powerful and real to offer my people. What can wash away your sin? Nothing but the blood of Jesus.   And the cultural catastrophe occurs when the Church compromises with and just reflects the culture. Chalke sadly is someone who reads the bible through the lens of the culture, not the culture through the lens of the bible.

10) Putting everything on the Cross reduces the 33 years of Jesus’s life and work to one weekend. That is not what the Gospels are about. Chalke clearly does not get the Gospels. If anyone reads them you will note that 50% of each Gospel is about the death of Christ. They are not traditional biographies.   The Gospel writers clearly saw that the heart and centre of their good news, was the death and resurrection of Jesus. This is why he came. The sneering mocking comment about a weekend is appallingly ignorant. We know almost nothing about the first 30 years of Jesus life – that is for a reason. His ministry and teaching did not begin until his baptism. His miracles proved he was the Son of God, his teaching got him killed and all this was the purpose for his life. For Chalke to be so sneeringly dismissive of the Gospel writers is for him to be sneeringly dismissive of Christ.

11) If God needed a sacrifice how could Jesus go round forgiving sins before his death?   Jesus would have said to Nicodemeus – ‘ you have to be born again but unfortunately Nick – not just yet”. Why did Jesus preach or teach at all?   If it all depended on the cross?  It’s hard to see how this argument can be taken seriously.   Abraham, Moses and all the saints of the Old Testament were forgiven by looking forward to Christ, those of us who live after the Cross look backwards. The Cross is the centre. Chalk again mocks in ignorance.

12) Its like an instant forgiveness cash machine – a personal rescue plan – no inbuilt challenge to moral change   It makes Jesus death the entire content of our good news.    Yes we do preach Christ crucified. That is the centre of the Gospel message. Christ is dead for you, is the Good News. Christ is risen for you is the Good news. But the notion that this has no moral implications is absurd. It is beyond irony that a man who teaches that the Gospel is ‘God accepts you just as you are’, now argues that it is about ‘moral change’. Chalke is a classic liberal legalist, who because he rejects the Cross-, imposes a burden upon people that no one can carry

14) The biblical view of the cross fails to engage, hearts, minds and thinking of our culture as we search for answers to questions. Fails to speak to or challenge our culture in any significant way. What does the Cross mean for wider affairs of our local community or our governments foreign policy or the challenge to the market economy or the issue of climate change?  The Biblical view of the Cross does engage hearts, minds and the thinking of our culture. It challenges and it goes far deeper than the cheap, superficial and shallow applications of Chalkes version of the Cross.   Nothing challenges our culture like the Cross. It is offensive to our culture. Chalkes message on the other hand is just a political and cultural liberalism that tells our culture it is right all along.

There are however two areas where Chalke is right. The words of the songs we sing matter as do the words of the theologians we read. Which is why I question the wisdom of mainstream Christian media who report Chalke as a Christian teacher, when he clearly is nothing of the sort.

Chalke is also right to say that what we believe shapes the way we behave. Indeed. “For, as I have often told you before and now tell you again even with tears, many live as enemies of the cross of Christ.” (Philippians 3:18)

And there is one area of cheer as regards Chalke. Whilst the secular and religious establishments welcome him, it appears that ordinary Christians are not interested in his heresies. His videos have hardly taken off – the one I have just cited was at the time of writing viewed by just 382 people. I suspect that this will not be a new Reformation for the Church!   But we need to beware and to warn the Lord’s people of the dangers of the wolves who seek to destroy the flock through their false teaching.   Enough.

The Chalke Conversation – Agreement and Disagreement

PS. (Please feel free to pass this on to those most at risk – those young in the faith who may be deceived by the smile and the nice words and what at a superficial level appear to be attractive concepts)