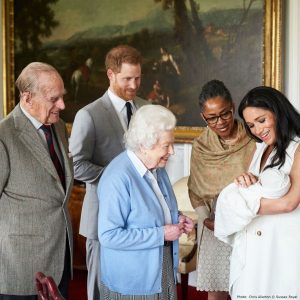 This weeks Quantum (click the link above) welcomes Prince Archie and constrasts the joy of new birth with the horror of those who exult and boast in abortion.

In that regard it is good to hear that Asia Bibi has gone to Canada to be reunited with her daughters, but embarrassing to hear the Prime Minister in the House of Commons (from around the 29 minute mark) in effect admitting that it would not have been safe for her to come to the UK.

Also in that regard it is good to hear some Muslims speaking out against ISIS and the Islamist movement – like this Imam in Australia.

And in Australia it’s not just Israel Folau who is in trouble.  The rugby player Samu Kerevi got into trouble for tweeting ‘I love you Jesus’ at Easter.  But the former Wallabies coach, Alan Jones, grasped the wider context.

“The battle has just begun, and it’s a battle for all Australians. If we’re not free to articulate our religious beliefs and quote from the bible, and if we’re not free to speak for fear that someone affects a hurt or is part of the offence industry, if that’s where we’ve reached in this country, we’ve reached a dark place and we are all at risk.”

Meanwhile the censorship by the Corporates grows apace.    Facebook has banned a number of people who they regard as ‘extremists’ .  But what is an extremist?  According to FB posting a Paul Washer sermon is ‘hate speech’.   Continuing the banning theme – there is no forgiveness nor grace in the modern world – Brian Soutar is barred from sponsoring the Turner prize because of his perceived attitude to homosexuality.

But nothing speaks intolerance like the Trans madness – In Southend a primary school bans ‘boys and girls’ being used.  A tax expert loses her job for saying that a woman is a woman.

We also look at the fear of extinction through climate change – and the reaction to the sad death of Rachel Held-Evans.

Most, if not all of these children would be killed in the Holocaust in an attempt to eradicate the Jews from Europe.  Yet a couple of weeks ago Israeli soldiers sang this same song on German soil.

Finally we look at the extraordinary achievments of Liverpool and Spurs in the Champions League.

Quote of the Week –

Gafcon is a movement “to guard and proclaim the unchanging truth in a changing world.”  As we heard this week, many around the world are being tossed back and forth by waves of confusion, and blown by the wind of the latest, fashionable, false doctrine.  Many are in desperate need of Jesus, who is the only one who can bring salvation. Please lift up his Church daily in your prayers, pray for us as we seek to lead, and join us in proclaiming Christ faithfully to the nations. https://www.gafcon.org/news/a-communique-from-the-gafcon-primates-council