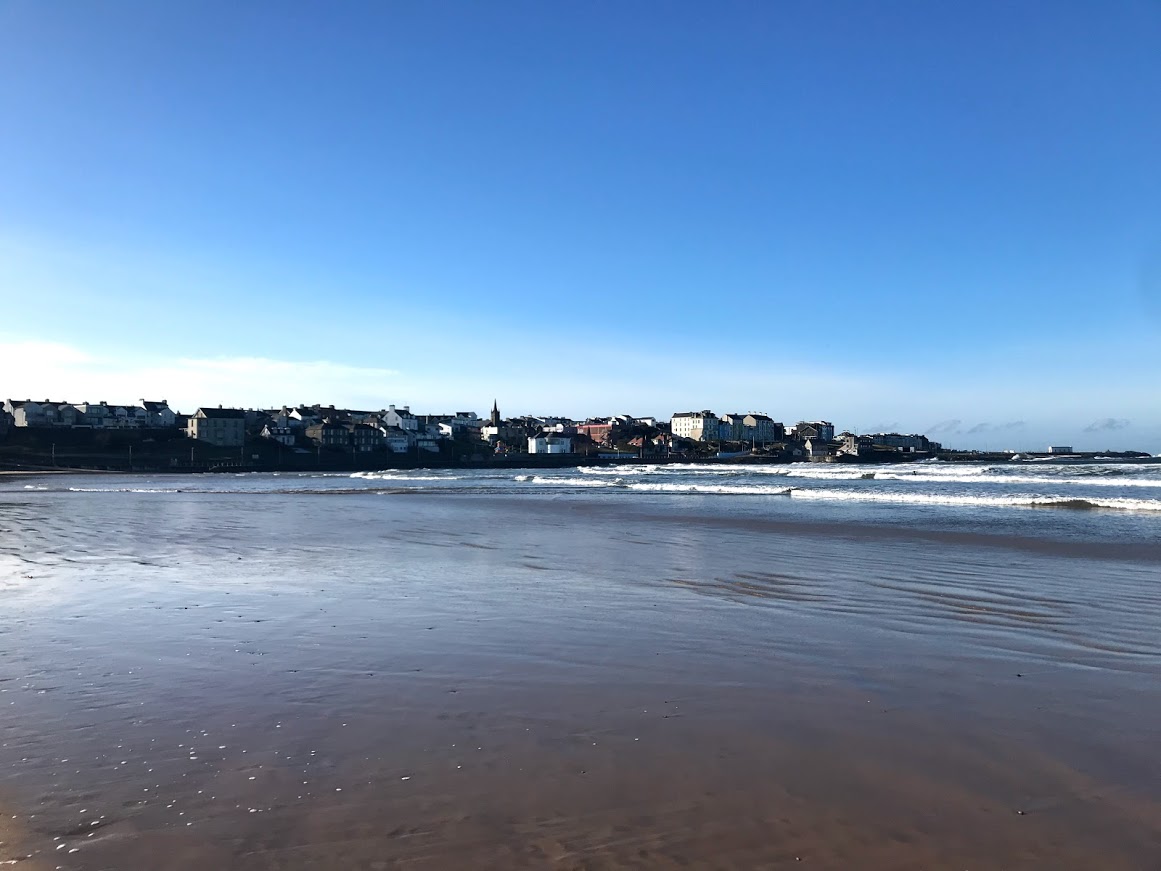 The more I go to Northern Ireland the more I love it….and the more I am concerned and burdened for the Church there.  It has not collapsed like the church in most of the UK, nor as the Catholic church has in Southern Ireland.  But the pressures of secularisation and the forces of materialism, doctrinal and spiritual weakness are threatening to overwhelm.

I had the tremendous privilege of being on the North coast last week – preaching at a series of events organised by eight Presbyterian churches from the triangle of Portrush, Portstewart and Coleraine.   These are just some simple observations which may be wrong, are certainly not the whole story and may not apply to the rest of the country….

This is the East Strand beach at Portrush – even in Feb it was beautiful – and there were many other places around.  Although why people would go surfing in Feb only the Ulster people would know!

The more I get to know the Northern Irish people – the more I like them.  Of course like every people they have their quirks and foibles – but they are generally warm, passionate and hospitable.  The ‘craic’ is good.  The Christian people I met reflected not only the positives of their culture but also the beauty of Christ.  There is an earthiness and practicality which I really appreciated.  I felt at home.  Especially in the Presbyterian churches I spoke in – Dunluce and Ballywatt

3.  The Presbyterian Church is in Decline but has great potential

Whichever way you look at the figures the PCI is in decline.   Down from 375,000 members in 1975 to around 220,000 today.  It has 575 congregations and is still the largest Protestant denomination in Northern Ireland.  There are still many strong congregations but that has the effect of masking the underlying decline and the churches inability to cope with the increasing secularisation.   It seems strange but it is especially weak in central Belfast where it should be strong.    Sometimes the notion of how to do evangelism is a bit dated….for example in Portrush I came across this facing out to sea –

Apart from wondering who was going to see it I wondered how contextual it really is and whether it was communicating the word of God in an effective manner.  Of course it is the word of God, and doubtless God can use it…but is that what we think evangelism is – sticking four billboards in Portrush?   Some will see it as quaint, others as faithful….I have my doubts.  How do we communicate the Gospel to people who see the Bible as at best irrelevant and at worst, the cause of Northern Ireland’s troubles?

But where I saw hope – at least in the churches and ministers I met, was their genuine desire to try to reach out in their changing culture – not just to bunker down.   I was really impressed with the questions, and with the growing recognition of the problem – at least amongst some.   It was good to see that they were willing to take risks and have their meetings in different places to try and reach out….we met in the University of Ulster, Coleraine campus on the Sunday (I thought for eight churches it was a relatively disappointing turn out in the morning – over 500 – although the inclement weather may have had something to do with that…but I suspect there were more than a few who thought that if it wasn’t in their church they could have the morning off – which would indicate a bigger heart problem); for the mens meeting we had a good night in ‘Bob and Berts’ (hopefully coming to Scotland soon) and a great time in the Flowerfield Arts Centre.   It was really encouraging to see a good crowd fill the Dunluce church hall on the last night.  Some of the personal conversations were very heartening.

The PCI has also not gone the route of the Church of Scotland, in adopting an ever more liberal and unbiblical theology.  In fact it appears to have gone the other way.  Which means that there is hope.   If they can combine good sound biblical theology, with evangelistic passion and creativity, as well as Christian community, love and practicality, there is hope.

One issue of inspiration and also concern is the Vineyard church in Coleraine.  I have never been there so cannot comment on the church as a whole, although I had heard of it and occasionally have listened to their podcast.  Their story is quite remarkable and their growth and outreach is commendable.  It is a source of inspiration.  The concern however is that a lot of the growth (not all – there have been many conversions)  is through them drawing in people, especially young families, from all over the North Coast.  I don’t think we can blame Vineyard for that – it’s not as though that is what they have set out to do, it’s just what is happening.   The Presbyterian churches could and should learn from Vineyard – but the concern is that they will give up the good parts of their own heritage the emphasis on good bible teaching and theology – including practical theology.   In the UK as a whole I am concerned about the Americanisation of the church – its big, its glitzy and its successful – and I fear that it lacks depth.  I’m not saying that Vineyard Coleraine is like that – I stress again I don’t know – but the concern is there.  I hope and pray that people are going for real and important reasons – not superficial and shallow.

4. The Church in Ireland has to face up to its history and look forward to the future

I spoke to a remarkable Presbyterian minister whose brother had been killed by the IRA – and he acknowledged the pain that the Catholics had gone through in Northern Ireland.  One of the dangers of being in a society where the church is strong is that some can get too tied in to the politics and the power.  When these go, the church is still there, but some within may feel as though they have lost.  But we never lose…we still have the power of the Spirit and the Word of God.  The PCI (and indeed other churches) cannot campaign or \evangelise’ in order to preserve a Christendom, which even in Northern Ireland, is going.  In terms of the Gospel it doesn’t really matter if there is an Irish language act or not – we can proclaim the gospel in any language and any culture.   The enemy of the church is not Sinn Fein or indeed any group of human beings.  Our battle is not against flesh and blood.  The enemy within is far greater than perceived enemies out with.

5.  The PCI and the Free Church of Scotland are natural allies

Let me rephrase that slightly.  Those in the PCI who are confessional biblical Christians are our brothers and sisters in Christ – in doctrine, worship and government.  We have also many things similar in culture (the Ulster Scots are closer to us in culture than our brothers and sisters in the Home Counties – much as we love them!) – although there are differences (we regard Gaelic as the language of heaven!) and we face the same battles in the culture.  We can help one another.  Those in the PCI who think that they need to become more liberal in theology are not our allies, but then they are not the allies of their own church either!  Those in the Free Church who think that we can only ally with the purest of the pure who sing only psalms, are living in a different world – a world which has largely gone.

Its time for both churches to get their acts together and to work together.

One thing that interested me was when I was told that the PCI really did not do youth camps – they would have clubs, and mission weeks -but not camps.  Given that for us in the Free Church our camps have been one of the best evangelistic and discipleship things we have ever done perhaps we can help one another on this?

And finally a lesson from the Giants causeway

I have a confession to make.  I went to visit the Giants Causeway – how could I not?  It is after all a World Heritage Site.  And I found it disappointing.

The actual Causeway pillars were interesting but not as special as I had heard.  The surround cliffs were fabulous….they reminded me of some I grew up with in the Scottish Highlands. But I think what got me about the Causeway was the way that it has been commercialised so that the Japanese, Chinese and other tourists who are bussed up from their cruise ships in Belfast and Dublin, can be fleeced out of their money.   Paying £10.50 to park the car and then to be herded through a shop/commercial centre, before walking down to see the wonders of nature, really went against the grain.   If that was what it was like in winter, I would hate to visit in summer!

To me there is a lesson for us in the Church.  We don’t need to spruce up, try to improve, or make money out of what God has done and God has given.  The Church is not a tourist attraction, a place to make money,  or a place where curious bystanders can pop in and take pictures before heading home having ‘done church’.  We are a living body, a holy people, a real community – open for all and proclaiming the Gospel to all.   Artificial churches are like artificial tourist attractions – they detract from the glory of what they are supposed to be glorifying.

May the Lord send real renewal and revival on Northern and indeed the whole of Ireland.   And may he continue to send St Peters many wonderful Irish students!