Many moons ago I led a school strike.   The cause was just – I thought – we were protesting against the raising of the school-leaving age to 16!  I remember leading all 600 pupils in a walk out in front of the school.  As the headteacher, Mr Smith, approached me, I noticed that the pupils behind me and my friend had gone strangely quiet.  “What are you doing David?”. “We’re on strike sir!  Protesting against the unfair raising of the school leaving age”.  “You…and whose army”.  “all of the pupils sir”.  “Have a look behind you, David”.  I turned round and there was no one there – my fellow pupils had all scarpered!  I got the belt and learned my lesson that sometimes children engaging in political action can be quite fickle!

I was reminded of that this past week with the so-called children’s strikes against Climate change.  Unlike my wee escapade where support was drummed up by marching past the classrooms, this one came about as a result of online activism.  Pupils not only in the UK, but in Europe and Australia have got involved in what seems to have been quite an orchestrated event.  Here for examples are some Australians joining in:

In some ways this can be seen as something positive – to be celebrated, rather than denigrated.  Is it not good to see children and young people politically engaged and actively involved?  Personally I think it is excellent and to be encouraged.  What harm could one day of school do? Neil Mackay writing in The Herald was typical of many commentators:

But there is hope, and it lies with the young, with Generation Z, kids now in their mid to late teens. They are not slaves to short-termism like their parents and grandparents – these young people think long-term. Just look at the school strikes over climate change that are popping up like partisan units across the nation. These young people have read, they’ve thought and they’ve come to a conclusion about the long-term welfare of our planet – the biggest and most complex question facing humanity –and they’re prepared to personally rattle the cages of the old guard to achieve the change they want. I cannot wait for a future when I can vote these young Gen Z-ers into power and hope that unlike the generations before them they put the Age of Stupid to the sword. 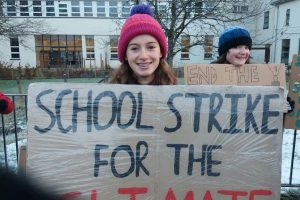 Nicola Sturgeon concurred, stating that  they “give us a cause for optimism in a dark world” https://www.eveningtelegraph.co.uk/2019/02/15/nicola-sturgeon-praises-pupils-on-climate-change-strike/?sso-c=MC41MzQ4MTMwMCAxNTUwNTc0Njgx

Cause for hope?   I felt a Whitney Houston song coming on!

There is another side to this.   When I saw the video below it chilled my bones.  This was posted by an activist who thought that school pupils marching through the streets of Brighton and chanting ‘F….Theresa May’ was somehow indicative of a future hope.

The schools must be empty! Over 800 kids out of class for the Brighon #ClimateStrike pic.twitter.com/5IDhQxOXpX

This was not spontaneous protest by concerned children.  This is mob rule and hysteria whipped up by social media.   This was not children rebelling against their teachers and the establishment – this was children conforming to their teachers and establishment.  The national union of headteachers commended the ‘strikes’, most politicians did, as did much of the media.  It’s a weird kind of rebellion that is endorsed by those in authority!  If you doubt that – just think about what would happen to any child who went on strike to protest about children being killed in the womb, or in favour or Brexit or against Transgender indoctrination.   Would Sturgeon and the politicians be tweeting their admiration for their political activity?   If children ever dared question the current cultural zeitgeist they would be dealt with through the full force of the law (probably citing ‘hate crime’)! ..

I should add here that I think the children are right to be concerned about climate change and the planet.  However they are in danger of falling into the trap of just blameshifting.  ‘It’s the government’s fault’.   But the reality is that climate change involves all of us.  When Wilberforce campaigned against slavery – those who joined in – including children – agreed to give up sugar.  I will take these children a whole lot more seriously when they stop asking their parents to act as taxi drivers (honestly mum, we’ll walk to school!), cut down on mobile phones and ensure they eat only locally sourced produce!  That would be radical…!

Although I would not go as far as the German chancellor Angela Merkel who seemed to think it was all the fault of the Russians!  Strange how none of the usual suspects started screaming about ‘outside’ interference in our politics. 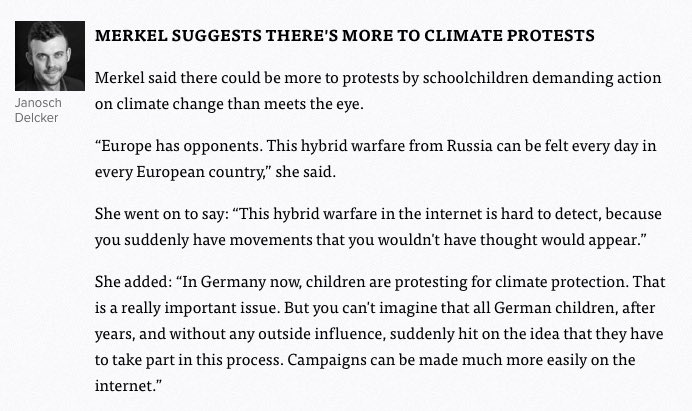 Along with mob rule you need the mass indoctrination.  With the advent of the internet and the dumbing down of our education system which is now generally used for social engineering and teaching children what to think, not how to think – the scope for indoctrination on an Orwellian scale is greater than ever.

The political elites want to ensure that all children, not just their own,  are indoctrinated into their doctrines.  I came across two chilling indicators of this.  .  Gerry Hassan, an influential Scottish commentator has argued for private schools to be closed.  I suspect that there will also be moves to have home schooling removed.  Tie this in with TIE (Time for Inclusive Education) which in theory is about preventing bullying and making every child feel safe, supported and included (who could argue against that?!) but in reality is about imposing Queer theory philosophy upon every child in Scotland.   In terms of the poster above the reality is that many children (ie. those who grow up in Christian, Islamic or even atheist homes with a different perspective on human sexuality) will not feel safe, supported and included at school.

If you doubt that TIE is about indoctrination then here is something else that our children are being subjected to.  A serving political leader is being held up as an Icon to our children.  The fact that he is also the Green Leader is a bonus.   We are not too far away from our school children being taught about our Great Glorious Leaders, who must be worshipped as Icons! 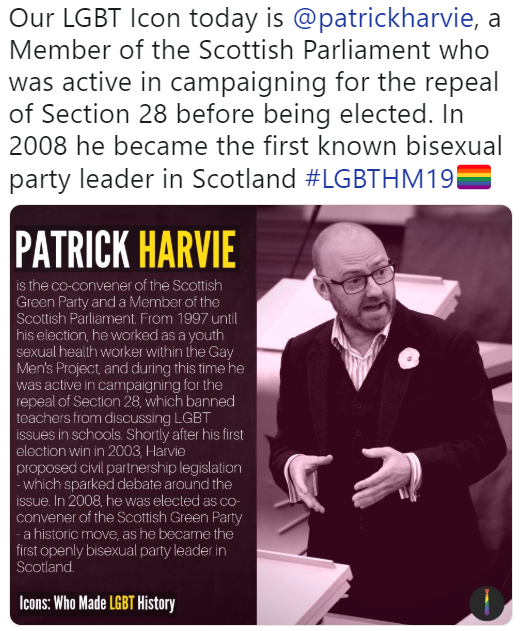 Chairman Mao realised the potential of having malleable mass student social protest movements in 1966 and 1967.  His cultural revolution is a warning to us.   The manipulation of children in order to further a government agenda is something to regret not rejoice over.  I think our society is developing the conditions that make this much more possible.   We treat adults like children and children like adults.   We want children to be able to vote because we think that we can tell them how to vote.  We teach them what to think not how to think.   We have the media that is able not only to influence but also to spy upon their every move.  Our police and governments now think they can police people’s thoughts.  We are all school children to be indoctrinated, manipulated and if that fails, cowed into submission.  If you doubt the intimdatory potential of this – consider this message as indicative of what the mob means:

And of course we have the doctrines of hate – hate speech, hate thoughts, hate actions.  If you don’t agree with the new doctrines you are guilty of hate.  Orwell saw it coming.  The Twitter mob leads to the real mob.

10 I have seen the burden God has laid on the human race. 11 He has made everything beautiful in its time. He has also set eternity in the human heart; yet no one can fathom what God has done from beginning to end. 12 I know that there is nothing better for people than to be happy and to do good while they live. 13 That each of them may eat and drink, and find satisfaction in all their toil—this is the gift of God. 14 I know that everything God does will endure forever; nothing can be added to it and nothing taken from it. God does it so that people will fear him.

The fear of the Lord is the beginning of wisdom.

Let the little children come to me…

There IS hope.  But it is not in mob hysteria or any of the current ideologies of our rulers.  Hope is found in Christ.

Instead of teaching our children that they are the saviours of the world, we should be introducing them to the Saviour of the world!