If the Israel Folau incident gives us an insight into how our ‘liberal’ elites seek to bully Christians into accepting their doctrines, then what has been happening back home in Scotland to the Church of Scotland minister Mike Goss gives another.

The following appeared in The Courier this week: 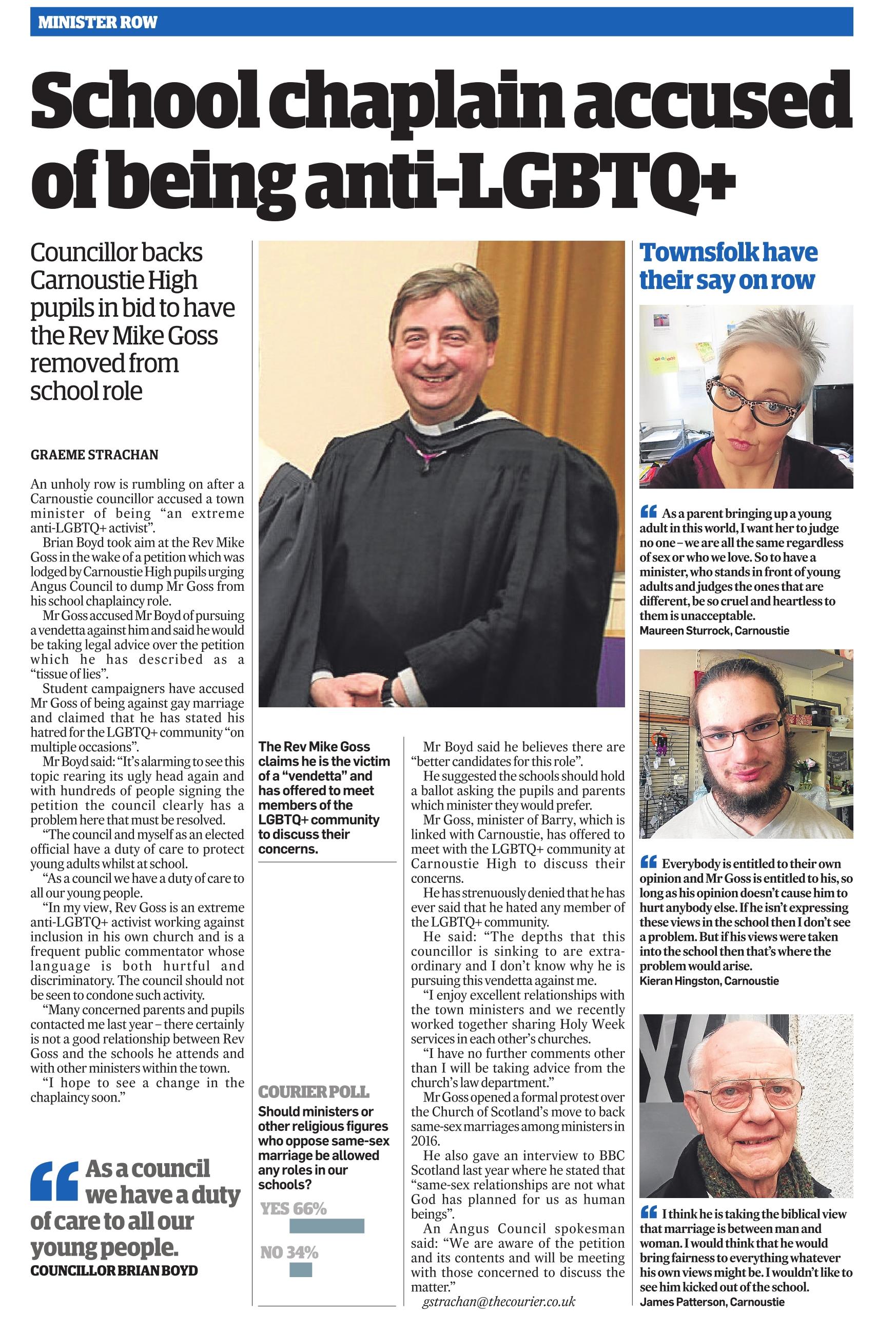 The Courier has now carried this story for three days, and it has been picked up by other national newspapers.   The standard narrative is that of homophobic minister being challenged to resign by hundreds of brave pupils.   But the facts (such inconvenient things when you are trying to run a hate campaign!) are very different.

The campaign is based on lies.  Indeed the petition itself is libellous.  They cannot give one example of Mike having made a hateful statement or discriminated or said anything against any LGBTQI (don’t forget the +) pupil.  Not unless they consider having a different opinion about SSM as ‘hateful’.  To be fair, they probably do.  The depth of intolerance, ignorance and stupidity that is being fed into our children means that doubtless some think that to disagree with someone is to hate them.

Contrary to what the TIE (Time for Inclusive Education – an Orwellian title if ever there was – because what they want, as this campaign indicates is an exclusive education, excluding everyone who does not conform to their view) organisation stated in The Herald  – this is not Scotland’s pupils making their voice known.  It is a tiny minority of activists.

Councillor Boyd who joined in the witch hunt is also a disgrace.  He lied about Mike being an ‘extremist anti-LGBTQI (don’t forget the +) ‘ and that other ministers in the town were opposed to Rev. Goss.  So far the only one who has spoken out is John Toller, the Baptist minister, who gave strong support. (update – see the note below).   I also don’t believe that ‘many parents’ contacted the councillor about Mike Goss.

As for the petition itself the comment was made that ‘hundreds’ have signed it.  900 to be precise.  Which sounds a lot except that the petition is an online petition on change.org and is open to be signed by anyone in the world.  In internet terms 900 signatures on a petition that has been widely publicised in the secular media is nothing.  I wonder how many are actually Carnoustie pupils (when I last looked at the petition before all the publicity it was 56 people in total who had signed).  But you see how this is spun.  The media and TIE tell us that this is Scotland’s pupils taking ‘direct action’ and then say that hundreds have signed the petition – but the vast majority have nothing to do with the school, are not pupils and may not even have anything to do with Scotland.  But the impression remains…

I wrote the above letter which was published as the main letter in The Courier.   It is basically the same one I wrote to The Herald – which as far as I aware has not been published – and I doubt it will.

There are many disturbing things about this story.    The fact that a hard-working, compassionate and caring minister is being attacked and bullied in this way is bad enough.   That he is being attacked with such blatant libellous lies is even worse.  That the press are running so scared of being accused of homophobia (the unforgivable secular sin) that they dare not point this out is a step further.  But perhaps most chilling is the way that TIE and the gay activists are prepared to use children to enforce their doctrine.  It is reminiscent of the way that Mao created the Little Red Guards, in order to ensure that all of society conformed to his dictate.   This Maoist doctrine is precisely what is happening in Scotland today – and few politicians, journalists or teachers are prepared to challenge it.

The hypocrisy from the politicians, media and academia is appalling.  Are they demanding that Catholic chaplains should be removed because they are opposed to SSM?  What about Muslims who are also opposed to SSM?  Should they be removed from public posts or would that be Islamaphobia? (the third great sin of the secular liberals – the second is of course, transphobia).

When SSM was passed (in the name of tolerance) we warned that one of the consequences would be the marginalisation and demonisation of those who upheld the traditional Christian position – and of course, we were mocked and abused as extremists for suggesting such a ridiculous idea.  Now that we have vigilante groups of pupils attacking their school chaplain in the media (who quietly acquiesce in this bullying) apparently the real extremists are, according to a local politician,  are those who  are opposed to SSM; a sin which makes you unworthy of public office.   And thus in one quick leap we have moved as a society from tolerating difference to equating those who oppose SSM with ISIS!  (One can only hope that the good people of Carnoustie have the sense at the next election to get rid of a councillor who can spout such intolerant, irrational nonsense).

But what about the Church?  Here is an opportunity for the Church of Scotland to stand up for freedom of speech, liberty of religion and  to support one of its own ministers.  But not a word.   Nothing on their webpage, nothing on their social media and nothing to the press – (unless of course you know better).  It has been left to the Free Church and Baptist ministers to offer public support.  That tells you a great deal about the Church of Scotland.   It’s a spineless, gutless, Godless organisation, which signals its virtue all over its own media, but cannot even have the gumption or courage to stand up for one of its ministers who is being pilloried in the press for holding a position which, until last year, was their official position.  According to the C of S and their ‘diverse economy’ C of S ministers are still permitted to hold to the traditional Christian position on marriage (how generous!).  They can, but woe betide any C of S minister who dares to hold to that position in public.  They will be thrown to the Little Pink Guards.

I have to declare a personal interest here.  I regard Mike Goss as a friend (yes – I do still have friends in the Church of Scotland!).  He is also a member of the SolasCPC board.  I know him well.  He is just about the last person I would expect to utter a ‘hate filled’ comment.   It’s why this charge is so ridiculous and unbelievable.  But the fact that it is false news and an attempt to smear does not seem to matter.

I also speak out because I know they will come for me too.  Already there have been a couple of pathetic attempts to have me removed as a chaplain at the University of Dundee and I dare not reveal in public which schools I am involved in (how sad that ‘tolerant, liberal Scotland has been reduced to this).  Because of the internet there are vigilante groups who see it as their life mission to cleanse the world of anyone who does not accept their agenda.  Most people can’t be bothered with the hassle and so just give them what they want.  I’m so thankful that Mike (like Israel Folau) has not caved in and is prepared to stand up for what he (and millions of others) believe.  Lord, have mercy!

Update:  For the fourth day in a row this story has appeared in the Courier.  And it confirms that Councillor Boyd was lying to the press when he stated that Mike Goss did not have a good relationship with other ministers in the area – it turns out that another two of them have contacted the press to say that this was not true.  Councillor Boyd is upset that they have done so and so he now accuses them of ‘banding together’ (thereby making a mockery of his earlier claim that they were not banded together!)…and even states to one “I find your preaching to me, copying in the press, simply unacceptable”  – says the man who attacked (preached) at Mike Goss and went to the Press with calls for his dismissal.  It seems the bully councillor can’t cope with people disagreeing with him!