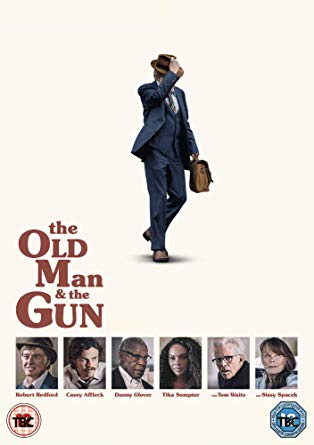 We hadn’t been to the DCA for a while so it was pleasant to return and see this excellent film – Robert Redford’s last.  He is a fine actor and none more so than in this tale of an elderly bankrobber, Forrest Tucker.  For me he was outshone by Sissy Spacek who brought a life and depth to her character (as his wife) which was beautiful.  Redford made his name with Paul Newman almost 50 years ago with The Sting so I suppose this criminal caper was a fitting way to bow out.

Director David Lowry shot the film on 16mm with a kind of grainy texture, which together with the music makes it feel from an other era.  Overall it is a classy film, with great acting, a predictable story line, great music and some fine cinematography.  Well worth going to see.  However….

I have some reservations.  The fact that I found the film amusing, entertaining and left like I suspect most of the audience with a degree of sympathy even admiration for Tucker (this film is based on a true story) disturbs me.  So I went and read The Old Man and the Gun – and Other Tales of True Crime by David Grann.   The film romanticised the life of a criminal who stole other people’s money, threatened some with a gun and was an atrocious father and husband.   The chapter in the book gives a much more realistic picture.

Tucker wanted to be famous.  He wanted a film to be made about him.  He even wrote a book/film manuscript which he sent to Clint Eastwood (who didn’t reply).  In 1999 after spending some years out of jail and with an apparently happy marriage he went and robbed another bank.

“He didn’t do it for the money,” his wife said. “We had a new car, nice home paid for, beautiful clothes. He had everything.” “I think he wanted to become a legend, like Bonnie and Clyde,” said Captain Chinn, who apprehended him after what was believed to be his fourth recent robbery in the Florida area. A court psychologist who examined Tucker noted, “I have seen many individuals who are self-aggrandizing, and that would like to make their mark in history . . . but none, I must admit, that I heard that would want to, other than in the movies, go out in a blaze in a bank robbery. It is beyond the realm of psychological prediction.”

Grann points out that American culture has romanticised the ‘outlaw  and that it was this myth that Tucker was following:

“The outlaw, in the American imagination, is a subject of romance—a “good” bad man, he is typically a master of escape, a crack shot, a ladies’ man. In 1915, when the police asked the train robber Frank Ryan why he did it, he replied, “Bad companions and dime novels. Jesse James was my favorite hero.””

“He made his way to California, where he went on a spree of robberies, hurtling over counters, pointing his gun, and declaring, “I mean business!” He wore bright checkered suits and sped away in a flamboyant getaway car with tubes along the sides. He even talked like a character in pulp fiction. “This is a stickup, girls,” he once said, according to witnesses. “I’ve got a gun. Be quiet and you won’t get hurt.”

Some tried to say that it was the prison system that made Tucker into a criminal.  I think it is just as likely that the myths of Hollywood guided his career.  In this sense The Old Man and the Gun just perpetuates the Hollywood myth of the nice outlaw.  In a moral society people will be able to look and see beneath the romantic image.  In an amoral society where ‘right and wrong’ are reduced to personal feelings or societal norms – then when a bank robber is portrayed as a cuddly heroic character, we should not be surprised when some people, seeking a meaning for their own lives, follow that lead.

That is certainly what Tucker did.  The film is beautifully good and good fun, but in the end inaccurate and potentially harmful.  An accurate film would have portrayed Tucker as seeing himself not as a bank robber but rather an escapologist.  It would have shown the way that he lied to and betrayed his three wives and his children.  Above all, instead of the romantic ending of the bankrobber returning to his genetically/societally determined role in life it would have shown his regrets at a wasted and useless life.

““Everyone says I’m smart,” Tucker said to me. “But I’m not smart in the ways of life or I wouldn’t have done the things I did.” After a brief flurry of attention following his arrest, he had been all but forgotten. “When I die, no one will remember me,” he said. His voice was almost a whisper. “I wish I had a real profession, something like the music business. I regret not being able to work steady and support my family. I have other regrets, too, but that’s as much as one man can stand. Late at night, you lie in your bunk in prison and you think about what you lost, what you were,”

Three Billboards Outside Ebbing Missouri – A Brilliant Film. I Hated It!