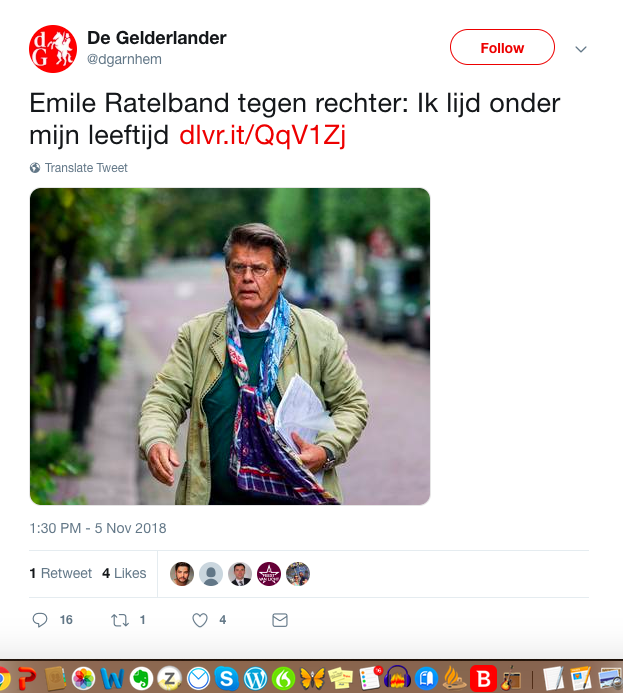 I have great news for you.  Many of you have been under the false impression that I am a 56 year old Scottish minister with not much hair.  This is just not true and I feel I should sue you for hate crime.   I am in fact 36 with a full head of hair and I would like to identify as Chinese.    I know you think this is a joke – but in a world where we can identify as whatever we want – in a world where a man who is born with XY chromosomes, has male genitalia and a male body can simply say he is a woman – against all the evidence (according to the UK and Scottish Governments)…why shouldn’t someone be allowed to identify as whatever age they like?

We’ve had people who want to identify as animals, or a different race so why not a different age?   Step up Emile Ratelband who is suing a Dutch court to be allowed to do precisely that.  According to the BBC report:

A Dutch “positivity trainer” has launched a legal battle to change his age and boost his dating prospects.

Emile Ratelband, 69, wants to shift his birthday from 11 March 1949 to 11 March 1969, comparing the change to identifying as being transgender.

“We live in a time when you can change your name and change your gender. Why can’t I decide my own age?” he said.

A local court in the eastern city of Arnhem is expected to rule on the case within four weeks.

Mr Ratelband further argued that according to his doctors he has the body of a 45-year-old, and described himself as a “young god”.

He went on Facebook last year to describe how he had made the decision one day standing in front of a mirror, not because he feared getting old but because he wanted to make the most of life for as long as possible.

He also said he would renounce his pension if he switched his birth date.

Mr Ratelband, a media personality and motivational guru, converted to Buddhism earlier this year and is a trainer in neurolinguistic programming.

In the Second World War Arnhem was a bridge too far…..will this be a self-identity too far for our politicians and cultural elites?   How will they answer Mr Ratelband?