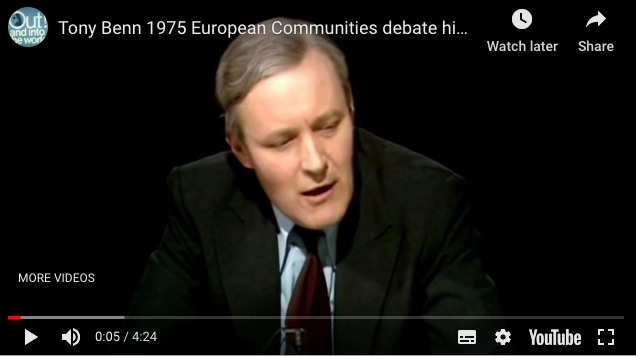 The Great Deception – Part 5 – “The First Government of Europe”

Each week we take a brief look at what has happened in the week and post some of the best articles on the subject – before continuing with our review of The Great Deception).

Another week of chaos, rumours and threats.  The French suggesting they could block Calais, the Brits suggesting that EU planes could not fly over UK airspace and the Irish threatening civil war….(don’t forget the collapse of the NHS, an increase in STDs and the end of the world)…

This article from Larry Elliott is one of the best I have read on the issue.  Unusual in that it is from someone in The Guardian which is vehemently pro-EU.   And this from Peter Ramsay, another Left winger,  is even more surprising because it comes from the LSE – an even more fanatically pro_EU institution.

And this article warns that the EU will keep us aligned with its tax policies – mainly because they fear Britain being more competitive.  Its why I still think that in reality we will end up with BINO – Brexit in name only.

The big event in the Brexit saga this past week was the self-styled People’s March where 650,000 people marched through London.  It was strange to watch mainly the British Middle class marching through London waving the flags of a foreign power and demanding that we be subjugated to it!  Whilst there are those who can make an intelligent and articulate case for being in the EU – there is also as much ignorance on the Remain side as there is on the Leave.

One aspect of this whole debate that disturbs me even more is the way that the young are being weaponised.  It’s not just the ‘you old folk are going to die, its our future’ mantra (as though leaving the EU was self-evident harming), but rather the way that both students and children are being indoctrinated.  After my remarks that Universities were being used for this purpose one lecturer wrote me to say that my comments were spot on and that courses in their university were being resigned to show that European integration was always a reality.

This indoctrination begins at a very young age!

Community is not a coal and steel producers Association it is the beginning of Europe” Jean Monnet.

I found this to be a fascinating chapter because it helped explain how the EU works today and the principles on which it was founded.  It concerns the establishment of the Common Market (what we now know as the Single Market and the Customs Union – these are in effect the EU – when our politicians say they we can be out of the EU but in the SM and CU they are at the very least being ‘economical with the truth’.).

Salter in 1930 had proposed that the government of a United States of Europe should be made up of a secretariat with supranational powers; a council of ministers representing national governments; an assembly representing national parliament; and a court of justice.  This is in effect the structure of the EU today.  It also gives the lie to the notion that the EU arose out of the Second World War rather than a failed project of the 1930s.

Monnet made it clear that the autonomy of his high authority would mean ‘ the surrender of national sovereignty over a wide strategic and economic field’.  Again this gives the lie to those of our politicians who say that the UK (or Scotland) retains sovereignty within the EU.  From the beginning the EU was designed not to be a collective of sovereign national states, but a supranational body in which national sovereignty was to all intents and purposes removed.

The British saw this for what it was one diplomat said “the idea that there should be a body with real authority over the decisions of national governments was something we felt was grotesque and absurd”.

The first attempt to set up this European state was through defence. Because of the Korean War Monnet  decided to set up a European defence community. – EDC in the 1950’s. This would mean German re armament. Which the Americans wanted. Meanwhile the British had had an election and Churchill took over from Labour. He wanted Britain to remain aloof from direct European involvement (again this gives the lie to people like the actor Brian Cox who declared that because Churchill was pro-EU we should support the EU as well – what he either didn’t know or forgot to mention was that Churchill was pro-EU for the French and the Germans, but not for the British!).   The British refused to get involved in this new European army. However the British promised to act in defence of all European nations. Including Germany. The Americans however were still keen on a European defence force.

There was significant opposition to this from the French Socialists. Meanwhile Monnet’s ally Spaak proposed setting up a European political community along with the coal and steel and the defence communities.   This all began to unravel especially because of opposition from the French including De Gaulle.

With an EDC and EPC it looked as though Europe was well on the way to Monnet’s dream of a European State.  But events (and the French intervened) . The French involement in Vietnam wasn’t going well. Spaak appealed to Mendes-France, a radical nationalist – “we must, must make Europe. The military side isn’t everything. What matters is the integration of Europe. EDC is only the first step in that direction, but if there is no EDC, then everything falls to the ground.” Nevertheless the French voted against and both the EDC and the EPC was dead.

But the project was not over. From now on the method to be used was deceit.  And this has been the modus operandi of the EEC/EU ever since.  Take these classic examples from the current President Jean-Claude Juncker

On refusing to tell European people the whole truth:
“Of course there will be transfers of sovereignty. But would I be intelligent to draw the attention of public opinion to this fact?”
On not telling the media everything about the stringent economic measures the EU imposed on Greece:
“When it becomes serious, you have to lie.”
On the importance of doing politics in secret:
“I’m ready to be insulted as being insufficiently democratic… I am for [having] secret, dark debates.”
On the problem of “national opinion”:
“Some of our colleagues in the European Council are listening exclusively to their national opinion. And if you are listening to your national opinion, you are not developing what should be common European sense.”

This was seen in a change that occurred in 1965 with the so-called Merger Treaty.  Note this not so subtle change in the wording – “The members of the high authority… Shall refrain from any action incompatible with the supranational character of their duties.” Would be replaced by “the members of the commission… Shall refrain from any action incompatible with their duties…”  The whole supranational aspect would remain, but would just be covered up.

Deceit and economics were now to be the chief weapons for forging this European integration.  From now on Monnet decided to build his Europe through the progressive integration of other economic sectors – including the European Atomic Agency – Eurotom.  A 1955 the idea of a common market was first mooted. Duties levied on goods traded between member states would be progressively reduced, then abolished, while a common external tariff wall would be erected against nonmembers.   The notion of a United States of Europe dropped was in favour of the term “economic community” .

“Thus did the central deception of the whole story become established. From now on, the real agenda, political integration, was to be deliberately concealed under the guise of economic integration. Building Europe was to be presented as a matter of trade and jobs.”

In 1956 the idea of a common agricultural policy was set out. The French insisted on this. Farming based on peasant smallholdings accounted for 1/4 of France’s workforce.  The small farmers were  overrepresented in Parliament. So a common agricultural policy which supported them was essential. The French still did not want the common market. And they knew how to stop it. They would just make demands that they knew to be unacceptable. (plus ca change, plus c’est la meme chose!).

Again events intervened. The disaster of Suez changed everything. Because of the shortage of Middle East oil it became essential to have an alternative source of energy in this case Eurotom- atomic energy. Some progress was quickly made towards a common market. On 25 March 1957 in Rome the treaty was accepted setting up the European economic community. To “lay the foundations of an ever closer union among the peoples of Europe” . It would have a new European commission which will be an executive rather than a civil service and which alone would have the right to initiate legislation. It was to have a council of ministers representing the governments of the member states, an assembly made up of delegates from their national parliaments; and the European Court of Justice.  This is the structure of the EU today.

“France must not be the victim of the treaty. A Democrat may abdicate by giving into an internal dictatorship, but also by delegating his powers to an external authority.”

The ‘People’s March’ was not a march for democracy.  It was not a march for the people’s sovereignty.  It was a march largely by the middle classes who benefit most from the EU, seeking to prevent democracy actually happening (it was nothing to do with having a second vote and everything to do with stopping Brexit and making sure we never get the opportunity to vote again),  and seeking to ensure that sovereignty is removed from the UK parliament and people and given over to an unelected and largely unaccountable outside body.  As Rabbi Burns said “such a parcel of rogues in a nation”…