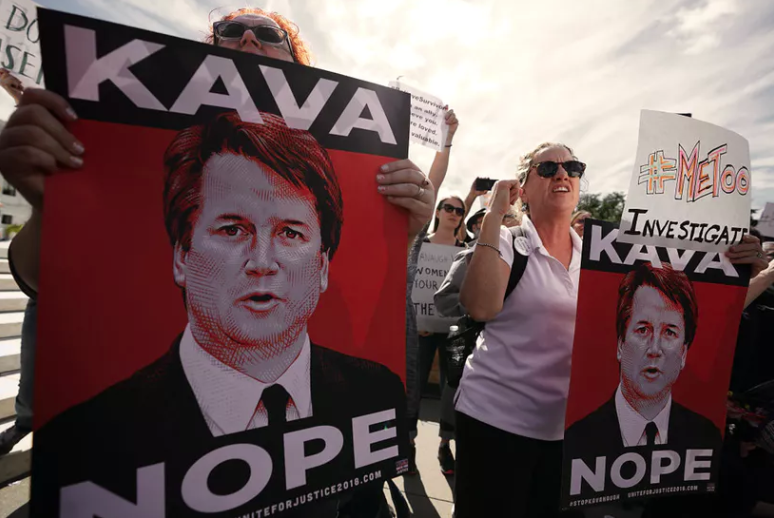 My original piece on the Brett Kavanaugh fiasco, (America’s Disgrace) really stirred up the cesspit – as if it needed any stirring. (although to be fair a number of people also expressed appreciation).   Ironically the reaction to it kind of proves the points I was trying to make – the main one is simply that we don’t know what happened 35 years ago – and anyone who claims to do so, does so largely on their own feelings and politics.  Nonetheless that has not stopped numerous people writing and saying that they know what is happening.  I have been astounded at how many Christians (who should know that they are not the judges) are proclaiming “I believe her”, “I believe him” – as though what we “believe” has anything to say on the matter!

But as events continue to unfold it becomes clear that the mess that the US is in is far deeper than this particular sideshow.   One of the wider things that got some people especially upset was the claim that the farce currently being played out in Washington somehow indicates the decline of American civilization because of its growing rejection of its Christian roots.  Leaving aside the argument about whether America has Christian roots (that is incontrovertible but in this post- modern, post-truth world people can just make up history to suit their own prejudices and always find someone on the Internet who will agree with them!); and the upset that some people feel ‘ how dare you say that about America – your country is worse ‘- (it is, but this is not a competition!); the question remains – how does this case show what is going wrong in the wider society. I

I would add that where the US goes – we quickly follow (or maybe it is the other way round?).  These same signs of decay are already endemic in our culture.

2. Abortion is a human right that must be defended at all costs –  This fascinating article from my friend and fellow Presbyterian minister in the Australian Spectator, has some important information on this.

Kavanaugh accuser Christine Blasey Ford, who claims — without any evidence — that Kavanaugh inappropriately touched her at a drunken party while in high school, turns out to have ties to an abortion pill pharmaceutical company called Corcept Therapeutics. This discovery brings to light an obvious conflict of interest in Blasey’s story, revealing that she works for a pharmaceutical company that manufacturers an abortion pill drug, whose profits could be strongly impacted by future Supreme Court decisions on abortion rights.

Corcept Therapeutics (Corcept.com) manufactures and markets an abortion pill drug called mifepristone, and Christine Blasey Ford is a co-author of at least eight published scientific papers produced by the pharmaceutical giant to promote its pills. You can see Blasey’s name listed on several publications at this Corcept.com web page detailing their research papers.

The woman who accosted Senator Flake and was being hailed as a hero, is Ana Maria Archila, a director of another pro-abortion lobby group (also incidentally part funded by Soros) the CPD.  This group have been leading the protests and campaign against Kavanaugh.  What seems to be the primary concern here – is not the issue of sexual abuse, but the issue of abortion.   It is part of the perversity of modern society that people scream and yell and are prepared to devote their lives to enabling babies in the womb to be killed.

3. Truth is Relative =  and based more upon what you feel – than what is true. The Scotsman ran an article entitled Injustice cries out at Kavanaugh hearing by Dani Garavelli.  It is typical of the hysteria surrounding this case.  At first I thought and hoped it was some kind of spoof, but apparently its real.   Ms Garavellis tells us that this is all about the patriarchy…in fact everything wrong in the world can be blamed on that.  Did you know that Brexit was caused by ‘male privilege’?     Men (especially white men) lie.  Women tell the truth.   Nobody seems to care what really happened.  Whatever they want to be the truth will become that truth (Kavanaugh is a serial predator, Ford is a serial liar).  Facts are irrelevant.  Especially those facts which don’t suit our narrative.

Incidentally one thing that came out in Garavelli’s article was a claim that Ford was ‘forced to publicly relive her ordeal’.  I read that and then remembered something from the hearing.   Ford testified that she was not offered a private hearing (the Senate were willing to fly to her).  She was.  Either she was lying under oath or her lawyers did not inform her of the offer.  They have apparently been reported for investigation…and so the show goes on.

4.  Tribalism is Endemic – Remember the good old days when Republican and Democrat just seemed to be two different shades of the same opinion?  Those days are long gone.  America is becoming a more divided society and seems to have forgotten the warning of Jesus that a house divided against itself will fall.   That is also seen on this side of the pond.  So I have had people say to me that if they don’t like a piece of news it can’t be correct and indeed must have come from an Alt-Right source.  The trouble is that the term Alt-Right has now just become code for ‘everyone who disagrees with me’.  On the other side there are those who refer to the Liberal mainstream media with the same dismissive contempt.  Nothing published in the New  York Times or the Guardian could possibly be correct!    The media have largely brought this upon themselves because they have become so partizan.  Even the so-called ‘quality’ papers are unlikely to print anything which goes against their pre-conceived narrative.  It’s why we so often have to look at alternative sources – and hope we can filter out the gold from the dross.

5.  Hypocrisy Rules –   Senator Cory Booker’s interrogation of Kavanaugh’s alleged teenage abuse was widely praised.  It now turns out that he himself admitted sexually abusing someone when he was a student at Stamford University. 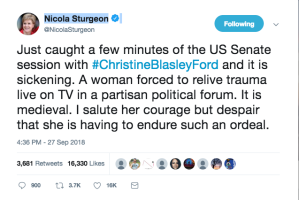 Again – despite only seeing a few minutes, that did not stop our FM buying immediately into the narrative that this is about the white patriarchy.  The woman should always be believed.  The hypocrisy is breathtaking.  She has not taken the same stance about her erstwhile mentor and colleague, Alex Salmond, who has also been accused of abuse – not when he was a teenager, but when he was in power. (note again – I am not saying that he did it, or didn’t…I apply the same standards to him as to Mr Kavanaugh – innocent until PROVEN guilty).    Did Ms Sturgeon immediately tweet that the women must be believed?  Did she salute their courage and despair that they would have to endure such an ordeal?

6.  The End of Civility means the End of Civilisation – This is one of the things that strikes me most about this ‘conversation’.  It’s abusive. It’s full of hatred.  Its irrational.  And it is incredibly bad-tempered and emotional.

“The important thing is that there is public outrage…that there is a larger political movement'”.  No the important thing is to find the truth.  Not what we believe according to our political beliefs – or gender.  If Kavanaugh had been found guilty and been let off – I could understand the reaction above..but this is people reacting to an accusation.  This is mob rule and mob justice. 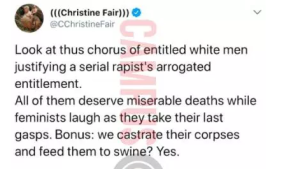 Another example of this kind of irrational rage and hatred (and you can find it amongst Trump supporters as well) is seen in this tweet from a Professor at Georgetown University,  Christine Fair.  She advocates killing the Republican Senators, castrating them and feeding them to the pigs.  I’m not sure how this does not meet the hate speech rules and how she stays in a job…but hey this is modern America.  And right now that is a hard reality to face.

A couple of other blogs that I have found helpful and interesting.

Cranmers take on this is superb –

As I write, I am listening to an activist on the radio seeking to end ‘a culture of women being treated as liars’. They are not. They are treated precisely as any other person within a system of law that tries to be blind to everything but the facts. This is why the divisive hashtags #IBelieveHim and #IBelieveHer are so toxic. Your or my emotional response to how an individual presents their narrative must never be wholly determinative. It is one of the first things they teach you at law school. Some people present a lie very well; some tell the truth very badly. The opinion of the mob is fickle and can be manipulated as anyone who has read the story of Holy Week will appreciate.

The Rebel Priest Julian Gomes also has an interesting perspective- 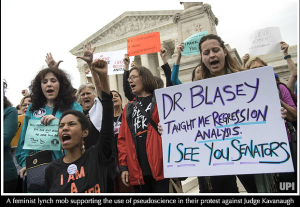 What we do know is that RMT psychobabble blended with feminist ideology is a toxic witches brew that is potent enough to destroy women and their fathers, brothers, husband and sons for years to come. It is a Kafkaesque substitute for justice, the presumption of innocence and the requirement for facts, evidence and corroboration in a court of law.

The whole thing is profoundly depressing and brings a real sense of despair.  But as a friend wrote me – who knows what the Lord may yet bring out of this?  Perhaps if Kavanaugh (a relatively moderate judge) is not appointed we might get someone who will help bring about the end of Roe v. Wade.  That would be a bigger and more wonderful event than the falling of the Berlin wall!

(After writing this I was pointed to this article from Effie Deans – brilliant!)

Let’s imagine I am scared that Jeremy Corbyn might become the next Prime Minister. Well what is to stop me searching for some woman who he went to school with or who he went on demonstrations with twenty, thirty or forty years ago. Eventually I might be able to discover one who is willing to say that in 1982 he groped her, or assaulted her or raped her. If only her testimony is enough to convict Mr Corbyn then my worries about him becoming Prime Minister are over. It isn’t even necessary that he should ever have met her. It’s only necessary that she says she did and that everyone believes her. Because women never ever lie.