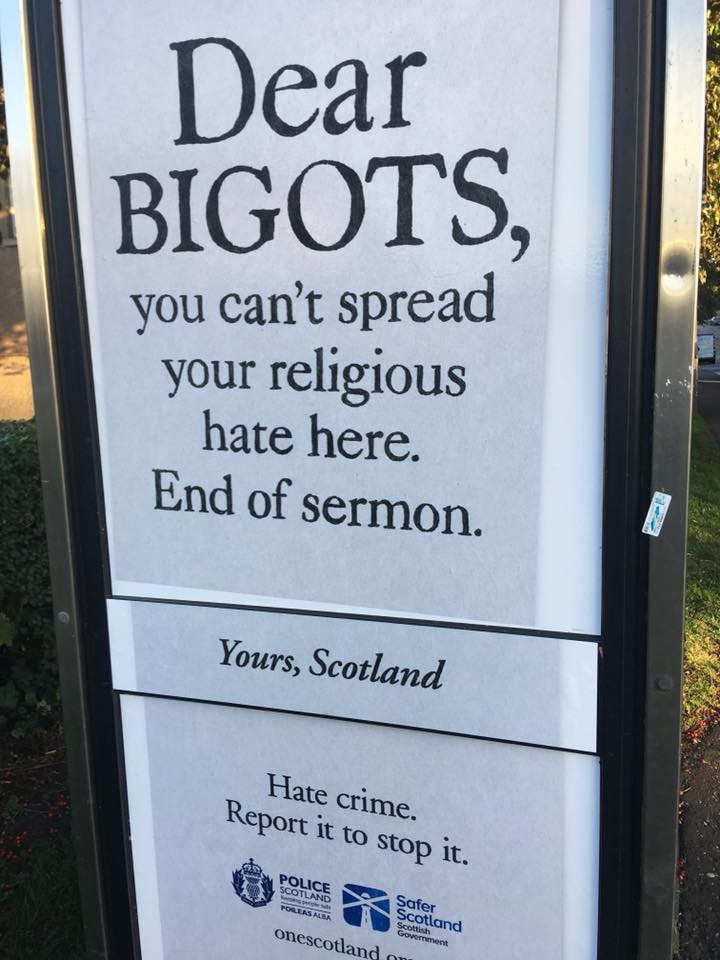 Cycling home from St Peters I saw a poster that took my breath away.  Sometimes you see that something is going to happen and yet it still shocks you when it does.  These posters are currently being displayed in towns and cities all over Scotland.

You will note that these are posters from the Scottish Government and the Scottish Police.   At one level they seem fine.  Who is going to argue against the idea that we want rid of hatred?  That people should not call others names, or be violent, or mock and abuse?   But that is not what is happening here.  Note the following:

The posters themselves are somewhat ambiguous, unless you speak the code.  If you do speak the language of the Scottish Government and Police then what they are saying is that any kind of disagreement with homosexuality, the trans philosophy, or Islam  makes you guilty of hate and you have no place in ‘our’ community.

They are selective – Its only certain groups that are mentioned.  Look at what they leave out.   What about those of us who are Christians who are regularly mocked and abused in the media, in our schools and on the streets?  What about English people in Scotland?  What about the disabled?  Or many, many other groups?  Why do they only pick on these select groups?

They are intimidatory – It is not the job of the police to police our thoughts and hearts.  They can have no idea what we do or do not hate or love.  Their responsibility is to deal with crimes that are committed. They do not have the time, money or ability to deal with our thoughts. But it seems they are going to try.  The new State morality is going to be imposed through education and enforced by the State police – welcome to modern Scotland – the Saudi Arabia of Secularism.

They are self-contradictory – A poster which is designed to combat hate – spreads hate.  Imagine a poster which said – Dear bigots, you can’t spread your homosexual hatred here!” .  You would be arrested immediately for putting that up.  But now the police and the Scottish government are putting up a poster which incites hatred – by implying that it is religion that is to blame.  I get enough hatred in schools, Universities, the media and online, without the government and police encouraging it!

If you doubt this is happening – take the case of the feminist activist Kelly-Jay Keen-Minshull who put up a poster with the following words“Woman, women, noun, adult human female.”  Dr Adrian Harrop, complained that it was transphobic and would make trans people feel ‘unsafe’.  So the company apologised, the poster was removed and the police are investigating.

Mr Harrop, 31, a GP registrar who lives with his husband in Sunderland, denied trying to silence anyone, saying he is not an activist. Asked why he found the meaning of the word “woman” so offensive, he said: “It really isn’t the dictionary definition itself, it’s the motivation behind it. That poster creates an environment of hostility for trans women and makes them frightened.”   He also said he was removing anyones free speech, whilst demanding that these posters be taken down!

Mrs Keen-Minshull, 44, said the poster’s removal was Orwellian. “I find it far more sinister and pernicious than the old-fashioned sexism where the guy at the garage is surprised I know anything about engines. I’d take that guy any day over the Twitter troll who thinks I don’t know what a woman is.

“If the word ‘woman’ can mean anything, then women lose their sex-based protections and nobody is protected. Women are getting really, really fed up. Every single organisation that capitulates, paves the way for the next one to do the same. This is what trans activists do. This is how they silence women. I hope this will help people wake up to what’s going on.”

As I walked past a couple of these posters today, I saw two policemen in front of me – I almost felt that I should be handing myself into them.  After all by their new standards I must be a criminal – I believe that its ok to call a woman a woman…and that a woman is an adult human female!  And my name appeared in the Daily Mail this week Daily Mail (Scotland) 28.09.18  in what could only be termed a ‘transphobic’ article….and I just recorded a programme with the BBC which will undoubtedly in future years, when the State trains its though police, be used as a classic example of transphobia.

This is where we are heading…