Please. Stop it.  Enough.   We get the message…over and over and over again.  We can hear you.  We know you are virtuous.   We know you are for equality and diversity.  So please, please, please, can we have some diversity in our corporate culture – and some equality?  Our corporate capitalists and public institutions seems obsessed with only one issue.   (I note the common complaint that people make – why are you/the church so obsessed with this issue?  The answer is that I am not.  I comment on what is happening in our society and the trends in our culture – and right now the fact is that our society seems to becoming even more transfixed with the issue of sexuality – look at the evidence below – just from the past week).

In this past week I note that Sheffield University are going for LGBT only halls- can you imagine the fuss if a University were to announce that it was setting up halls for hetrosexuals only?  But apparently some pigs are more equal than others.

The police of course are constantly signalling to us how they really care about the most important matters and how good they really are.   It’s always good to draw attention away from real crime, cuts in resources and evade criticism by ensuring that you signal your virtue on the only issue that really matters to contemporary progressives.

Schools of course cannot be left out.  They too must show how diverse and equal they are

Downfield Pupils at their Indoctrination Clas

(in the Orwellian sense of modern progressivism).  After all there are awards to be won in this race to the bottom.   Never mind the fact that 25% of children in Dundee are living in poverty, we can all be proud that Downfield Primary school was the first in Scotland to receive a ‘coveted’ (by whom?) LGBT charter award.   Who cares about the broken homes, the hungry children, the declining NHS, the increased death from drugs, the sexualisation of children through pornography on their mobile phones or the fact that one in five Scots pupils are not functionally literate – at least they can repeat all the right mantra’s about ‘being yourself’.

But the thing that has stood out most in this past week has been the way that the Corporates have been falling themselves in trying to outdo each other in proving how virtuous they really are.

Wagamama =  now have a rainbow on place mats.   And have a ‘rainbow bench’ – 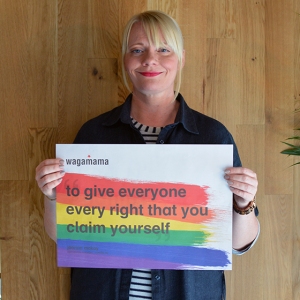 “at wagamama we pride ourselves on diversity, equality + freedom to be you and that’s why we support pride. #makeitrainbow is an initiative we set up in 2017 to show our support to the local london, brighton and manchester lgbt communities, donating profits from steamed bun sales whenever a rainbow was spotted that day.”

The AA joined in the fun –

“GLOW is a group of over 1,000 members that champion equality and inclusion in the workplace, ensuring all employees feel strong and supported in the company, no matter their background or personal preferences. This reflects Costa Coffee’s commitment as an employer that provides equal opportunities and inclusivity to give colleagues courage and pride in who they are. ”  (In passing I wonder if this applies to Christians….would Costa employees be allowed to wear crosses or Jesus loves you t-shirts…will Costa be giving out cups with Scripture verses on them?  If not – why not?)

And you can’t even by sweets without being accosted… 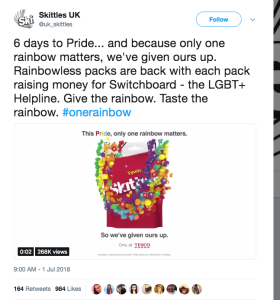 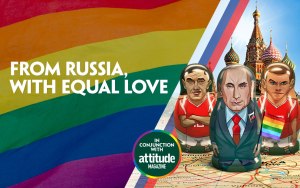 But the final straw for me is the world cup.  Paddy Power are offering £10,000 per goal that Russia score to LGBT charities. In case you are not convinced then Bruce/Caitlyn Jenner will enlighten you with zer profound wisdom…

I’m now a Russia fan! To find out why, check out my video below for @paddypower and then you can show support too via #RainbowRussians COME ON RUSSIA!” #ad For more information, check out: https://t.co/zEEHBeykFL pic.twitter.com/reGGbYRJxm

What will the LGBT charities do with all this money?  They will create more awards and propaganda to ensure that more money comes to them and that anyone who dares to question them is removed from polite society.

The churches of course in large measure just join in.  The Archbishop of Canterbury offered his own reward scheme to Vicky Beeching – An Open Letter to the Evangelical Church about Vicky Beeching and ‘Gay Christianity’

Meanwhile the Church of Scotland proudly boasts that its former moderator (the former evangelical, Angus Morrison) received an honorary doctorate for amongst other things “changing attitudes within the Church to same-sex relationships”.

And Steve Chalke continues to be proud of  his anti-Christian messages, tweeting this weekend. 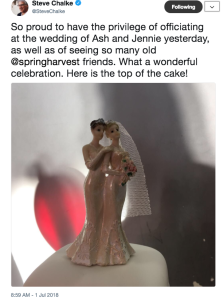 The Rainbow has become a symbol of our Regressive anti-Christian culture.  It is everywhere – Our national anthem should be changed to ”

Even Solas seems to have been bitten with the bug…

Except of course Solas was there first – a long time ago.  The sign of the rainbow is not a sign of the exclusive sexual progressive agenda – it is a sign of God’s covenant not to destroy the earth with a flood again.  It is a covenantal sign of a covenant keeping God.  We ain’t handing over a Christian sign to the Regressive anti-Christians.

But the rainbow does not mean that God will not let us destroy ourselves as a society.  When Paul in Romans 1 mentions shameful sexual practices (amongst a range of other sins) he does not say that this will result in the judgement of God ona society – he says it is the judgement of God. When we reject God then the greatest punishment for us is when he gives us what we want – a Godless life and society.  So in a perverse postmodern kind of way, our society has turned the symbol of God’s covenant mercy into a symbol of the judgement that God has given us over to – by just letting us ‘be ourselves’.  There can be no worse or destructive judgement for humanity.  Lord, have mercy.

Rom. 1:18    The wrath of God is being revealed from heaven against all the godlessness and wickedness of people, who suppress the truth by their wickedness, 19 since what may be known about God is plain to them, because God has made it plain to them. 20 For since the creation of the world God’s invisible qualities—his eternal power and divine nature—have been clearly seen, being understood from what has been made, so that people are without excuse.   For although they knew God, they neither glorified him as God nor gave thanks to him, but their thinking became futile and their foolish hearts were darkened. 22 Although they claimed to be wise, they became fools 23 and exchanged the glory of the immortal God for images made to look like a mortal human being and birds and animals and reptiles. Therefore God gave them over in the sinful desires of their hearts to sexual impurity for the degrading of their bodies with one another. 25 They exchanged the truth about God for a lie, and worshiped and served created things rather than the Creator—who is forever praised. Amen.

PS.  For what its worth – my own small ‘rage against the machine’ is that I have ripped up my Costa card.  They and Wagamamas, the AA and Skittles have joined Paddy Power and the C of S in no longer being recipients of my meagre resources!

PPS.  Just after posting this one of you readers asked me about the Scottish Parliament….of course.  I apologise.  How could I forget that organisation which is always in the Premier League of Virtue Signallers?   So here are our brave MSPs, boldly wearing their rainbow ties…(strangely I have no recollection of them making such bold displays when welcoming the Chinese….but maybe my memory is defective?)..