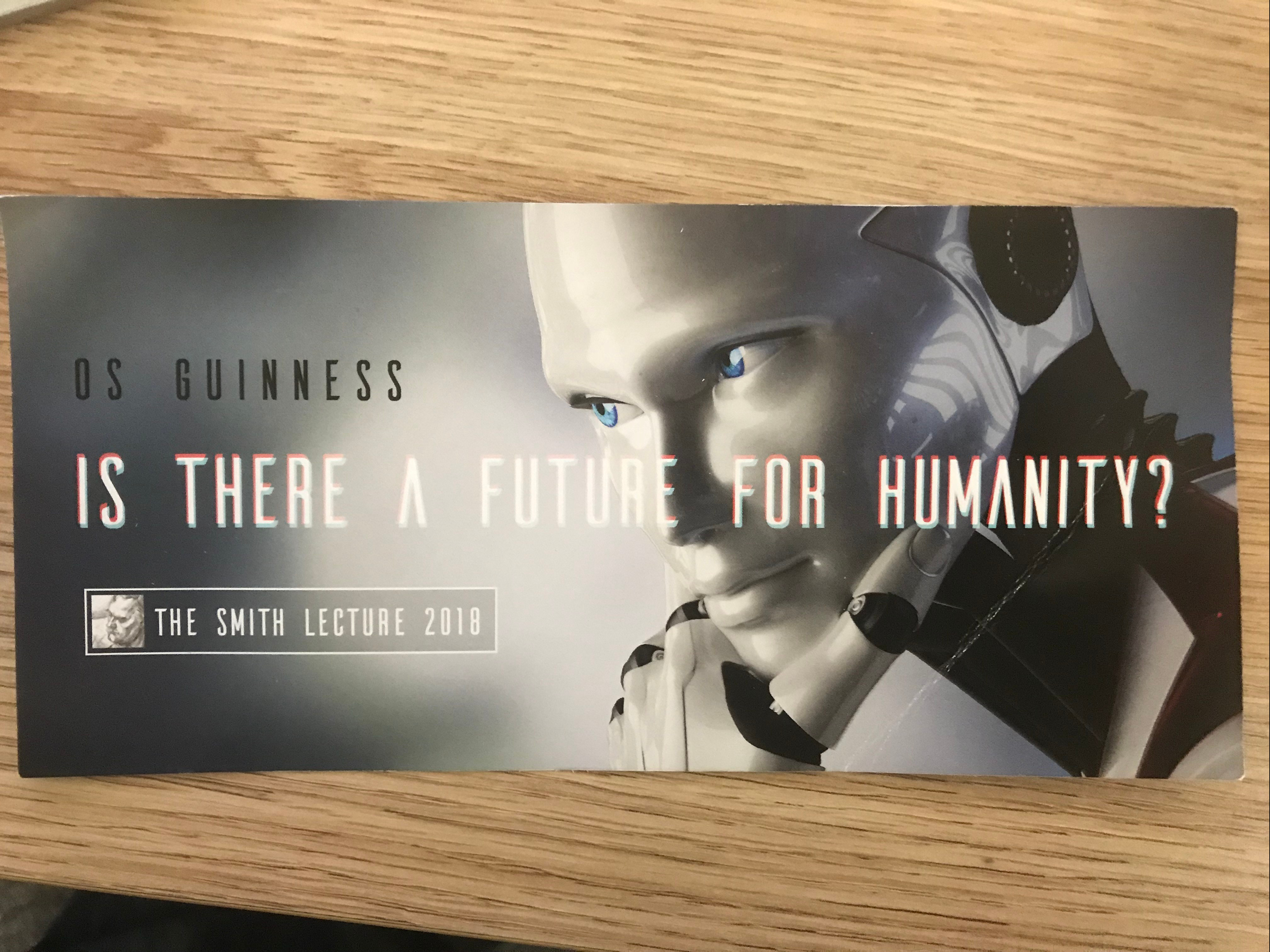 Last night I had the privilege of gathering with a couple of hundred others in the centre of Sydney to hear Os Guinness give the Smith lecture on the future of humanity.   It was a gathering of the great and good in Sydney evangelicalism – from the Archbishop to the former Vice Prime Minister…It was an incredibly encouraging event organised by City Bible Forum. The following are just some of my notes from the night. I think the whole talk will be put on-line.

The Lecture room and Os speaking.

Is there a Future for Humanity?

World War 1 saw shattering of European self-confidence and identity. Some wanted to create a new tower of Babel…

Bertrand Russell  read two novels a week to keep his mind of the destruction of the human race. We are post Auschwitz and post Hiroshima but pre-singularity.

Harari in his book Homo Deus argues that we will become like gods…and that we have solved three horsemen of famine, plague and war.     Having rejected what bound them to God, they are concerned about losing what bounds them together. Some economists say that there will be a great division between the ens (the enhanced) and the uns (the unenhanced). The greatest obstacle to the advance of humanity is the human idea that human beings are different.

Humans have always been dwarfed by the universe – and now we have been dehumanized by the works of our own minds and hands.

The Western view of humanity is based upon the high view coming from our judaeo-Christian tradition. Cites John Gray, Nietzsche, Margaret Sanger , Hitler and Foucault to show where the rejection of this view leads. Foucault said ’man is an invention of recent date – one perhaps reaching its end’. A low view of humanity is not exactly irrational. We are now getting to a stage where those who assert the specialness of humanity are accused of being speciesist!

After creation the image of God is hardly mentioned in the bible. Humans are made of the dust of the earth or the breath of life. Humans are the highest of the high and the lowest of the low. We are dangerously wonderful.

This all flows into the incarnation. Os cited John Donne – the last two lines of this wonderful sonnet

Wilt thou love God as he thee ? then digest,
My soul, this wholesome meditation,
How God the Spirit, by angels waited on
In heaven, doth make His temple in thy breast.
The Father having begot a Son most blest,
And still begetting—for he ne’er begun—
Hath deign’d to choose thee by adoption,
Co-heir to His glory, and Sabbath’ endless rest.
And as a robb’d man, which by search doth find
His stolen stuff sold, must lose or buy it again,
The Sun of glory came down, and was slain,
Us whom He had made, and Satan stole, to unbind.
‘Twas much, that man was made like God before,
But, that God should be made like man, much more.

He spoke of how God is logos, ethos and pathos – man is the pathos of God. God was impassable for the Greeks but the prophets spoke of a God of pathos…God is the most moved Mover – not the Aristotelian unmoved Mover.

There are immense implications for ethics and human relations. Biblically speaking there is a preciousness to every single individual human being. When human beings make coins in the mint they all come out the same…when God made human beings in his image we are all made different. Contrast this with utilitarianism. We are each in Gods image but in no one elses….

Perhaps the most interesting thought of the night for me, and one which changed my mind was Os’s statement that human rights were at risk.  Rather than human rights being the religion of the liberal elites – they are in danger from the new view of humanity.

The poverty of other ways of seeing human beings as higher or lower. Rabbi Herschel. ‘man is far more than the addition of these elements’.

Francis Collins points out how the Chinese are doing things because they don’t have the limitations of Western ethics and the West will soon want to get rid of the human rights elements that have been placed their by the Judaeo-Christian worldview.

“It is a serious thing to live in a society of possible gods and goddesses, to remember that the dullest most uninteresting person you can talk to may one day be a creature which, if you saw it now, you would be strongly tempted to worship, or else a horror and a corruption such as you now meet, if at all, only in a nightmare. All day long we are, in some degree helping each other to one or the other of these destinations. It is in the light of these overwhelming possibilities, it is with the awe and the circumspection proper to them, that we should conduct all of our dealings with one another, all friendships, all loves, all play, all politics. There are no ordinary people. You have never talked to a mere mortal. Nations, cultures, arts, civilizations – these are mortal, and their life is to ours as the life of a gnat. But it is immortals whom we joke with, work with, marry, snub, and exploit – immortal horrors or everlasting splendors.”

Psalm 8  – What is mankind that you are mindful of them, human beings that you care for them?  You have made them a little lower than the angels a and crowned them with glory and honor.

What a piece of work is a man! how noble in reason!
how infinite in faculty! in form and moving how
express and admirable! in action how like an angel!
in apprehension how like a god! the beauty of the
world! the paragon of animals! And yet, to me,
what is this quintessence of dust? Shakespeare

We are not only post truth but post human rights – led by the West and its dangerous philosophies of communism etc…it’s the most dangerous period for humanity – and we need as the custodians of the Judaeo Christian tradition, to fight for the view.

We live to a higher law in a society that has no law.

The tower of Babel – the result was the sowing of confusion…we will never be like God.  We are currently sowing confusion.

Universal Declaration of Human Rights – the Bible of modern liberalism was drafted in the light of Nazism…drafted mainly by a Roman Catholic. Its Western. Post truth society….abandoning truth. We are the guardians of human rights….

Cultures and races and multiculturalism Os said that he was a strong critic. The individual is precious not just the group.

Why are there no forces raised against the ruthlessness of power? The Hebrew prophets were.  We should not be seeking power but truth and justice and freedom because of the freedom and dignity of the individual.  We should be speaking on behalf of the poor against the elites!

Political correctness is diabolical – it is stifling thought and freedom and justice.

The ultimate discriminator is the Lord.  ….removing the binaries attacks the fundamental conviction of Christians.

The sexual revolution has been seeking to pervert and destroy for many years.  The church is the biggest obstacle to that revolution.   The key thing they now want to do is get rid of the power of parents (note for example the proposal by the Scottish government to allow 12 year olds to ‘change their gender’ without telling their parents!).  The sexual revolution has been stopped twice – once in a bad way by Lenin and the other by the Methodist revival in the 18th century….

Can we see the same again…..?   The insanity in our universities and much of our elites must be stopped –  we must each of us speak but it will need revival…

This was a stimulating, challenging and for me affirming lecture – which confirmed what I have been seeing for decades and have been trying to say (although much less eloquently) for years.   I was so encouraged.   Os is probably the living writer who has had most influence on my life – he continues to do so.  I wish that more in the church would listen to him.  He is a genuine prophetic voice.

Why I Still Believe – in Humanity.