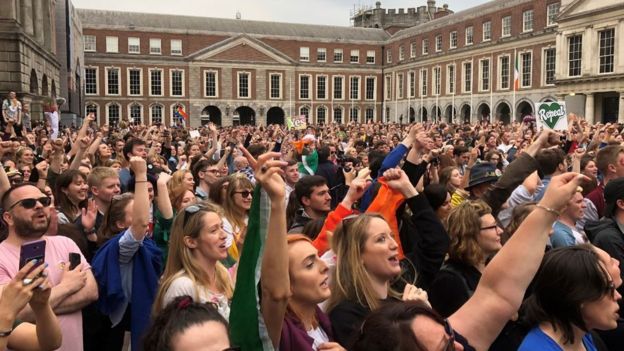 There has been much rejoicing in Ireland over the result of a referendum. Large crowds gathered in Dublin city centre. A party was in full swing in Dublin Castle. Groups of cheering and clapping people were at the airport to cheer on those who had flown back especially to vote.

“Taoiseach Leo Varadkar was also greeted by cheers when he arrived as was Ailbhe Smyth from the Together for Yes campaign. Supporters ate After Eight chocolates and popped bottles of Champagne while waiting for the result to be announced. Some supporters dressed as angels, while hundreds wore jumpers and T-shirts with campaign slogan.”

“A ‘quiet revolution’   “I want to reassure you that Ireland today is the same as it was last week, but more tolerant, open and respectful.”  Irish Prime Minister – Leo Varadkar

Imagine you had been away for a few months and returned to this scene. You would ask – what is the cause of this celebration and rejoicing? Why are people so happy? Why are they popping the bottles of champagne and rejoicing? What has made Ireland a more tolerant, open and respectful country?   Have they just become independent? Has Ireland been reunited? Did they just become the richest nation on earth? None of the above. This is really hard to grasp and understand but the reason for this celebration is that the Irish people voted overwhelmingly 2:1 to permit abortion on demand for any reason up to 12 weeks, and for various other reasons afterwards.

Despite the efforts of this fine young Irish woman who in this clip expresses the case clearly.   “Ireland will have the right to kill disabled children in the womb before we have property facilities for disabled children out of the womb”

Let us suppose that you supported the right to abort a child – would you not regard it as a ‘necessary evil’ and mourn the fact that it had to happen at all?   In a civilized society, even if you regarded abortion as necessary, would this not be a day of solemnity and sorrow – even if you had received what you called the right vote?

But to dance in the streets because you had just given mothers the right to kill their own unborn child is not civilized. It is barbaric. Rather than progressing into being a more tolerant, open and respectful society, Ireland has regressed over 1500 years into his pre-Christian pagan past, where the weakest members of society are not tolerated and not respected. They are destroyed.

If you want to see how this ‘quiet revolution ‘ (a revolution which somewhat illogically according to the Prime Minister has left Ireland ‘today the same as it was last week’) shows its tolerance and respect, look at this video.

Celebrating the right to kill children in the womb as though it were a football match…we are the champions….’we are a better country’ and yelling at the pro-life people ‘choice, choice, choice’ (what choice does the baby have?).  This is the new regressive Ireland.

Even more chilling is the statement that “Ireland has moved into the 1950’s’ which suggests that of course the ‘progressive’ movement will continue even more in its regression into the pit.

The result was of course welcome by regressive politicians, media and religious figures from all over the world. The New York Times described it as sweeping aside generations of conservative patriarchy and a rebuke to the Catholic Church. Vicky Beeching was one liberal ‘evangelical’ who rejoiced.    Anna Soubry, Troy MP in the UK parliament welcomed it and saw it as an opportunity to push her obsession – preventing Brexit.

In that same vein the Scottish journalist Ruth Wishart tweeted.

“On Independence in Scotland, Brexit in the UK, and now abortion law reform in Ireland, young voters are leading the way. Time for my generation to wake up and smell the future.”

This is what the progressive future means. Indoctrinating young people so that we can kill the young (killing the old and sick will come soon)…

The Scottish government was not slow to virtue signal its own progressiveness. Scotland’s First Minister tweeted:

“Congratulations to @Together4yes and the people of Ireland.“Compassion, justice and trust in women win the day.“Joyful moment – but also one to remember the heartbreak for many along the way.”

We are governed by a First Minister who thinks taking life in the womb is compassion and justice and that voting for the right to do so is a cause for joy! If ever there was something that demonstrated the death cult that is progressive liberalism…..

I found this somewhat ironic given that Mr Russell is currently trying to overturn two referendums (the Scottish and European ones) which did not go his way. Clearly they were not ‘positive, modern and thoughtful!   I wonder if Mr. Russell will support the calls already coming for the UK government to impose abortion on Northern Ireland? It will be interesting to see if the principles of devolution are to be overturned by principles of the progressive death cult.   My money is on the latter.

Speaking of referenda this was also a spot on critique of the selective way that facts are used:

“Wonder if any Remainers disputing result of EUREf on grounds that referenda aren’t sensible way to settle important, complicated questions because ordinary people lack the education or intelligence to fully grasp them, will dispute the results of the Irish Referendum on the same grounds?”

Leaving that trivial detail aside – this whole issue is profoundly upsetting. To see the nation that was once used to civilize Europe now descending into barbarity is absolutely heartbreaking. I really feel for my Irish brothers and sisters. This Sunday it reminded me of this song.   I realize that U2 have long ago sold out their Christian principles and indeed were major supporters of the Yes campaign – but the words of their own song about the unjust death of 14 people on bloody Sunday – the rage and the cry how long – are surely even more apposite today – when U2 and two thirds of the Irish people have voted for the death of hundreds of thousands.

I can’t believe the news today
Oh, I can’t close my eyes
And make it go away
How long?
How long must we sing this song?
How long, how long?
‘Cause tonight, we can be as one
Tonight

And the battle’s just begun
There’s many lost, but tell me who has won
The trench is dug within our hearts
And mothers, children, brothers, sisters torn apart

How long?
How long must we sing this song?
How long, how long?
‘Cause tonight, we can be as one
Tonight, tonight

The cry ‘How long?” was lifted from the Bible.   As it happens Psalm 79 was my bible reading for the bloody Sunday. It was so apposite and for the first time in my life I prayed it with understanding and absolute conviction.

O God, the nations have invaded your inheritance;

they have defiled your holy temple,

they have reduced Jerusalem to rubble.

as food for the birds of the sky,

the flesh of your own people for the animals of the wild.

and there is no one to bury the dead….

of scorn and derision to those around us.

that do not acknowledge you,

that do not call on your name;

and devastated his homeland.

may your mercy come quickly to meet us,

for we are in desperate need.

for the glory of your name;

deliver us and forgive our sins

for your name’s sake.

“Where is their God?”

Before our eyes, make known among the nations

that you avenge the outpoured blood of your servants.

with your strong arm preserve those condemned to die.

the contempt they have hurled at you, Lord.

will praise you forever;

we will proclaim your praise.

Sam Alberry was correct when he commented:

In order to prevent this slide into barbarity Ireland needs a new St Columba. Ireland needs a Christian revival. Pray for those who are engaged in church renewal and church planting in that once great country.  Pray that the anti-abortion campaign will continue and that the Church of Jesus Christ will continue to reach out and show compassion to those who are considering abortion and those who have had abortions.    May Ireland flourish by the preaching of the Word. How long, O Lord, how long?

Abortion, the Church of Scotland and the Media