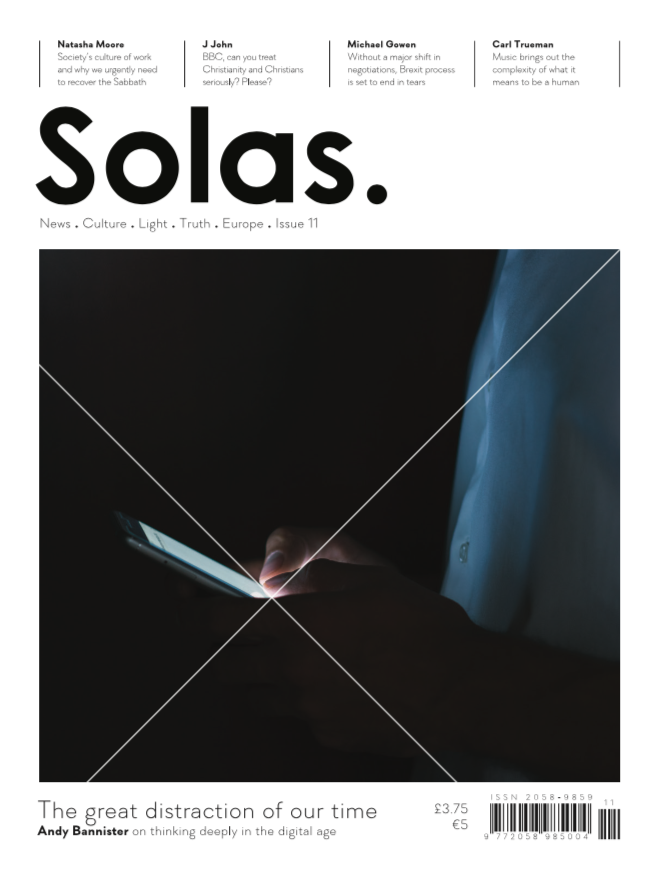 Not everything you try works out.  Not every good idea works out.  Sometimes we fail.  I had an idea that a quality Christian magazine reflecting on culture, politics, the arts etc would be a winner…I was wrong. I’m pretty gutted about that.   These are my reflections on that sad fact in the last edition of the Solas magazine – published this month.

Solas is the Gaelic word for light. Its one of the reasons we chose the name – Gaelic reflecting our Scottish roots, light because what we were and are seeking is a new

Enlightenment. Stephen Pinker in his recent hyper optimistic book, Enlightenment says that things are largely getting better, and they are getting better because of the 18th Century Enlightenment – from which, according to Mr. Pinker, everything good comes. In a somewhat Disneyfied version of history and todays society – Pinker believes that nothing bad came out of the Enlightenment and humanity will continue to be ‘enlightened’ in the values of modern Western liberalism as the traditional enemies (the patriarchy, anti reason and above all religion) are beaten back.   His fellow atheist John Gray, in his book Black Mass, not only does not share that optimism but also devastatingly shows that such unrealistic optimism was a root cause of the great atheistic secularist regimes of the 20th Century.

John Gray mocks his fellow atheists rather unrealistic faith that they would increase whilst religion would decrease. He states that they believe that “the grand march of secular reason would continue, with more and more societies joining the modern west in marginalising religion. Someday, religious belief would be no more important than personal hobbies or ethnic cuisines.” But that is not happening. A pew research study shows that by 2050 it is expected that only 13% of the world’s population will not be religious, compared to 16% today. Although the growth of the non-religious is expected to continue in the West. And therein lies the problem. This is all about a limited Western perception.

In the West there is an existential gap that has been caused by the rolling back of the Christian faith. Whilst some still have the hope that the kind of idealized liberalism espoused by Pinker will triumph, there is an increasing awareness that such a dumb downed philosophy, combined with the numbing fruits of materialism, just does not satisfy. The cry of The Preacher in Ecclesiastes ‘Meaningless, meaningless, everything is meaningless’ is not answered by Dawkins/Pinker et al declaring ‘there is meaning in this meaningless universe, just make up your own’.

When Gordon Wilson and I began Solas we did so out of the conviction that this existential gap offered a renewed opportunity for a renewed Christianity. After all Christ meets the deepest needs of all peoples. The problem was that whilst we recognized a growing hunger amongst many Western people, we also noticed that the Church seemed less and less equipped to feed the hungry. We were also too caught up in the liberal, materialistic and shallow narrative that we have been drip fed from our childhood.   Many churches seem to have just accepted that liberal narrative and have in effect given up on the Gospel. They use the words, but mean something very different. Others seem to have retreated into a legalism or indeed even a cynicism and despair. Its almost as though we are expected to get into the lifeboats and just wait until Christ returns. It’s a depressing and morbid picture.

The idea of Solas Centre for Public Christianity is both to equip churches, Christians and individual organisations for the task of bringing the Gospel into this gap, and to actually do it. We do not believe that standing on street corners, yelling bible verses at people, constitutes biblical evangelism. Nor does giving in to every shibboleth of the new authoritarian liberalism. Telling the Good news is all about breaking up the ground, sowing the seed and waiting for God to give the increase.   Our aim was to get involved in the secular media, to produce resources for use on social media and to challenge, change and equip churches for the task ahead.

In terms of breaking up ground it is essential that we seek to wake people up to what is happening all around them. In the film Vice there is a tremendous line   “People tend to avoid churches when they are living in a state of perpetual fantasy”. Our job is to challenge the fantasies and to awake people to the reality – both of the direness of our current state, and the glorious good news of the Gospel.

In Acts 5:20, the Apostles having been released from prison, are told by an angel to “Go, stand in the temple courts,” he said, “and tell the people all about this new life.” In other words they were told to go and repeat what had caused them to end up in jail in the first place. Such courage and boldness is largely missing from the Church in the West today.   Then in Acts 17 – Paul goes to Athens and stands in front of the Aeropagus and tells the philosophers and leaders who had invested so much in it, that they were wasting their time as the God who made the heavens and earth does not dwell in temples made by human hands. It was a brave challenge to the idols and ideologies of the zeitgeist.   In so doing Paul used pagan poets, debate, reasoning, Scripture and above all, the proclamation of Christ, to communicate the Good News.

Acts 5:20 and Acts 17 were foundational texts for me when I entered Christian ministry. 35 years later they remain so.   Our aim is not to preserve Christendom, make money or promote a personal agenda. Its much more simple. We want to tell spiritually starving people about the bread and water of life – Jesus Christ. He is the Good News. The Gospel is not that everyone is saved and God will forgive you whatever. The Gospel is that human beings are in a mess (because of what Chesterton called the most provable doctrine in the Christian faith – original sin) and that God sent his Son, not just to teach and show us good things, but also to die and make atonement for our sins. It is in him that repentance, the forgiveness of sins and the new birth and life are offered.   In Christ there is hope for everyone – from the most hopeless drug addict to the most depraved sensualist; from the most corrupt politician to the most pharisaical priest! We proclaim Christ.

One of the tools that we sought to use was this Solas magazine. My belief was that, at a time when printed newspapers were declining in both quality and sales, but quality magazines are growing, there was room for a magazine, which sought to comment on politics, society, art and culture from an intelligent Christian perspective. It was intended to be a kind of pre-evangelism – breaking up the hard secular ground.  We tried to be radical and different. We didn’t dumb down, we were not denominational and we did not seek to survive by advertising. I thought that there would be sufficient people within the English speaking church who would appreciate and pay for such a magazine. The Solas board, to their credit, agreed to give it a go. But although Scott Simpson as our editor and Fin Macrae as our designer did a fantastic job, producing a magazine which in design and content, exceeded expectations – we were just not able to get enough subscriptions.   I was wrong.

A Lack of Vision

I like to think that the magazine will be resurrected when someone with enough capital is prepared to back it (contact me if you are reading this!) but meanwhile I offer this simple reflection. The Christian church in the West lacks vision. Whilst churches and Christian organisations have grand sounding mission statements about reaching the whole world, in reality they struggle to reach their own streets and are often more concerned about maintaining their structure or building their own mini empire. We have an instant ‘cup-a-soup’ type of Christianity, where we think that we can just pour out a little and we have instant Christians, churches and communities.  The mentality is such that as a result the programmes which are designed to have instant results are the ones that get the cash. Most people are not interested in the breaking up of the ground or even the sowing of the seed. We want to go straight to reaping the fruit.

I also believe that whilst there is a danger that some Western Christians can be over intellectual, such creatures are a rare breed. There is a fundamental anti-intellectualism within much of Western Christendom. Learning is only perceived to be good if it has immediate practical effects.   Therefore many Christians, churches and funders don’t really understand why a magazine which seeks to understand and comment on the culture should exist without offering an immediate ‘how to’ or political solution.  I believe that is a shortsighted, short-term view.

The Work Goes On

The magazine will go. But it has shown what can be done. Meanwhile we continue with the other work of Solas under the leadership of Dr Andy Bannister. We will continue to create resources, train Christians and equip churches. And I will continue to seek to get the Gospel of Jesus Christ into a secular world that is in such desperate need of him. The real Enlightenment that truly changes the world comes only from the Light of the World entering into that world. Come Lord Jesus!

Give me Scotland or I die