The May Record is now out – you can get a digital copy here for pennies! – Why not sign up for a year – only £18…..and pass the word on to others.  The lead article was really hard to write….I attach it below.  There is an excellent interview with Simon Manchester… 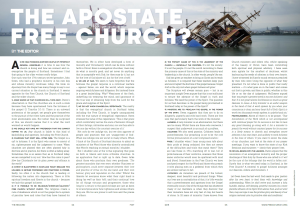 As we head towards another couple of important General Assemblies it is time to see how the church is doing and how we connect and re-evangelise the people of Scotland. Sometimes I find that going to the older writers really helps.

One such was the 17th-century writer/preacher John Owen, who had a prophetic ministry in his own day and whose ministry continues today. His book on Apostasy from the Gospel has many things to say to our current situation in the church in Scotland. It seems apposite for the Free Church, the Church of Scotland and the wider church.

1) Jesus warns us that churches will turn away.

Owen’s observation is that the churches are in such a state because they have apostasised from the holiness of the gospel (2 Timothy 3:1-5). There is an outward profession of the gospel, yet people give themselves to the pursuit of the vilest lusts and the practice of the most abominable sins. But rather than be surprised at this, we should realise that it is what the Lord warned us would happen.

2) We should not have any pretension that this cannot happen to us.

Any church is liable to this kind of backsliding and apostasy. Including the Free Church.

The Gospel is a call to holiness. It is the Spirit who comes to convict of sin, righteousness and the judgement to come. When churches are planted they are often planted holy in doctrine and in practice, but there is often a fading away. Sometimes this is so severe that, as in Scotland today, we are compelled to cry out: ‘How has this come to pass? How has Christianity lost its glory, power and efficacy in the world?’

4) Christ is blasphemed in Scotland today because this holiness is neither professed nor practiced in power.

Sadly, too often it is the church that is leading or following the nation into degeneracy. There is little spiritual freedom and liberty in the church – because we lack this gospel holiness.

5) It is possible to be religious/Christian/Calvinist/Free Church without Christ.

The religious create a rule of obedience which is not the gospel but a system of peculiar laws and rules that they have framed for themselves. We in effect have developed a form of morality and ‘Christianity’ which can be done without faith in Christ. Even in evangelical churches, ‘men may do what is morally good, and yet never do anything that is acceptable with God; for they may do it, but not for the love of God above all, but for the love of self.’

We seem to have forgotten that the holiness the gospel requires is a continual warfare – against Satan, sin and the world, which requires ongoing watchfulness and diligence. But instead there is a great backsliding. Why? Weariness of the flesh, indwelling sin wearying the mind, and ignorance of the true way of obtaining help from the Lord for the grace and supplies of the Spirit.

7) We do not know evangelical repentance.

The reality is that the evangelical church in Scotland today, including the Free Church, is largely unacquainted with the true nature of evangelical repentance. Owen stresses the value of this repentance: ‘This is that grace which comfortably carries the souls of believers through all their failings, infirmities and sins; nor are they able to live one day without the constant exercise of it.’

Not only do we indulge sin, but we also approve of people and practices that are ‘unapproved of God’. When we indulge one sin we let in many others. When I think of the Church of Scotland decision to admit as ministers of the Word those who directly contradicted that Word’s teaching on sexual morality, I shudder.

But I shudder also at the virtue signaling that goes on both in liberal and more orthodox churches. In an application that is right up to date, Owen talks about those who proclaim their own goodness. ‘The greatest moralists that ever were, whether Pharisees or philosophers, could never separate between their love and practice of virtue on the one hand, and their own honour, glory and reputation on the other.’ Whilst the liberals let everyone know what their right hand is doing (as well as their left), and their continual love for all things virtuous and progressive, those who long for a return to the good old days are just as keen to let everyone know how righteous and unlike others they are. We too are prone to self-love and the praise of others.

8) The primary cause of this is the leadership of the church – especially the ministers.

It’s not the society. It’s not the people. It’s not the world. According to Owen the primary cause of this is the state of the ministry and leadership in the church. In other words, people like me.

God has given us teachers to bring us Christ and to teach us holiness. It is required that these teachers keep ‘pure and uncorrupted’ the doctrine of the gospel because ‘Gospel truth is the only root where gospel holiness will grow’.

The Scripture will always remain pure – but in an important insight Owen argues that this is not sufficient to secure the advance of the Gospel in truth and holiness. We need the power of the Spirit. The question for us then becomes: is the gospel being proclaimed in Scotland today in the power of the Spirit?

One of the things that has shattered many of our members is when they discover that their ministers have not only feet of clay, but hearts of stone.

9) Ministers are to proclaim the gospel in the power of the Spirit.

Owen suggests that they are to do so diligently, urgently and with hard work. There are five sins that particularly harm the work of the minister.

10) Revival begins with the leaders.

Owen argues that the renovation of an evangelical ministry and the proper discharge of that duty by those who are called to it ‘will be the cure of the lethargy that the world is fallen into’. Surely that is what we need today, in Scotland, in the Free Church? A renewal to gospel holiness amongst our deacons, elders and ministers.

Let Owen have the last word:

God needs to give ‘pastors after his own heart, to feed them with knowledge and understanding. When he shall revive and increase a holy, humble, zealous, self-denying, powerful ministry, by a more plentiful effusion of his Spirit from above; then, and not until then, may we hope to see the pristine glory and beauty of our religion restored unto its primitive state and conditions.’