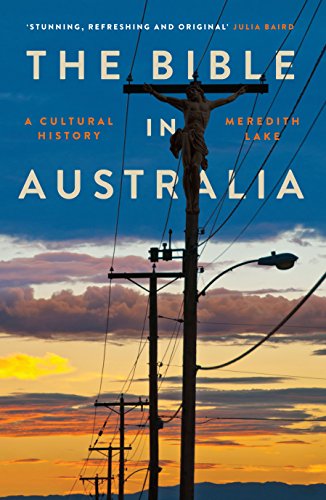 I am loving reading Meredith Lake’s new book – The Bible in Australia: A cultural history. I’m not quite finished it but here are some fascinating quotes:

“On another occasion, Dickey attempted to convert an old man, telling him: You must love God – you must settle, then Mr Walker can preach to you, else I shall go to heaven and you will go to hell – the fire burn you, you will ask me for water and I would not give you a drop.11 Dickey’s short sermon reveals a remarkable fact: Bennelong and Boorong’s son was the first Indigenous Australian evangelist.”

“By the 1830s and 1840s, perhaps a quarter of convicts arriving in Australia had tattoos – we know because they were recorded along with other identifying physical details. Biblical images and quotations were very common. A number of convicts tried in Scotland were tattooed with ‘crosses, images of the fall, crucifixion and apocalypse’.

” What stands out, in Australia, is that missionaries did more to learn local languages than virtually any other group of colonists. Their limitations and failures were often considerable, and they played their own part in undermining Indigenous cultures. But they and their Indigenous collaborators left an important legacy nevertheless. In their drive to communicate the Word of God in a language that Indigenous communities could understand on the deepest level, they documented and described tongues that, in most cases, have since become extinct. Bible translations and related texts now form the only or most significant record of those languages. Without them, it would be much more difficult – sometimes impossible – to recover anything of those tongues. The Bible, in the vernacular, is a living word”

“The priority to share the Scriptures – like the insistence on the human worth and dignity of Indigenous people – could bring them into conflict with other settlers. Threlkeld, for instance, recognised that ‘if it could be proved that the Aborigines of NSW were only a species of wild beast, there could be no guilt attributed to those who shot them off or poisoned them’. In rejection of such racism, he devoted himself to language work as ‘a convincing proof that they have an equal share of intellectual power with others of the human race’. In the midst of conflict over land and hardening notions of race, language and translation work was as contested as the idea of common humanity.”

“The white men have killed us all; they shot a great many. We are now only a few people here and we ought to be fond of one another. We ought to love God. God made everything, the salt water, the horse, the bullock, the opossum, the wallaby, the kangaroo and wombat. Love him and you go to him by and bye.”

As already noted the Sydney public transport system is superb. It is well run, efficient and relatively cheap – the Opal card system is great. I am loving being carless! Waiting for a train in Redfern we had the joy of seeing this steaming past!

China and Vanuatu – There is concern in Australia over the growing power of China.

Although these have been denied there are reports that China is seeking to establish a naval base on Vanuatu – just 2,000 kilometers from the Australian mainland. There is little doubt of what is happening – “Beijing has been showering Vanuatu, which has a population of about 270,000, with hundreds of millions of dollars in development money and last week committed to building a new official residence for Prime Minister Chariot Salwai as well as other government buildings”.   The significance of this in the medium and longer term cannot be understated.

Church observations: I am learning a great deal by observing, attending and speaking at various churches and Christian groups. There is much to be admired in the Australian church, as well as the usual problems that beset us all. In general there seems to be less tribalism and denominationalism here than in Scotland – I have noticed a pleasing openness to working together and across denominations.   I suspect that the (very) low church view of the Sydney Anglicans has something to do with this.

Another big plus is the commitment to evangelism and church planting in the churches I have visited (perhaps this is a self-selecting group). One such was Parramatta cathedral that finds itself at the heart of Australia’s fastest growing community (Western Sydney which is expected to grow by 2 million) and has a clear vision for church growth and development. They surely have one of the best locations for outreach and church planting I have ever come across. I was also impressed with their multi-racial mix and the fact that they have Persian and Chinese congregations.

There are cultural differences that are reflected in the churches. It seems to be the norm for many churches to have three different services – an 8am (traditional); 11am (informal/family) and 5pm (contemporary).   People speak of themselves as belonging to the ‘8, 11 or 5’ congregation. There are advantages and disadvantages to this. The biggest advantage is the flexibility and variety it allows. The biggest disadvantage is that it fragments the congregation into ‘congregations’ filtered according to age and style and loses the Lord’s Day. At one church I was told that the 9am was a jacket and tie, the 10:30 no jacket and tie required and the afternoon was ‘thongs and shorts’ (thongs for UK residents is a reference to open sandals not skimpy swim wear!).

Some other random cultural things…the musicians were referred to as ‘the Musos’.  The sermon is sometimes referred to as ‘the bible talk’. I was at a church where there was coffee and refreshments, before, after and during the service. The ‘during’ was a new one to me. Just as the children left for Sunday school in the middle of the service and before I preached we were invited out of our pews to the front to greet one another and share refreshments. I hated the idea, but I have to admit it seemed to work fine and didn’t affect the sermon (I think).

One final question to which I do not have the answer. So far I have not been in a church that has a benediction. Does anyone know why this is?

We have met so many fascinating and encouraging people – none more so that a 70 year old lady who describes herself as a Sri Lankan sexologist. Patrica Weerakoon is a tremendous woman who has had a great ministry in academia, the field of sexual health and the church. Annabel and myself enjoyed meeting with her and her family. I was impressed with her short talk at Katoomba and am looking forward to reading her books for children, teenagers and adults. What I have seen so far suggests that these could be really valuable for the church in the UK and the US…reviews will follow!

Israel Folau – Last week I mentioned Israel Folau – I have written an article for Christian Today which will be up tomorrow but I thought this was a rather good blog on what Folau should have answered – http://st-eutychus.com/2018/what-id-say-to-israel-folau-and-those-who-read-his-comments-about-gods-plan-for-gay-people/

Meanwhile I read an appalling intolerant and prejudiced article in the Sydney Morning Herald so I wrote the following letter which is as yet unpublished and will probably remain so…see you next week.

It is important that when people report on issues which can have a big impact on others lives that they ensure accuracy and understanding.  Georgina Robinson (SMH Saturday 7th) does not appear to understand Folau’s comments which taken out of context sound horrendous to modern ears.  The trouble is that Folau believes what the Bible says – not that homosexuals go to hell because they are homosexual – but that everyone who rejects Jesus Christ is heading for hell.  The problem is his belief in hell, not his views about homosexuality.    But his views are the views of the Orthodox, Catholic and evangelical Protestant churches.  Are they all to be condemned, banned or punished for expressing a view with which the elites in our culture would disagree?  Robinson argues, “No one is arguing that Folau is not entitled to his beliefs or to talk about them.” – but that is precisely the effect of what she is saying.  As a visitor to Australia I have to ask – are you really that intolerant?