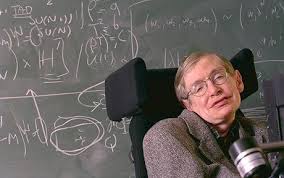 I was saddened to hear of the death of Stephen Hawking – I had recently read a biography of him – as well as watching the sanitised airbrushed Hollywood version of his life – The Theory of Everything.

Brilliant mind though he was, he allowed his atheist upbringing and prejudice to distort his reasoning.  None more so than his claim in The Times  from 8 years ago – “There is no God”.   I’m told that his views seem to have softened in his latter years and that sometimes he even attended church. But this was the response I gave 8 years ago…it still applies today…

There is one correction to the video: Feynman created the path integral calculations in quantum mechanics that Edward Witten used to develop the M-Theory. Though Feynman is no longer alive to defend his position, his written works indicate that he would not have supported an untestable theory like the M-Theory to explain the causation of the universe. Thanks to Graham Robinson for pointing this out.