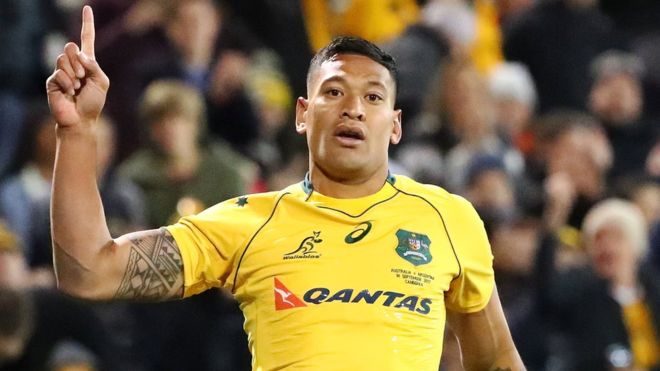 This article was first published on the Christian Today Website

Israel Folau is the new Jonah Lomu – a rugby player with an ability that marks him out from his team mates. He is the key figure in the Australian rugby team, the Wallabies. But he is under increasing pressure after having committed the unforgiveable sin – questioning the current absolutist morality of Western liberalism.

First, he stated during the recent Australian same sex marriage referendum: ‘I love and respect people for who they are and their opinions, but personally I will not support gay marriage.’ You would have thought this was a fairly innocuous statement but it was met with a string of abuse and threats. This was sadly all too characteristic of a vitriolic and abusive referendum which saw some employers threatening to dismiss workers who publicly spoke in favour of traditional marriage, churches being attacked and those who opposed same-sex marriage being compared to Nazis.

One tweet made the perfectly reasonable point: ‘Why worry about what a rugby player thinks? Why is his opinion even relevant?‘ But reason was out of the window in this debate. After Folau made his statement, Wallabies coach Michael Cheika and captain Michael Hooper met with politicians to show their support for the proposed legislation. It appears that it does matter what sporting organisations think of same-sex marriage. Cricket Australia and the Football Federation Australia also stressed their support for it.

Of course they did. Sporting institutions are as keen as any other to demonstrate that they are on message and deserve the support of government funding bodies.

Rugby Australia is one such ‘on message’ organisation. Two weeks ago it unveiled its new branding campaign to show that rugby is more than just a game for affluent white men. Entitled ‘Part of More’, it features Indigenous Australians and a Muslim family among others in order to demonstrate how inclusive it is. And then Folau upset the apple cart when in response to an Instagram user who asked him: ‘What was God’s plan for gay people?’ he replied, ‘Hell… unless they repent of their sins and turn to God.’ 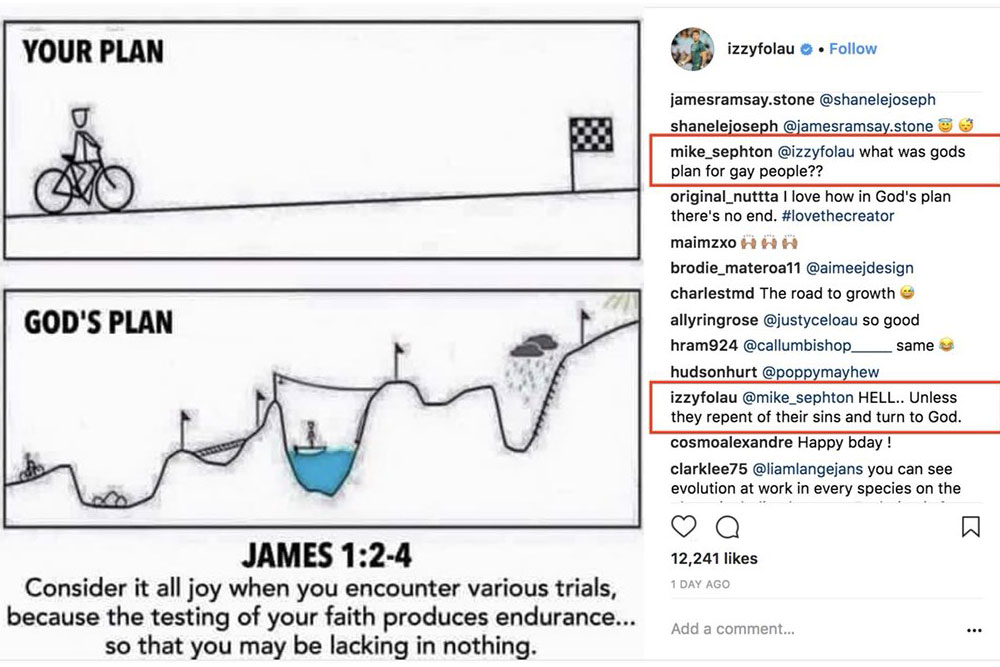 Cue all hell breaking loose. Rugby Australia disowned his comments and supported ‘all forms of inclusion’. It added: ‘Folau’s personal beliefs do not reflect the views of Rugby Australia.’ Qantas, its sponsor, said: ‘We’ve made it clear to Rugby Australia that we find the comments very disappointing.‘ The usual social media hate mob called on the airline to end its sponsorship of the Wallabies: ‘There should be no space on the @qantaswallabies or @NSWWaratahs for people pushing such prejudiced and hurtful views.’ And the liberal media joined in the pontificating sanctimony. Georgina Robinson in the Sydney Morning Herald accused the Australian rugby team of ‘tiptoeing around its most famous, highly paid and off-contract player making a mockery of the values for which it says it wants to be known’.

I am in Australia for three months and it is interesting to observe how the same ‘liberal’ modus operandi works here as it does in the UK and the USA.

First, there is outrage and intimidation against any public figure or institution that dares to go against the new absolutist morality.

The Sydney Morning Herald said that no one was arguing for Folau’s contract to be torn up or that he was not entitled to his beliefs or to talk about them, but in effect that is precisely what they were arguing for. The heretic must be silenced and brought to heel.

Then in the name of inclusion they seek to exclude. No self-respecting member of society should dare to have such view and so, in the name of ‘inclusion’ anyone who does will be excluded from respectable society. Rugby Australia says that it is ‘inclusive’, but like the rest of our ‘inclusive’ society it is not prepared to include those who hold to a traditional Christian view of morality, sex and marriage. Or indeed any individual or group who dares to question the new legalism.

In order to impose their views they use a stick and carrot approach. The stick is seen in the approach taken by Qantas in demanding that Folau be dealt with – the threat of withdrawing sponsorship is always a powerful one in the world where corporations rule. The threat of having your contract removed or career stalled is also a powerful one. Folau is such a valuable player that I suspect he will not be removed, but those who are more vulnerable have been sent their warning.

The carrot is seen in the way that the various institutions keep giving each other awards. The Qantas chief executive, Alan Joyce, won an award for his vociferous campaigning for same-sex marriage. This week I read of a politician who had won an award as politician of the year for campaigning for it. Governments and corporations set up or sponsor institutions/think tanks/charities which then give awards to those in government and the corporations who do what they have pre-determined should be done already.

In terms of our inclusive society I simply ask, do we really want to have a society where corporate companies tell sports players (and by implication the rest of us) what they should believe and say?

To others Folau is a hero. He is a champion of free speech and a great example of a Christian who is not afraid to speak out in public. His Twitter bio is, ‘I love God. Living the dream.’ His most recent tweet is a quotation from the Sermon on the Mount ‘Blessed are you when men shall revile you, and persecute you, and shall say all manner of evil against you falsely for my sake. Rejoice and be exceeding glad: for great is your reward in heaven: for so persecuted they the prophets which were before you.’

Personally I think that he was caught in a trap and made an unwise comment, answering a question in such a way that it came across in another way. Folau believes, as do the Orthodox, Catholic and evangelical Protestant churches, in hell. He believes that Christ came to save us from hell and that those who die without Christ are lost. His mistake was in answering the question in such a way that it could be taken that homosexuals (as opposed to everyone) were especially destined for hell. Christianity is very inclusive. All have sinned and fallen short of the glory of God. All are invited to come to Christ. That is real inclusion.

People may and do disagree with that viewpoint. But to ban such sentiments is in reality an attempt to ban the preaching of the teaching of Christ. It is not just an attack on freedom of speech and freedom of religion. It’s a fruitless attempt to stop the words of Christ. Heaven and earth (and Rugby, Qantas and the Sydney Morning Herald) will pass away, but the words of Christ will endure forever.

Ozzie Observations – Week 4 – The Bible in Australia, China and Vanuatu,Parramatta Cathedral, the Church and Israel Folau