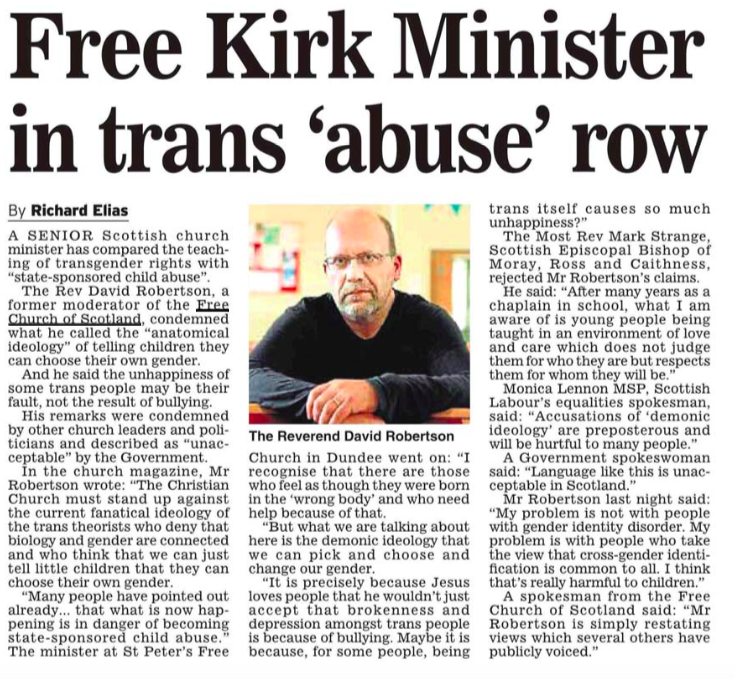 The Lords timing is perfect!

head on sabbatical at just the right time.  As the son of The Beast from the East arrives in the UK we will be heading East to Australia.  Its not just the physical storm we will be leaving.  I am deeply conscious of the needs of the church, my own sin and weakness and the decay in the culture.  In that last respect I leave at a time when my name is being trashed in several papers because of the stance I have taken on behalf of the Free Church on the issue of the day, transgender and gender self-identification.   Firstly I wrote the Free Church response for the Scottish Government Consultation – and then I had this editorial in The Record.

The backlash has been fierce.   The Times contacted me and asked for a 150 word comment which they would publish in an article in which I was attacked

The statement I had given them was as follows:

“I agree with the EIS that schools should be inclusive and welcoming for all pupils including those who suffer from gender dysphoria. However accepting pupils is not the same as accepting ideologies and I do not agree that schools should teach Queer theory that argues, without any scientific basis, that gender is just a social construct. It is harmful to children to teach them that they are not boys or girls but were just ‘assigned a gender at birth; that biological sex has nothing to do with being male or female; or that they can change as they wish. Rev Mark Strange’s statement whilst full of the usual meaningless truisms, is judgemental and wrong. We are all the children of the God who created us male and female – and I will do my best to protect children from those who seek to destroy that. I’m sure that most parents in Scotland will agree with me in opposing this current dangerous illiberal fad. “

Despite their promise, and despite that fact that that one statement took me a couple of hours to carefully think, write about and pray over – they didn’t use a word of it – instead going for a dramatic headline, and the usual words of condemnation from politicians and clergy.  Most chillingly was the condemnation of the Scottish government who deemed me ‘unacceptable”.  (I understand that The Times will publish a letter from me on Saturday).

It was sad, but not unexpected that Rev Mark Strange, Primus of the Scottish Episcopal Church, should disagree with me – but the fact that he issued  a press statement really took me by surprise.  Still at least we now know that he and The Times read The Record!

Then of course a press agency knowing that they had a story contacted me and I spent a great deal of time explaining my position – including explaining what I was not saying and trying to make the position clear.  For those who don’t know how this works the press agency write a story and put it on ‘the wire’ to be picked up by various newspapers as they wish.  The newspapers themselves don’t investigate the story – or usually interview the participants – they just lift whatever parts of the story from the wire and use as they wish.  I wanted to change the narrative from ‘evil churchman is condemned by nice people’ to a discussion of the subject itself.  I was asked by the press agency if I had the support of the church, or was I speaking on my own.  I assured them that my position was the position of the Free Church.  They then went to the Free Church and asked if they supported what I said.   The Church issued the following statement of support which was carried in full on the wire:

“As editor of The Record, Mr Robertson is given a large measure of literary freedom to express himself and provoke the kind of debate that transgenderism deserves.   Along with other world religions the Free Church believes that humanity exists in two genders: male and female, which are assigned in the womb.  In equating the teaching of transgenderism with ‘state sponsored child abuse’, Mr Robertson is simply restating views which several others have publicly voiced as part of the nationwide debate”

Whilst I appreciate the support the trouble is that this is somewhat of a neutral statement which did not answer the direct question.   According to the Free Church I was simply ‘expressing myself’ and ‘restating views’ that others had.

Gender is ‘assigned in the womb’?  By whom and when? This is using the language of Queer Theory which speaks of gender being non-biological and ‘assigned’ at birth.    Secondly we were not talking about the teaching of transgenderism (itself a strange concept – when did transgenderism become a philosophy?) but the notion of Queer Theory and the view that gender is a social construct which enables us to choose and change our gender as we please.  It is actually important in this discussion to distinguish between transgender people and the philosophy of Queer Theory on which much of the current understanding is based.   I actually accept that there is such a thing as Gender Identity Disorder and that there are people who are transgender and need help and support.  My article was entitled ‘What would Jesus do about transgender?”  and the answer was ‘help the people, but challenge the philosophy on which it is based’ – it is the philosophy which I regard as demonic, not the people.  Transgender people are welcome in St Peters – as they should be in every church.

Anyway the Churches press release was a political statement which left the press with the view that I was on my own. As a statement of support, it was at best, vague, confused and lukewarm.  Incidentally I don’t doubt that the Church does support and agree with the views expressed.  Of course it may be that I have got this completely wrong and they did say so but I’m just too naive/oversensitive to have picked up the nuanced and well worded support!  If so I confess that a) I’m not very good at code and b) I’m not sure the church should be speaking in code.

As an example of how this story then gets picked up take the Daily Express yesterday:

This was a grossly inaccurate and unhelpful piece –  including quotes I didn’t make and a selective quote from the ‘spokesman’ for the Free Church (as an aside I hate this practice of having anonymous spokespeople – why not just be open and state who we are?  Mind you this was press release by committee so I suppose it is fair enough)….I have asked the editor for a right of reply.

I am writing to express my concern about an article by Richard Elias in todays paper about me which contains gross inaccuracies.

You put the following in quotes”

I did not say either of those statements and regard them as ridiculous. So why do you have them in quotes? Furthermore and more seriously I did not say that “the unhappiness of some trans people may be their own fault”.

I should also point out that the Free Church issued a statement which supported me and yet you chose a selective quotation from the end which does not give that impression.

I would be grateful if you could correct these mistakes ASAP. As they are lies and detrimental to me (if you have ever had to face the wrath of trans activists you will know the seriousness of this). I have no desire to go to the press complaints council but will be compelled to do so if the corrections are not made.

I would also be grateful if you would allow me to write an article in response to your inaccurate and misleading piece.

I could continue in similar vein (and there is much more in the press – including a wonderfully condemnatory piece from Pink News)  but my chariot awaits.  I am so glad to be heading out of the storm.

We always learn the best lessons in adversity – especially when we make mistakes.  For me there are two mistakes I have made which I will need to reflect on.  I think I was foolish in two areas.

The Church is of course the people, not the institution, and so yesterday it was good to have an elderly lady phone me up (not knowing anything of what was going on) to tell me that she had been praying for me and that the Lord had laid upon her heart these words which she felt she had to phone and tell me.

I have loved you with an everlasting love,
I have drawn you with unfailing kindness
I will build you up again.

“But all who devour you will be devoured
All your enemies will go into exile
Those who plunder you will be plundered
All who make spoil of you I will despoil
But I will restore you to health and heal your wounds, declares the Lord
because you were called an outcast, Zion for whom no one cares

The Lord’s timing is perfect!