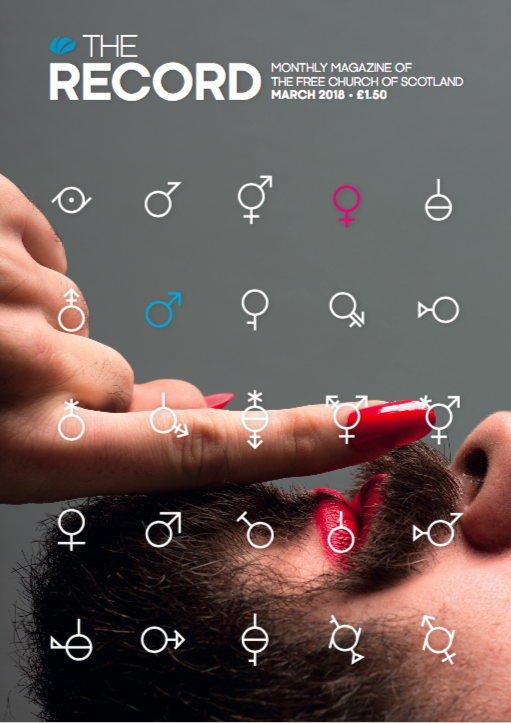 The March Record  is now out.  You can order copies from your local Free Church or the Free Church offices – or from any Christian bookshop that stocks it.  You can now also get it online for a bargain £1.50 (or your currency equivalent)….Click on the Issuu link here –

Its interesting that I have already had The Times asking for a further quote because they are going to do a story on it – after Rev Mark Strange, Primus of the Scottish Episcopal Church, issued a statement critical of my editorial.   I was surprised – not at the fact that he commented against my article (Mark after all is leading the SEC, despite the faithful ministers and people still within it, in an increasingly unbiblical direction), but rather that he actually reads The Record – as apparently does The Times!   The following is the article he was so upset by.

What Would Jesus Do About Transgender?

The Free Church is being asked this month to respond to the Scottish Government’s consultation on gender identity recognition. How will we respond? It’s important to recognise that when the Scottish Government uses the term consultation, they don’t use it in the normal way: seeking advice in order to obtain information so that a decision can be made. The Scottish Government have already made the decision, and given the way that modern politics works, they won’t permit their MSPs to disagree or go against the pre-determined outcome. However, the Church will respond and pray that some of our politicians will come to a rational, humane and loving decision.

How do we make our decision? For some this may be a bit simplistic, but we ask the head of the Church. What would Jesus do about transgender? Some might say he would do or say nothing. After all, he says nothing in the Bible on the subject – it has to be said that it is not particularly clear that this was a burning issue in 1st-century Judea! Then we must not forget the danger that the Church gets distracted from the gospel and gets obsessed with what the culture is obsessing about (every day this week almost every newspaper and media outlet has had stories on this one issue). Whilst we must not do that, nevertheless we do need to speak into that culture, and we do need to speak truth to power…so WWJD?

1) Jesus would treat people with respect and kindness. Yes, he got angry (at the money changers and the religious hypocrites), but ‘the bruised reed he would not break’. For that reason the Church, and all Christians, must be totally opposed to any bullying or unkindness for any reason. We must never demonise or denigrate any person or group of people – even, or perhaps especially, when we fundamentally disagree with them. Of course Jesus is concerned about bullying. But it is precisely because he loves people that he wouldn’t just accept that brokenness and depression amongst trans people is because of bullying. Maybe it is because, for some people, being trans itself causes so much unhappiness? – so in that case we need to ask, is it loving to encourage something which leads to so much unhappiness? Maybe doing the ‘nice’, and easy, thing in this case – avoiding the hard and complex questions – is not actually the kind and good thing to do?

3) Jesus would reaffirm his Father’s teaching – Because therein lies the rub. He told us that we can’t just pick ‘n’ mix the bits we like out of the Bible. The very verse that establishes the whole basis of human equality is the verse that tells us that human beings were created male and female. There are two genders – not 71 (Facebook take note!). And human beings are not ‘assigned a gender at birth’ by society. We are born that way. And yes, I recognise that life isn’t always that simple and that there are those who feel as though they were born in the ‘wrong body’ and that there are a tiny percentage of people who are intersex and who need help because of that – but what we are talking about here is the demonic ideology that we can pick and choose and change our gender. Gender is not a societal construct but a God-given fundamental of humanity. Jesus, as the one through whom all things were made, is not going to go along with the idea that humanity can now re-make itself, without the plans and designs that God gave. Whilst some Protestant churches are confused on this issue and just seem to be following the culture, the Catholic Church has, as is often the case on social issues, been much more robust. Several years ago Pope Benedict made it very clear how important the issues at stake were – he rightly saw the current fad as a real threat to the future of humanity. ‘The words of the creation account, “male and female he created them” (Gen 1:27), no longer apply. No, what applies now is this: it was not God who created them male and female – hitherto society did this, now we decide for ourselves. Man and woman as created realities, as the nature of the human being, no longer exist.’

4) Jesus would be especially hard on those who bring harm to children. He warned that the lowest place in hell was reserved for them. That’s why child sexual abuse within the church is such a hellish abomination. It’s also why the Christian Church must stand up against the current fanatical ideology of the trans theorists who deny that biology and gender are connected and who think that we can just tell little children that they can choose their own gender. Many people have pointed out already (including those who have been involved in this field for many years) that what is now happening is in danger of becoming state-sponsored child abuse.

5) Jesus would speak the truth. In love. Real love. Sacrificial love. He wouldn’t just go along with the culture so that people wouldn’t think he was nasty. He wouldn’t be concerned about preserving his ‘position’ in society. He wouldn’t be afraid of speaking the truth just because people would accuse him of evil. But neither would he speak with bitterness, frustration and fear. Having entrusted himself wholly to his heavenly Father, he would get on with proclaiming his word and seeking and saving those who are lost. WWJD? I don’t think he would issue minority reports, panic or despair. I don’t think he would begin political campaigns. But neither do I think he would compromise at all on the truth of his Word. Heaven and earth would pass away before that happens! He would continue his prophetic, priestly and kingly role. And we must do the same. We announce the Word like prophets to our culture – whether they like it or not.

We intercede with fervent prayers for the confused, hurt and broken people in our society, recognising that we are they. And we proclaim the kingship of Christ above all that the political leaders and opinion-formers of our culture tell us is now the absolute truth. It is his will that will be done, not theirs. They are on the wrong side of His-Story. We work on – against the odds – but with the joy and peace that comes from knowing that in the end the Judge of all the earth will do right and that the creation will be renewed, not destroyed. The Free Church will respond to the Government’s consultation. We will point out the harm that this fad is doing and will do to children and adults. We know that our position will receive ridicule and abuse – anyone who has ever dared challenge any Transactivist knows the hatred and the bile that they will receive. But we will not hate or abuse back. We recognise in all human beings the image of God and the brokenness of the Fall. We challenge those harmful ideologies which undermine the Word of God, and by so doing attack the person of Christ and harm his creation. We need to listen, learn and love. As the Church of Jesus Christ we must be fearless in proclaiming the love of Christ in a confused and lost world. We must not compromise his love by adapting it to suit ourselves or the current zeitgeist. Christ is too precious for that…and our culture is in such a desperate state that it needs the Christ of the Bible, not our own personal Jesus.