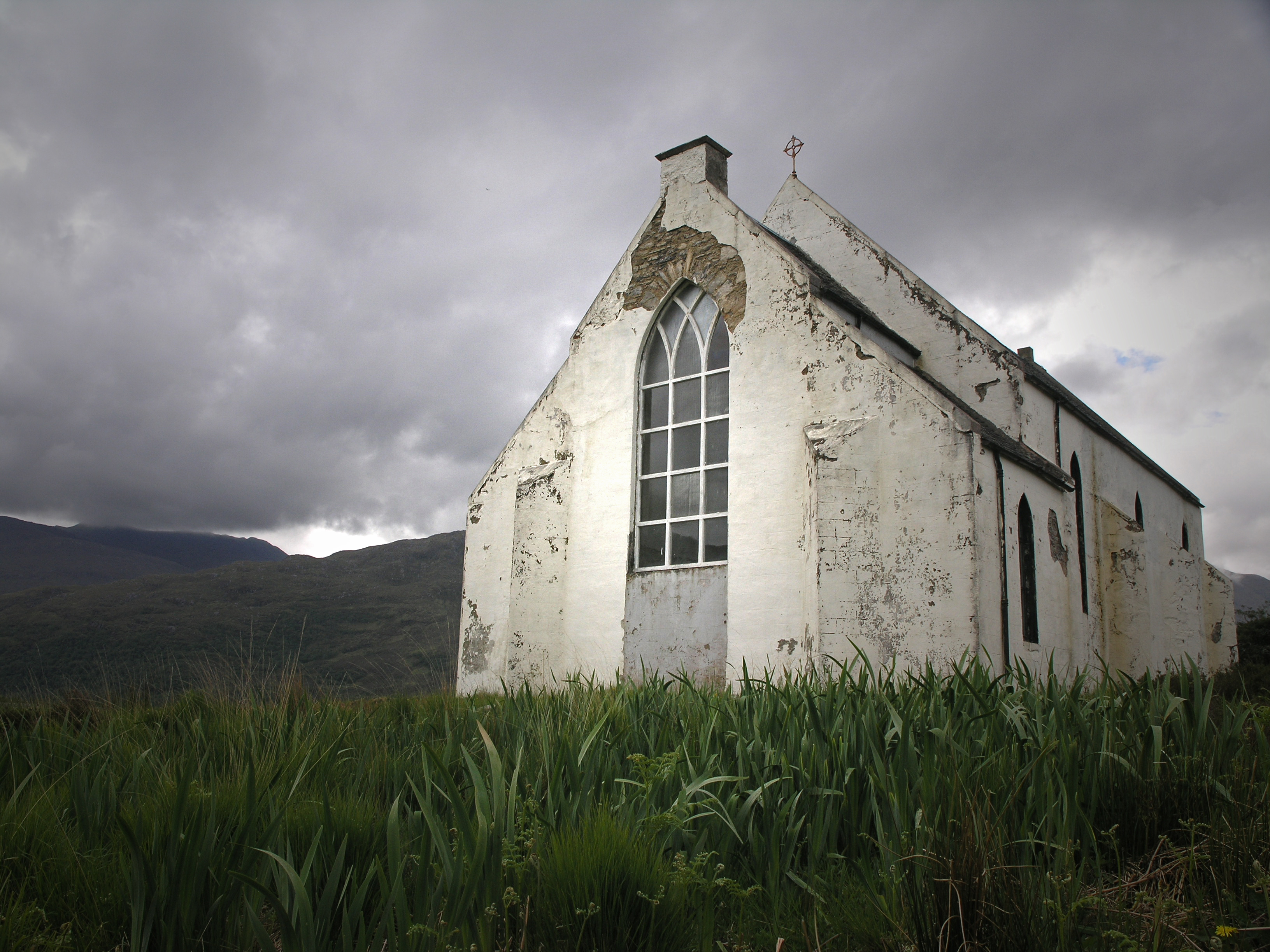 Scotland this morning, to the unrealism, arrogance and apathy of much of what I came across today….it breaks your heart.   And the death of Billy Graham has affected me more than I thought it would.     I long to see renewal and revival.

15 years ago I wrote my first book – Awakening – the life and ministry of Robert Murray McCheyne.  I reproduce ch.19 below (you can have that for free but you can get the book from Christian Focus Publications, St Peters, or Amazon – if you buy it from St Peters all the proceeds go towards our renewed building). Reading it through again it struck me how the predictions contained within it have turned out to be right. Its also interesting to see how some of the figures have changed.  I add the up to date ones after the 5 year old ones!

“If the Church is to fall under the iron foot of despotism, God grant that it may fall reformed and purified; pure in its doctrine, government, discipline and worship; scriptural in its spirit; missionary in its aim, and holy in its practice; a truly golden candlestick; a pleasant vine.”

The fruit of McCheyne’s ministry and radical reformation of St Peters continued long after his death. In 1855 the congregation had grown to the extent that they started a mission church two hundred yards up the Perth Road at the top of Taylors Lane. This work prospered and in 1870 McCheyne Memorial Church was opened by the well known Baptist preacher, C H Spurgeon. Yet move forward to the present day and this church has now closed and been sold to a Muslim businessman.

Furthermore the same fate almost befell St Peters itself. What caused such a state of events? How could a Church which had prospered so well and had such a radical and long-lasting impact on the city of Dundee get to a stage where it had almost disappeared? What about Scotland as a whole?

At the time of McCheyne’s death the outlook for the gospel in Scotland looked good. Indeed there was a time of considerable prosperity for the next 25 years. After the Disruption hundreds of churches were built, overseas missions flourished and evangelicals ran Scotland’s cities. But today there remains very little of that. What went wrong?

We need to recognize the wider changes within church and society. In 1780 Scotland was a reformed Calvinist country with a national church and a covenanted people, a people of the Book. At least that was the outward situation where the State was in alliance with the Reformed Church. The rapid urbanization of the early 19th century and the impact of the French Revolution meant that all this changed. However it seems as though rather than this urbanization leading to secularization it, in fact it led to an evangelical revival.

By the 1820’s 30% of the people were Presbyterian dissenters and of those who were not a considerable proportion, were caught up in the evangelical revival within the Established Church. The concept of the Godly Commonwealth, or the Covenanted nation, was largely gone – but for a period of almost a century after McCheyne’s death, the church continued to enjoy great prosperity – at least numerically.

Many would regard such a decline as merely symptomatic of something that has occurred in other areas of Britain. The mantra for many sociological and historical observers was the ‘industrialisation leads to secularisation’. Thus the theory goes as Scotland moved from being primarily a ‘primitive’ agricultural society to a more ‘sophisticated’ industrialized one, then religion has become increasingly irrelevant and sidelined. This theory would teach that the Church in Scotland has in reality been in decline since the end of the 17th century!

However recent research most notably by Calum Brown of the University of Strathclyde, has demonstrated that theory to be false. The Church in Scotland did not actually begin to numerically decline until after the Second World War. The Church of Scotland actually peaked its membership at 1.2 million in the 1950’s. But the decline since then has been little short of phenomenal. Today the Church of Scotland has less than 600,000 members (2018 – 300,000) with an attendance on any given Sunday of little more than 25% of that. The Church losing 20,000 members per year (if a typical congregation were to have 400 members that is 50 churches per year).

Recent figures suggest that the Sunday School movement – once the source of so many of the Church’s members – were be largely finished by 2011. (This prophecy has largely been fulfilled).  Why has this happened? The roots of the decline go back to the 19th century. There was a degree to which the success of the evangelicals lead to their downfall. Prosperity bred pride and a certain amount of complacency. The major difficulty came with the rise of the Higher Critical movement which began to be taught in the Free Church colleges. As a result faith in the Bible as the Word of God was subtly undermined. For a while that did not seem to matter as long as the church prospered and the gospel was preached. However when the challenges of the 20th century arrived the spiritual, moral and intellectual foundation of the church had been undermined – with the result that the Church in Scotland was not able to stand up to the waves of materialism, secularization, other philosophies and religions, that swept in. The shell remained but in many cases the backbone and the heart was gone. The Church in general has had little answer to the challenges placed by the secularization of modern society.

This is where we have a great deal to learn from the past. McCheyne laboured in an industrialized society and yet saw great prosperity for the gospel. Indeed McCheyne is only an example of a group of like minded evangelicals who were remarkably successful in reaching the cities of Scotland, both the middle class and the urban poor. Perhaps we might consider ourselves to be more sophisticated but there is much to be learnt from these men and women who laboured in hard circumstances and yet with such impact.

The Church in Dundee declined because it lost its radical cutting edge. There was

little outright liberalism but the thoroughgoing radical evangelical theology of McCheyne was replaced by a broader watered down evangelicalism which lacked the cutting edge so clear in McCheyne’s day. There has been an attempt to suggest that McCheyne was not really theological and that what matters was not so much his theology as his passion and his concern for souls. It is a division which he would not recognize. He was profoundly theological – believing that theology was not something dry and academic- fit only for those whose delight was in arguing about philosophical obscurities. Rather theology was about Christ and it was therefore essential for that theology to be accurate, precise and clearly expressed. It was the theology that acted as the foundation and the skeleton for the works and love which McCheyne so ably expressed.

The decline of St Peters indicates what happens when theology is ignored or sidetracked. A Church without walls or foundations ends up being a church which collapses. When the flood of secularism and modernism finally came in the Church was unable to stand up under it because for decades the foundational truths had been undermined. Sadly neither modernist nor traditionalist nor legalist were able to cope.

Whilst there were those who had lost confidence in the Bible and were desperately trying to keep up with the times and be culturally relevant ( of course by the time the Church caught up the rest of society had moved on!), there were a smaller group, who although they expressed confidence in the Bible, had lost all faith in its ability to transform and change the city. They had developed a ‘remnant’ mentality whereby they drew their wagons in a circle, looked inwards, and hoped to survive ‘until the Lord came’. Their language was evangelical, their doctrine ‘sound’ and many led exemplary life’s. But their pietistic theological defeatism and narrowness has ended up being as destructive to the church as the liberalism of the modernists.

Thus it is a joy to escape from the liberalism and legalism of the 20th century church into the faithfulness and life of 19th century men such as McCheyne. They believed passionately in the truth of the Bible. But to them it was a truth to be shared, lived, proclaimed and practiced. They would no more think of a church which did not practice good works than they would think of a Church which did not teach the Bible. They did not believe in the marginalization of the Church and they certainly did not accept the public/private divide that is the modern view of religion. For example when McCheyne was inducted to St Peter’s the reception given in his honour was attended by members of the city council, including Provost Brown. At the reception itself, Roxbourgh, the minister of St John’s, mentioned and prayed for the recent slump in commerce in Dundee. The Church had not given up on the Gospel and turned to politics. But neither had it given up on the city and turned in on itself.

Some would argue that the above analysis is too simplistic and that any attempt to copy McCheyne and St Peter’s in the 19th Century would be a disaster in the 21st. That would of course be true if we were to seek to recreate the conditions of the 19th century. But the basic principles can and do work. The current St Peter’s Free Church congregation has sought to put those principles across in a way which is contemporary and biblical (that of course being one of the principles!). Whilst we have a long way to go it is interesting that the congregation has grown from eight to eighty (2018 – this figure is now 300 and we have planted a church in St Andrews and are starting another one in Dundee)  and that most of these are young people who have a hunger for the Word of God.

If we want to see renewal and revival in the 21st century church we need to learn from our past. We need great teaching – good precise Christ centred biblical theology – orthopraxis – a concern for the whole city and not just our particular congregation and a God honouring worship which remembers that without the Spirit we have nothing. If McCheyne can stimulate us into seeking to bring Christ to the people of our cities, towns and villages then it may yet be that his legacy will be greater in the future than it has been in the past.

Do you agree with the analysis above? How can we keep the Church from making shipwreck on the twin rocks of legalism or liberalism? What lessons from McCheyne do you think that we can learn today?

O Lord, How heavy our hearts are when we see the spiritual state of Scotland today! Or at least they should be! Wherever we live give us a heart for our community and a desire to see you glorified in that community. Forgive your church and renew it. Enable us to be faithful to your Word and to follow your Son wholeheartedly. Amen.