This article was published on Christian Today with the following title:

Why, as a Christian, I welcome Richard Dawkins and ‘The God Delusion’ taking to the stage

It’s finally happened. Richard Dawkins’s The God Delusion (TGD) is to be put on the stage. Chorlton Arts Festival in England is going to have the first theatre version of the best selling atheist book.

I think it is a highly appropriate idea for TGD, which is after all an entertaining piece of propaganda, rather than a serious academic work. In fact I can’t wait for the film version and perhaps the spin off series. Fans of TGD regard it with all the reverence of holy writ and see it as a life-changing book that ‘should be placed in every school’ (nothing like a little atheist indoctrination!). Dawkins’s own website had a ‘converts corner’ where people could give their testimony about how they ‘saw the light’.

The God Delusion will premiere at Chorlton Arts Festival in May.
Thomas Moore, the artistic director of the company that will perform the play certainly thinks it is a transforming work. ‘The only way to describe the show is a light-hearted journey through the sound reasoning that the book so brilliantly details,’ he said. ‘It’s somewhere between an atheist support group and watching a great stand-up comedian. We hope that when people leave the show they feel changed.’

I have to confess that I too found reading The God Delusion a life changing experience. Not because I was persuaded by its arguments – which are largely a rehash of Bertrand Russell’s Why I am not a Christian. In fact as atheist books go it’s an embarrassment to many thinking atheists (there are some!). Prospect magazine which had earlier voted Dawkins as one of the top three intellectuals in the world had a scathing review:

‘It has been obvious for years that Richard Dawkins had a fat book on religion in him, but who would have thought him capable of writing one this bad? Incurious, dogmatic, rambling and self-contradictory, it has none of the style or verve of his earlier works.’

TGD was a life changing experience for me because after I had read it, I wrote an online article which was picked up by the Dawkins website. Because of the response I got on the Dawkins website I continued to write replies to TGD which eventually were published as The Dawkins Letters. 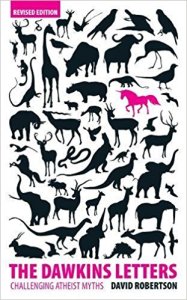 This became a surprise bestseller and opened up many doors for me to speak and share the Gospel in secular settings. Dawkins himself was not too pleased and called me a ‘flea’ thus giving me my alias – the wee flea (in honour of my Scottish Presbyterian denomination).

Its all highly entertaining knockabout stuff. So maybe this is excellent material for a theatre show?

The fascinating thing about TGD is that the devotion its adherents give to it is more akin to religious revivalism, than to any ‘oasis of reason’. I once spoke at the Stornoway book festival, at which Dawkins was also speaking. If anyone were to listen to the two lectures we gave and compare the responses you would think that Dawkins was the preacher. Both lectures were packed out, but whilst mine was a relatively calm affair, Dawkins was more like a revivalist meeting. ‘There is no God’ said the atheist evangelist: cue rapturous and ecstatic applause.

As well as the religious devotion what also struck me was the anger. The New Atheists (as they liked to self-identify) seemed to have as their motto, ‘There is no God, and I hate him!’. Dawkins would often begin his revivalist rallies in the US with the reading from the third chapter about the God of the Old Testament being ‘arguably the most unpleasant character in all fiction’. Again to rapturous applause. Listening to these rallies it seemed as if they were like large therapy sessions for people recovering from religious abuse! ‘Hi…my name is Richard…and I am an atheist’.

I developed my own term for this new atheism, complete with its four prophets the self-styled horsemen of the atheist apocalypse, (Dawkins, Christopher Hitchens, Sam Harris and Daniel Dennett): New Fundamentalist Atheism. The New Fundamentalist Atheists (NFA) were angry, dogmatic and did not take kindly when anyone apostatised from their faith. When one of the old atheists, Anthony Flew, announced ‘There is a God’, they went berserk, accusing him of senility at best and betrayal at worst. Others have had the same experience – the atheist heresy hunters will not brook any dissent from their dogma. One such was Richard Morgan who had a rather special conversion through interaction on the Dawkins website. He wrote in a chapter in a later edition of The Dawkins Letters, (called ‘Salvation came through Richard Dawkins’): ‘As I considered my perception of life, the universe and everything, it was literally as if I had been looking at a two-dimensional image in black and white, and in an instant everything became three dimensional and Technicolor’. Poor Richard was immediately identified as having some kind of mental disorder.

Those of the atheist faith – or at least of the NFA sect – tend to use the same arguments all the times. They have their creed and mantras – one of which is ‘atheism is just the lack of belief in God, like people have a lack of belief in fairies’. If that were true then why has a retired businessman, Louis J Appignani, given $2.2 million to endow the USA’s first atheist academic chair – a post that it was announced this week has just been filled? Dawkins of course welcomed this chair: ‘I think it’s a very bold step of the University of Miami, and I hope there will be others’. Perhaps someone could explain how you can have an academic chair just to study the lack of belief? Will Mr Appignani be funding the Afairiest chair?

No – atheists have their faith positions, their doctrines, their books and – a la Richard Dawkins – their evangelists. It is therefore entirely appropriate that they now have their own theatre show. If only they could find some decent atheist music they could be on to something!

Meanwhile as a Christian I am very thankful for Richard Dawkins. He has enabled many more people to hear the Christian Gospel and to see the inadequacies of the atheist faith. I hope and pray that one day he too will come to see that atheism is an unreal delusion and that he will come to know the truth he so vehemently seeks to deny.

Speaking of atheist music – or the lack thereof – my friend Angela, reminded me of this classic from Steve Martin….

The Dawkins Letters – A Finnish Appreciation

Should Christians be Nice in dealing with Nasty Atheists