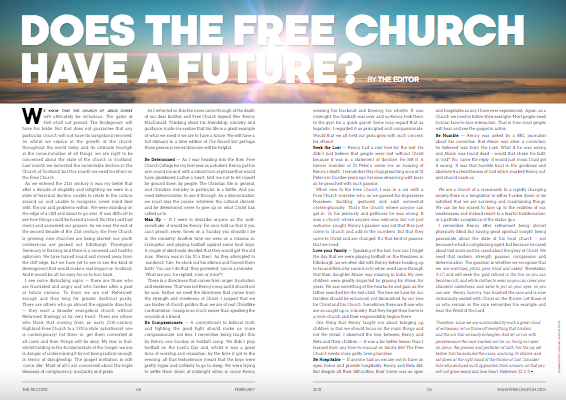 This is the editorial from the Feb edition of The Record

We know that the Church of Jesus Christ will ultimately be victorious. The gates of Hell shall not prevail. The Bridegroom will have his bride. But that does not guarantee that any particular church will not have its lampstand removed. So whilst we rejoice at the growth of the church throughout the world today and its ultimate triumph at the consummation of all things, we are right to be concerned about the state of the church in Scotland.

Standing on the Cliff Edge

Last month we lamented the lamentable decline in the Church of Scotland, but this month we need to reflect on the Free Church. As we entered the 21st century it was my belief that after a decade of stupidity and infighting we were in a state of terminal decline, unable to relate to the culture around us, and unable to recognise, never mind deal with, the sin and problems within. We were standing on the edge of a cliff and about to go over. It was difficult to see how things could be turned around. But the Lord had mercy and answered our prayers.

A Renewed and Healthy Optimism

As we near the end of the second decade of the 21st century, the Free Church is growing, new churches are being started, our youth conferences are packed out, Edinburgh Theological Seminary is thriving and there is a renewed and healthy optimism. We have turned round and moved away from the cliff edge, but we have yet to see to see the kind of development that would make a real impact on Scotland. And it would be all too easy for us to turn back.

I see some disturbing signs – there are those who are frustrated and angry and who hanker after a past or future nirvana. To them we are not ‘Reformed’ enough and they long for greater doctrinal purity. There are others who go almost the opposite direction – they want a broader evangelical church without Reformed theology at its very heart. There are others who think that moving from an early 20th-century Highland Free Church to a 1950s style ‘salvationist’ one is contemporary! Get them in, get them converted at all costs and then things will be okay. My fear is that, whilst holding to the fundamentals of the Gospel, we are in danger of undermining it by not being radical enough in terms of discipleship. The gospel invitation is still ‘come, die’. Most of all I am concerned about the triple diseases of complacency, insularity and pride.

A Timely Death of a Great Example

As I reflected on this the news came through of the death of our dear brother and Free Church legend, Rev. Kenny MacDonald. Thinking about his friendship, ministry and guidance made me realise that his life is a great example of what we need if we are to have a future. We will have a full obituary in a later edition of The Record but perhaps these personal remembrances will be helpful.

1) Be Determined – As I was heading into the then Free Church College for my first year as a student, Kenny put his arm round me and, with a robust turn of phrase that would have gladdened Luther’s heart, told me not to let myself be ground down by people. The Christian life in general, and Christian ministry in particular, is a battle. And you need determination to see it through. As a denomination we must stay the course, whatever the cultural climate, and be determined never to give up on what Christ has called us to.

2) Man Up – If I were to describe anyone as the ‘anti-snowflake’ it would be Kenny. He once told us that if you can’t preach seven times on a Sunday you shouldn’t be in the ministry! Another time we were on a mission in Livingston and playing football against some local boys. A couple of skinheads decided that they would get ‘the old man’ (Kenny was in his 50’s then). As they attempted to ‘sandwich’ him, he stuck out his elbows and floored them both! ‘You can’t do that,’ they protested, ‘you’re a minister.’ ‘What are you,’ he replied, ‘men or mice?!’ There is a directness that comes from anger, frustration and weakness. That was not Kenny’s way and it should not be ours. Rather we need the directness that comes from the strength and meekness of Christ. I suspect that we are fonder of church politics than we are of real Christlike confrontation. Gossip is so much easier than speaking the wounds of a friend.

3) Be Compassionate – A commitment to biblical truth and fighting the good fight should make us more compassionate, not less. I remember being taught this by Kenny one Sunday at football camp. We didn’t play football on the Lord’s Day and, whilst it was a great time of worship and relaxation, by the time it got to the evening, all that testosterone meant that the boys were pretty hyper and unlikely to go to sleep. We were trying to settle them down at midnight when in came Kenny wearing his tracksuit and blowing his whistle. It was midnight, the Sabbath was over, and so Kenny took them to the gym for a quick game! Some may regard that as legalistic; I regarded it as principled and compassionate. Would that we all held our principles with such concern for others!

4) Seek the Lost – Kenny had a real love for the lost. He didn’t just believe that people were lost without Christ because it was in a statement of doctrine. He felt it. A former member of St Peter’s wrote me on hearing of Kenny’s death, ‘I remember this chap preaching once at St Peter’s in Dundee years ago, his eyes streaming with tears as he preached with such passion.’ When new to the Free Church I was in a car with a Free Church minister who, as we passed the impressive Rosskeen building, gestured and said somewhat contemptuously, ‘That’s the church where anyone can get in.’ In his jealously and pettiness he was wrong. It was a church where anyone was welcome, but not just welcome, sought. Kenny’s passion was not that they just come to church and add to the numbers, but that they came to Christ and are changed. It’s that kind of passion that we need.

5) Love your Family – Speaking of the lost, how can I forget the day that we were playing football on the Meadows in Edinburgh (as we often did with Kenny before heading up to his and Reta’s for some lunch) when word came through that their daughter Alison was missing in India. My own children were greatly impacted by praying for Alison for years. We saw something of the heartache and pain as the father searched for the lost child. The love we have for our families should be enhanced, not diminished, by our love for Christ and his Church. Sometimes there are those who are so caught up in ‘ministry’ that they forget their home is a mini-church and their responsibility begins there. One thing that Kenny taught me about bringing up children is that we should focus on the main things and not the trivial. I observed the love between Kenny and Reta and their children – it was a far better lesson than I learned from any how-to manual on family life! The Free Church needs more godly, loving families.

6) Be Hospitable – If anyone had an excuse not to have an open home and provide hospitality, Kenny and Reta did. But despite all their difficulties, their home was as open and hospitable as any I have ever experienced. Again, as a Church we need to follow their example. Most people need human face-to-face interaction. That is how most people will hear and see the gospel in action.

7) Be Humble – Kenny was asked by a BBC journalist about his conviction that Alison was alive, a conviction he believed was from the Lord. What if he was wrong and Alison was found dead – would that shake his faith in God? ‘No,’ came the reply, ‘it would just mean I had got it wrong.’ It was that humble trust in the goodness and absolute trustworthiness of God which marked Kenny out, and should mark us.

A Church at a Crossroads

We are a church at a crossroads. In a rapidly changing society there is a temptation to either hunker down or be satisfied that we are surviving and maintaining things. We can be too scared to face up to the realities of our weaknesses and instead resort to a fearful traditionalism or a pathetic acceptance of the status quo. I remember Kenny after retirement being almost physically blind but having great spiritual insight, being passionate about the state of his local church – not because he had a complaining spirit, but because he cared about lost souls and he cared about the glory of Christ. We need that realism, strength, passion, compassion and determination.

The question is whether we recognise that we ‘are wretched, pitiful, poor, blind and naked’ (Revelation 3:17) and will seek the ‘gold refined in the fire, so you can become rich; and white clothes to wear, so you can cover your shameful nakedness; and salve to put on your eyes, so you can see.’ ‘Kenny Sammy’ has finished the race and is now victoriously seated with Christ on the throne. Let those of us who remain in the race remember his example and hear the Word of the Lord:

Therefore, since we are surrounded by such a great cloud of witnesses, let us throw off everything that hinders and the sin that so easily entangles. And let us run with perseverance the race marked out for us, fixing our eyes on Jesus, the pioneer and perfecter of faith. For the joy set before him he endured the cross, scorning its shame, and sat down at the right hand of the throne of God. Consider him who endured such opposition from sinners, so that you will not grow weary and lose heart. Hebrews 12:1-3

We have started a new experiment with The Record – as of next month we will be putting it online (for subscribers) as well as continuing the print edition.  You will be able to subscribe to a digital only version or those who have a print subscription will also be entitled to have a free digital subscription.   Here is the first one for free.  Can I encourage you to subscribe!   Even if you are not Free Church  or Scottish – most of the articles and stories will apply across denominations and cultures (for example this month we feature Hawick Baptist church…Korea…..training leaders….discipleship etc).

The Church in Scotland – The Record Editorial for January