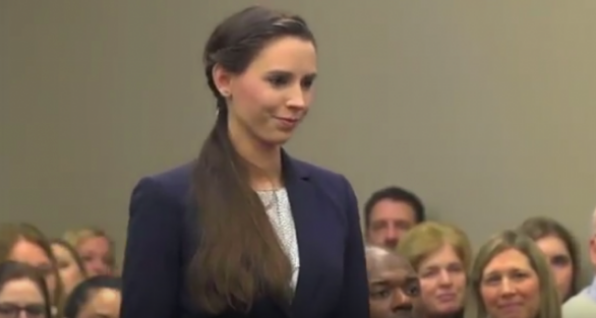 Rachael Denhollander is my new heroine. I’m not sure I’ve ever seen anything quite as brave, compelling, articulate and gospel centered as her testimony in the Larry Nassar trial. But it’s what I read later in an interview the former gymnast gave to Christianity Today in the US that really got to me. She said: ‘Church is one of the least safe places to acknowledge abuse because the way it is counselled is, more often than not, damaging to the victim. There is an abhorrent lack of knowledge for the damage and devastation that sexual assault brings.’

Denhollander talks about how she lost her church for speaking out against sexual abuse. This is absolutely horrific. Why would churches find it so difficult to deal with cases of sexual abuse? Is it because of the ignorance of what real sexual abuse is? A lack of expertise in being able to determine what has actually happened? Or inadequate child protection policies in churches?

This is where poor theology really lets us down. If we believe what the Bible actually says about human nature being depraved, why should we be surprised when we find evidence of that?

‘Jesus Christ does not need your protection, he needs your obedience

As Denhollander (who is herself an excellent theologian) points out: ‘Jesus Christ does not need your protection, he needs your obedience.’ It’s an obedience that requires us to seek justice, speak the truth and offer the ‘tough love’ of the gospel, even if this means upsetting some within the church or the organisation.

Christian organisations, often based around the personality, gifts and charisma of one leader, are particularly prone to being defensive about that leader. After all if his reputation is destroyed, so is the organisation. It’s not so with the church, unless we happen to have fallen into the trap of thinking that the church belongs to our particular leader.

But it’s here that too many churches have abandoned something that would really help them in dealing with this issue, a key foundational principle of the New Testament church – church discipline. This is not about the powerful lording it over the weak. It is about the weak being offered the protection of the church. If we are a biblical church we recognise that even the great leaders (like David, Moses and Peter) can fall. We are not concerned about preserving the reputation of our own local leaders because we recognise only one absolute Shepherd, Jesus Christ – and we accept what he says about all under shepherds being fallible. Rachael Denhollander should have found safety, security and justice within the local church. Instead she experienced what can only be described as further abuse.

This is not the same as saying that everyone who is accused of sexual abuse is automatically to be regarded as guilty. It’s far too easy to destroy the lives of people by making false claims. If you want to destroy a ministry – even just making the accusation is sometimes enough to give the desired result. Of course there must be due process, evidence and fair trial. Paul tells Timothy: ‘Do not entertain an accusation against an elder unless it is brought by two or three witnesses‘(1 Timothy 5:19). In other words there must be clear evidence, which is often very difficult in these kinds of cases.

But Paul then goes on to say: ‘But those elders who are sinning you are to reprove before everyone, so that the others may take warning. I charge you, in the sight of God and Christ Jesus and the elect angels, to keep these instructions without partiality, and to do nothing out of favouritism.’ Once we are aware of the accusations, and the evidence, we are not to shirk away from dealing with matter openly, biblically and in accordance with the law of the land.

In that latter regard we need to stay away from the vigilantes and the virtue signallers; those who don’t hesitate to conduct trial by social media and who get a kick out of thinking they are ‘in the know’ and have the ability to act as judge and jury. Just because you get an e-mail offering selected insider ‘evidence’ does not mean that you know. The abuse of justice in any form is wrong. As is the sad practice of ambulance/fame chasers who will even use fake claims of sexual abuse for their own gain.

However the presumption of innocence, and the possibility of false claims, should not mean that we do not listen to those who are making accusations, as though we are operating on the basis that the accused could never be guilty. We must listen carefully and sympathetically to those who bring accusations – and we must deal with the accusations clearly, lovingly, openly and justly. This is so important. I can hardly think of anything more offensive in the eyes of God, than the abuse of children.

Denhollander asks, ‘How much is a little girl worth? How much is a young woman worth?‘ Jesus gives the answer. It should be our answer too:

‘If anyone causes one of these little ones – those who believe in me – to stumble, it would be better for them to have a large millstone hung around their neck and to be drowned in the depths of the sea. Woe to the world because of the things that cause people to stumble! Such things must come, but woe to the person through whom they come!’ (Matthew 18:6).

‘See that you do not despise one of these little ones. For I tell you that their angels in heaven always see the face of my Father in heaven’ (Matthew 18:10).

Denhollander is now in a Reformed Baptist church and speaks openly of the grace, forgiveness and justice of God. She testifies that there is healing for those who have been abused – and the possibility of healing and forgiveness for those who have done the abusing (yes – the gospel does go that deep) – but not without genuine repentance and confession. She is a testimony to the power of truth. God grant that we would all listen to her brave words.

This is a harrowing testimony – its worth listening to the whole thing – but if you don’t have the time – listen from about the 26th minute…its astounding.