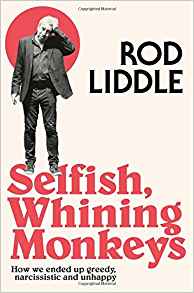 “children are not, in general, capable of making sensible decisions which impact upon their future. They make decisions based upon the here and now. They are not old enough to take the long-term view.” Page 89.

“The children – the students – emerge, as a consequence, with a highly developed, perhaps unreal, sense of entitlement. They have not been corrected; they have instead been indulged. The world, later, will come as a shock to them, I think.” Page 93.

“It is the poorest kids who suffer most from this modernist approach to education. Middle-class children have the amenities, the infrastructure at home to compensate. The poorest kids depend upon school as their sole conduit of learning. A policy, or ideology, designed to improve the chances of the least well-off as had the results of penalising them still further.” Page 94.

“British kids, then, are squeezed by ideologies from the left and the right. From the left: you are your own masters, sort out right from wrong and take no shit from supposed figures of authority. From the right: live, consume, die.” Page 96.

“We do not wish for them to be bored, of course, and we think that we can buy boredom from them with consumer durables, corporate entertainment and early evening courses in tae kwon do.”Page 97.

“The children born in 1970 to working mothers were much more likely to fail educationally, more likely to be unemployed, more likely to suffer psychiatric problems or mental stress than those born to mums who stayed at home and looked after their children. Irritatingly, the amount of time a dad was at home with the kids mattered not one jot. It was the mother who was important.” Page 106.

“Almost 70% of total national newspaper columnists went to feepaying schools, whereas this gilded elite, this expensively educated, comprise just 7% of the population….. In fact, anywhere there is power, or dosh, the sons and daughters of the wealthy predominate.” Page 118.

“Some 58% of those working in the law – rising to 80% when you get to High Court judges in the very top barristers – and 55% of senior civil servants. They also make up more than 60% of the top echelon of those in the City of London, some 70% of surgeons and consultants, and 55% of journalists,…… 80% of the very top jobs in society are held by people who went to private school.”Page 121.

“when I joined the BBC today programme at the end of the 1980s, I noticed very quickly that almost everyone else to work on it had been privately educated.” Page 125.

In a fascinating chapter (chapter 11) Leo identifies in great detail the way that our quangos and political bodies are dominated by a liberal political elite. This was an absolutely brilliant chapter that I would love to quote in full. The main thesis is that rather than having a revolution by shooting people and waving red flags from the top of burning barricades Liddell describes a more amenable process “of like-minded liberal intellectuals appointing one another to positions of power and authority, perhaps over a cup of coffee and some nice organic biscuits, those ones that have bits of oats in them. How to play the game? Think of a quango, or a public body, or a charity, or something even bigger, like the BBC, or some enquiry that the government has going at the moment. Google the name you have chosen, and then find out who runs it or advises it. That’s easy to do – they are all meant to be transparent now, so the advisory board or the trust will all be listed somewhere. Then click on one of the names and look at the biography of that person. You will find, without fail, they are also on the boards at least five or six other things. At this point you might be surprised, because there will not seem to be a connection at all between the various institutions listed – except that, most likely, they depend upon your wallet for their existence. “page 144.

“They are all secular, middle-class, bien-peasant liberals.”

“So what do I mean by faux left, then? These are people who consider themselves of the left, or leftish, but whose views are either wholly irrelevant to the poorest indigenous sections of our society, or actively hostile towards them. Their leftism will certainly include a warm embrace for the notion of ‘diversity ‘, when this term is examined in detail it will be seen to explicitly exclude the white working class.” Page 149.

18) A Generation of Lawyers

“The compensation thing is typical of our age; a grasping and individualistic approach which would, in the days of our parents, have seemed obscene or simply ludicrous.” Page 158.

“Of the very top judges, 90% were educated at private schools, and 90% are white middle-aged or rather older men. They urge progressive change on the rest of us, they demand it of us, and given the opportunity they will persecute us for not being sufficiently inclusive and diverse. They will rail against racism or sexism from their benches – their perniciousness, their wrongness. But it is a case of do as I say, not do as I do. There is not a less inclusive, less diverse, set of people in the country. And they know this. They are not noticeably unhappy with the situation as regards and sales.” Page 162.

“under the last Labour government we had 13.8 new laws every working day.”page 163.

“Londonitis. Politicians, civil servants and journalists who make up Britain’s governing class have had their worldview shape by living in the capital and its wealthy satellites. They run one country, but effectively live in another.” Page 172. (Neil O’Brien).

“What neither left nor the right seem to get is that the liberal social agenda is a direct consequence of London’s privilege and affluence. Marx was right in this, if nothing else – the base determines the superstructure. What the London liberal elite dresses up as social concern and progressivism is actually partially – clothed economic self-interest. It likes immigration because it means employees are cheaper, and so are the staples of the Metro middle-class elite: nannies, foreign restaurants, electricians, decorators, plumbers and taxi cabs.” Page 173.

As I said this is a provocative book with lots of superb analysis, some things I don’t think he has quite got….and ultimately although expressing the frustration and the despair, he doesn’t see the answer!

Speaking of the lack of working class politicians

“By and large, political heads do not these days, poke above the parapet, and if they do they are soon picked off. Our sensibilities are so tender almost anything stated in plain and unequivocal English is liable to grotesquely offend someone, somewhere – and they will surely have their revenge.” Page 137.
21) A Wired Generation

“There is a truth in Slavoj Zizek’s observation that the Internet ‘provides reality deprived of substance ‘. The substance is there, of course, being the creatures we are, we are not terribly interested. Obviously this is not something for which we should blame Tim Berners-Lee: the fault is not the technology but our use of it. We are much the same with television; an astonishing medium, unlimited potential, etc, etc, and you will find, tucked away within 550 channels, rarely, something genuinely illuminating and arresting. But the vast majority of it is some airheaded tart with enormous baps being forced to eat beatles by two gurning Geordie munchkins in a mockup jungle.” Page 214.

“I suppose I should concur that we are now more widely informed and more readily informed than was ever the case in the past. But it is hard to argue that we are better informed or more deeply informed.” Page 215.

“The irony being that the medium designed to enhance and expand freedom of speech has actually had the effect of curtailing it” Page 219.

“suddenly the liberal left can hear what the majority are thinking, they don’t like it one bit.” Page 222.

“We have now, instead, is a chaos of change, transience and impermanence, in the country which has been denuded of those things which bind together as a whole. We have competing groups, each was separately proclaiming their sense of victimhood their grievances. And doing so with such rapidity!” Page 236.

23) A Deluded Generation Enslaved by its own Freedom

“We have been led, since the middle of the 1980s, by an elite which increasingly bought into the secular social liberalism and moral relativism of the 1960s and the laissez-faire economics of the Chicago school. And while the rest of us followed along more or less willingly, it was the Metropolitan bourgeoisie that gained the most.” Page 230.

At the beginning of chapter six on marriage with kids he cites Matthew Arnolds poem.

“Ah Love, let us be true

To one another! For the world, which seems

To lie before us like a land of dreams,

So various, so beautiful, so new,

Hath really neither joy, nor love, nor life,

Nor certitude, nor peace, nor help for pain”

“We know, for a start, from numerous opinion polls (usually carried out in the US), that people are happier if they have a religious faith, for example.” Page 188.