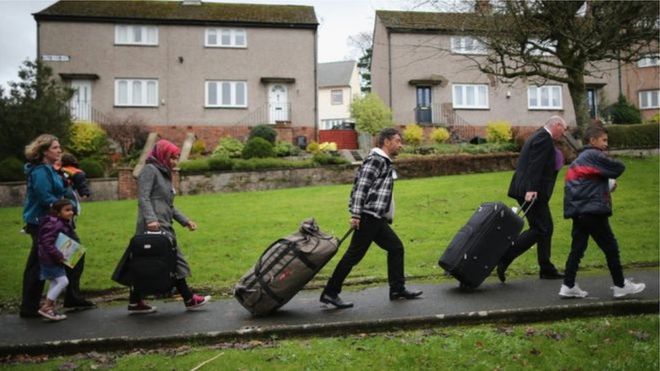 Welcome to the final Light Engaging Darkness for this year…

Amidst all the bad news stories I am glad to see this one – it makes me proud of my country. Scotland agreed to take 2,000 of the 20,000 Syrian refugees coming to the UK within five years. Todays came news that we did it in two and are preparing to take more. Hats off to the Scottish government and Scotland’s local councils for this achievement. For me it is a mark of a civilised society that genuine refugees are welcomed and taken care of.

“The Jews were persecuted. I’m a Christian and God created man for freedom. Everything that is against freedom is devilish”

But another thing that struck me about this were the following quotes that are also very revealing.

“In Dundee anyone can be who they want to be”.

I very much doubt that. It’s both illogical and untrue. Its obvious that whoever said this did not mean that people could be Nazis if they wanted to be. I can’t be rich if I want to be. And I can’t be a millionaire football player. Its just one of those meaningless statements which people think has meaning.

“There is nothing to stop Dundee being an inclusive, loving and open city”

Pink News reports that Franklin Graham is due to speak at a mission in Blackpool. So

what? Why is this news? Because a number of MPs, including a government minister have called upon him to be banned from coming to the UK.   It is one thing to object to things that he says, and to disagree, but quite another to say that those whose views we do not like should be banned. I loved what one of the MPs, Gordon Marsden, Labour MP for Blackpool South said – Graham’s views are “incompatible with what Jesus said in the Bible.” Brilliant so now we can ban people from the UK because they go against what Jesus says in the Bible…can I suggest that is going to severely limit the number of visitors – especially politicians and media celebrities, who are not noted for their compatibility with what Jesus says in the Bible!

The government lost a vote on Brexit that seemed fairly innocuous. Basically it was about allowing parliament to have a final vote on any deal between the UK and the EU. For those who believe in the sovereignty of parliament this was surely a no-brainer. But things are not that simple.

We were told that this was not about defeating Brexit. I listened to numerous MPs saying that this was not the case. And then after the government was defeated anti-Brexit MPs tweeted that it was…. no wonder that the public have so little trust in politicians. Lying seems a necessary qualification!

Meanwhile the old boys of New Labour are trying to make a comeback. Tony Blair now

tells us that his mission is to stop Brexit. His old side kick Alaister Campbell also tweeted in support of a group who are proposing to put up a bus with ‘Brexit Bill £50 billion and counting – stop Brexit and spend it on the NHS” (this group is affiliated with the European Movement).  Campbell is not stupid and he knows that this is a lie – a whopping lie that makes the £350 million (£100 million out) seem miniscule in comparison. Why? Because if we stay in the EU – paying £18 billion per year (£10 billion net) it will cost us far more than £50 billion. In other words that £50 billion won’t be spent on the NHS because it (and a whole lot more) will have to be sent to the EU.   It’s little wonder that this man speaking on BBC Question time summed up the feelings of a lot of ordinary working people who are fed up of the politics and games and just want out.

In some sense every Christian should be a feminist. Equal pay and equal in the eyes of the law should automatically follow from male and female both being equally made in the image of God. But there are different kinds of feminism. These rules on dating for an ‘intersectional feminist’ are just bizarre – Ten things every intersectional feminist should ask on a first date –

“You may scratch your head at this one, but much like racism and misogynous, being pro-sex worker is a necessary pillar of dismantling the patriarchy. I don’t mean pro-sex worker in the sense where non-sex workers write op-eds and think pieces about how sex work is amazing and feminist.

I mean the kind where we pass the mic to sex workers because they know their experiences better than anyone who hasn’t ever engaged in sex work. I mean the kind of pro-heauxism where you understand the labor of sex workers of color, especially trans women of color who engage in sex work, because their experience and knowledge is crucial to understanding the oppressive structures of our world.”

This article on the other hand shows the best of feminism. A thoughtful and disturbing article on a problem that the left don’t want to admit because it could be used to be anti-immigrant but most of all because they are scared of being accused of Islamaphobia which in the eyes of some has become second only to transphobia as the greatest social sin.

“But open discussion of this subject is thwarted by taboos. Xenophobic movements in and outside Sweden use immigrant rapes as a political weapon to generalize about immigrants, which has made it an understandably sensitive topic. This has added to concerns that multiculturalism is tarnished and created a dilemma for Swedish politicians confronted with a choice between progressive orthodoxies about the benefits of multicultural diversity and the feminist duty to ensure female welfare and safety.”

Bermuda has become the first territory in the world to restore the traditional definition of marriage by legislating to ban same-sex weddings only six months after they were introduced.

this will be my last LED until the New Year…I am taking a break from monitoring and commenting on all this material. I hope and pray that you have a great Christmas and New Year. I leave you with a video of a wonderful group of young people in my own church singing a beautiful rendition of Silent Night…enjoy….