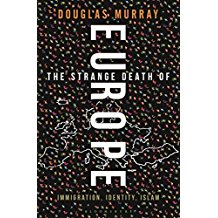 I read a lot of books. Some are all time classics (Lord of the Rings, the Brothers Karamazov, Confessions of St Augustine), others are unknown but really helpful. I try to read books from a wide variety of authors, including those I know who will challenge my preconceptions and prejudices.   Some books confirm you in your views, others

challenge them and occasionally there comes along one that causes you to change them. I have just finished one such book – Douglas Murray’s surprising bestseller The Strange Death of Europe – Immigration, Identity and Islam.  It is such an important book that I want to spend some time reflecting on it and the implications for us. (I began writing this and realised that it would go way beyond what any sane person would have the time to read – so I am going to turn this into a mini-series – looking at the main themes of the book).

The Strange Death of Europe seriously is a book that is a game changer – beautifully written, clearly argued and well-evidenced.  It is not a book that I could agree with on everything but even though I pushed back against some of the things I read in it, I have to say that it is a book that has changed my mind on a number of key issues. I wish that as many people as possible could read it – and, if there are any thinking and principled politicians left, I hope that they will read it with an open mind and not just buy into the knee jerk reaction of Murray is a right-wing, Islamaphobic, xenophobic.

Murray himself is a fascinating person. As readers of this blog know I love reading The Spectator, not so much because of its views but because of the quality of its informative writing and the fact that it is one of the few media outlets left where a genuine variety of views are presented.   I first came across Murray as an associate editor of The Spectator. Apparently he was raised in London by a Gaelic speaking father from the island of Lewis

and an English mother.   He was educated at Oxford and is a brilliant and provocative writer and speaker. He wrote an excellent biography of Lord Alfred Douglas, when he was only 19 years old. His views on Islam are strong – so much so that having criticized Islam in the Netherlands he cannot travel there without a police security guard.   Murray is openly gay and atheist and yet he describes himself as a Christian atheist. I think this is part of the problem with the book – he analyses the situation in Europe brilliantly, but struggles with the solution. Indeed – in an honest admission – he doesn’t have one.  I love the book though and would love to meet Murray and interview him about it.   It is quite brilliant.

The basic theme of The Strange Death of Europe is that the continent having forgotten its Christian roots and replaced it with a mishmash of secular humanism, materialism and the religion of human rights, has found itself unable to cope with the mass immigration of Muslims who do not share the liberal (Christian) values of Western European democracies and who will end up causing the death of Europe. In effect he argues that Europe – or at least its political classes – are inadvertently committing political suicide.   I find his case overall pretty convincing and depressing.   I would like to read a serious challenge to it (not just name calling – ‘right wing’ ‘Islamaphobic’ ‘xenophobe’!).   But meanwhile let me reflect on it as I go through it. I highlighted so many passages and in the rest of this article and series I intend to let Murray speak in his own words and then comment on them .

“For religion had not only retreated in Western Europe. In its wake there arose a desire to demonstrate that in the 21st-century Europe had a self-supporting structure of rights, laws and institutions which could exist even without the source that had arguably given then life…… In the place of religion came the ever-inflating language of “human rights” (itself a concept of Christian origin). We left unresolved the question of whether or not our required rights were reliant on beliefs that the continent had ceased to hold or whether they existed of their own accord. This was, at the very least, an extremely big question to have left unresolved while vast new populations were being expected to “integrate”. P.6

What if the foundation of modern human rights is not something that is universal in human character, but rather has come from a system of beliefs (Christianity) which has now largely been rejected – at least by those who govern us?

Here Murray recognizes something that is absolutely crucial. Something that Larry Siedentop in his great work Inventing the Individual: The Origins Of Western Liberalism, 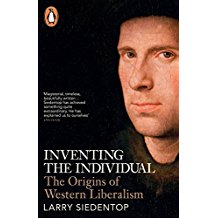 demonstrates and that Nick Spencer in his The Evolution 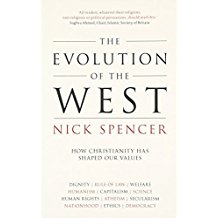 of the West does likewise: That modern values which are often assumed to be liberal, humanistic and secular are in factnothing of the sort – at least in their origin. Freedom, equality, diversity and others are in actual fact the fruits of Christian roots. The question raised by Murray is whether the fruits can survive without the roots.

In the quote above he raises the important idea that ‘human rights’ has replaced religion and he argues that rather than being self-evident to all decent thinking human beings, there are different versions of human rights. Something I have written about before.  The Religion of Human Rights is Anti- Democratic – Article in Scotsman

What if the foundation of modern human rights is not something that is universal in human character, but rather has come from a system of beliefs (Christianity) which has now largely been rejected – at least by those who govern us?   Those who talk glibly of open borders (often vague unthinking idealists or the wealthy who don’t have to face the consequences) seem to have worked on the premise that the millions who have come to Europe from non-European cultures would of course want to integrate and accept ‘our’ values. That is why in the UK we get so much talk from the government of ‘British’ values without anyone seeming to be able to either define what they are or what is their basis.   Ironically for people who lay such great store on being anti-racist, their view in practice turns out to be a profoundly racist one.   The default assumption is that our values are de facto human values and that people coming from other backgrounds (by implication, inferior) will automatically want to have and share our values.

This is the same kind of unthinking arrogance that led Tony Blair, George Bush, David Cameron and other Western leaders to think that if only we got rid of dictators in the Middle East and established democracy, then Middle Eastern countries would end up like Western liberal democracies – because that is after all what people want. No consideration was given to the fact either that people might not want it, or that they might not be ready for it. No consideration was given at all to human sinfulness, stupidity and evil (including our own) and so in our blind faith in the obvious value of our own values, we bombed dictatorships and created ISIS.

Today Western governments (at least in public) and most of the media and academic elites feel that they can lecture us in what real Islam is, and what everyone wants. They assure us that millions of Muslims coming to the West will just integrate and that their values are basically the same as ours. But what if they are wrong? Or is it ‘racist’ or ‘Islamaphobic’ to even ask the question?

And then Murray comes up with this brilliant insight:

“in order to incorporate as large and wide number of people as possible it is necessary to come up with a definition of inclusion that is as wide and unobjectionable as possible. If Europe is going to become a home for the world it must search for a definition of itself that is wide enough to encompass the world. This means that in the period before this aspiration collapses our values become so wide as to become meaninglessly shallow. So whereas European identity in the past could be attributed to highly specific, not to mention philosophically and historically deep foundations (the rule of law, the ethics derived from the continent’s history and philosophy), today the ethics and belief of Europe – indeed the identity and ideology of Europe – have become about ‘respect’, ‘tolerance’ and (most self abrogating of all) ‘diversity’. Such shallow self definitions may get us through a few more years, they have no chance at all being able to call on the deeper loyalties that societies must be able to reach if they are going to survive for long.” P.7

Is it true that we have become so ‘meaninglessly shallow’ that we have no ideological basis for our society? Is it the case that whilst our politicians use buzz words like ‘respect’, ‘tolerance’ and ‘diversity’; these words are used in an Alice-In-Wonderland fashion – where they can mean whatever anyone wants them to mean? I think this hits the nail on the head.   I am fed up hearing political soundbites – whether repeated ad nauseam on Twitter, or used at party rallies (what we used to call party conferences) where they make a pretty sound, get the faithful cheering and fit in to the news headlines, but lack any real substance or meaning.

Thus Murray has set the stage – and we are only at page 7! Next week we will move on to what he says about the question of immigration and how we got here.

Meanwhile let me say that this is a brilliant book that is worth any serious thinker buying and reading.  I would make it complusory reading for academics, journalists, clergy and politicians!  And anyone else who cares about what is happening in society.