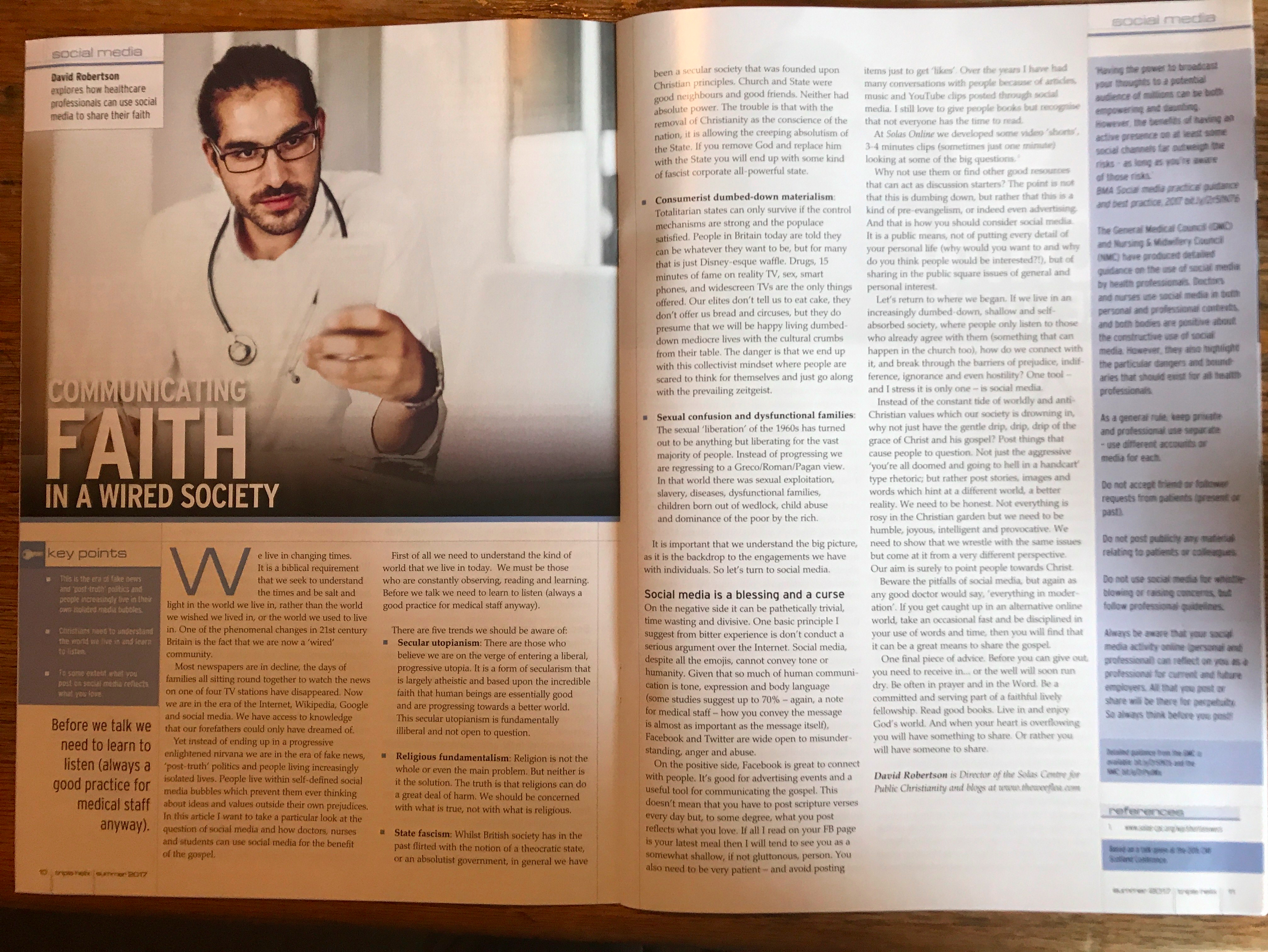 This article was published in the CMF Magazine Triple Helix

Communicating Faith in a Wired Society

We live in changing times. It is also a biblical requirement that we seek to understand the times and be salt and light in the world we live in, rather than the world we wished we lived in, or the world we used to live in. One of the phenomenal changes in twenty-first century Britain is the fact that we are now a ‘wired’ community.

Most newspapers are in decline, the days of families all sitting round together to watch the news on one of four TV stations have disappeared. Now we are in the era of the Internet, Wikipedia, Google and social media. We have access to knowledge that our forefathers could only have dreamed of.

Yet instead of ending up in a progressive enlightened nirvana we are in the era of fake news, ‘post-truth’ politics and people living increasingly isolated lives. People live within self-defined social media bubbles which prevent them ever thinking about ideas and values outside their own prejudices. In this article I want to take a particular look at the question of social media and how doctors, nurses and students can use social media for the benefit of the gospel.

First of all we need to understand the kind of world that we live in today. We must be those who are constantly observing, reading and learning. Before we talk we need to learn to listen (always a good practice for medical staff anyway).

There are five trends we should be aware of:

Secular Utopianism: There are those who believe we are on the verge of entering a liberal, progressive utopia. It is a form of secularism that is largely atheistic and based upon the incredible faith that human beings are essentially good and are progressing towards a better world. This secular utopianism is fundamentally illiberal and not open to question.

Religious fundamentalism: Religion is not the whole or even the main problem. But neither is it the solution. The truth is that religions can do a great deal of harm. We should be concerned with what is true, not with what is religious.

State Fascism: Whilst British society has in the past flirted with the notion of a theocratic state, or an absolutist government, in general we have been a secular society that was founded upon Christian principles. Church and State were good neighbours and good friends. Neither had absolute power. The trouble is that with the removal of Christianity as the conscience of the nation, it is allowing the creeping absolutism of the State. If you remove God and replace him with the State you will end up with some kind of fascist corporate all-powerful state.

Consumerist dumbed-down materialism: Totalitarian states can only survive if the control mechanisms are strong and the populace satisfied. People in Britain today are told they can be whatever they want to be, but for many that is just Disney-esque waffle. Drugs, 15 minutes of fame on reality TV, sex, smart phones, and widescreen TVs are the only things offered. Our elites don’t tell us to eat cake, they don’t offer us bread and circuses, but they do presume that we will be happy living dumbed-down mediocre lives with the cultural crumbs from their table. The danger is that we end up with this collectivist mindset where people are scared to think for themselves and just go along with the prevailing zeitgeist.

Sexual Confusion and Dysfunctional Families: The sexual ‘liberation’ of the 1960s has turned out to be anything but liberating for the vast majority of people. Instead of progressing we are regressing to a Greco/Roman/Pagan view. In that world there was sexual exploitation, slavery, diseases, dysfunctional families, children born out of wedlock, child abuse and dominance of the poor by the rich.

It is important that we understand the big picture, as it is the backdrop to the engagements we have with individuals. So let’s turn to social media.

Social media is a blessing and a curse

On the negative side it can be pathetically trivial, time wasting and divisive. One basic principle I suggest from bitter experience is don’t conduct a serious argument over the Internet. Social media, despite all the emojis, cannot convey tone or humanity. Given that so much of human communication is tone, expression and body language (some studies suggest up to 70% – again, a note for medical staff – how you convey the message is almost as important as the message itself), Facebook and Twitter are wide open to misunderstanding, anger and abuse.

On the positive side, Facebook is great to connect with people. It’s good for advertising events and a useful tool for communicating the gospel. This doesn’t mean that you have to post scripture verses every day but, to some degree, what you post reflects what you love. If all I read on your FB page is your latest meal then I will tend to see you as a somewhat shallow, if not gluttonous, person. You also need to be very patient – and avoid posting items just to get ‘likes’. Over the years I have had many conversations with people because of articles, music and YouTube clips posted through social media. I still love to give people books but I recognise that not everyone has the time to read.

At Solas Online we developed some video ‘shorts’, 3-4 minutes clips (sometimes just one minute) looking at some of the big questions.  Solas Short Answers

Why not use them or find other good resources that can act as discussion starters? The point is not that this is dumbing down, but rather that this is a kind of pre-evangelism, or indeed even advertising. And that is how you should consider social media. It is a public means, not of putting every detail of your personal life (why would you want to and why do you think people would be interested?!), but of sharing in the public square issues of general and personal interest.

Let’s return to where we began. If we live in an increasingly dumbed-down, shallow and self-absorbed society, where people only listen to those who already agree with them (something that can happen in the church too), how do we connect with it, and break through the barriers of prejudice, indifference, ignorance and even hostility? One tool – and I stress it is only one – is social media.

Instead of the constant tide of worldly and anti-Christian values which our society is drowning in, why not just have the gentle drip, drip, drip of the grace of Christ and his gospel? Post things that cause people to question. Not just the aggressive ‘you’re all doomed and going to hell in a handcart’ type rhetoric; but rather post stories, images and words which hint at a different world, a better reality. We need to be honest. Not everything is rosy in the Christian garden but we need to be humble, joyous, intelligent and provocative. We need to show that we wrestle with the same issues but come at it from a very different perspective. Our aim is surely to point people towards Christ.

Beware the pitfalls of social media, but again as any good doctor would say, ‘everything in moderation’. If you don’t get caught up in an alternative online world, take an occasional fast and be disciplined in your use of words and time, then you will find that it can be a great means to share the gospel.

One final piece of advice.

Before you can give out, you need to receive in… or the well will soon run dry. Be often in prayer and in the word. Be a committed and serving part of a faithful lively fellowship. Read good books. Live in and enjoy God’s world. And when your heart is overflowing-broken you will have something to share. Or rather you will have someone to share.
David Robertson is Director of the Solas Centre for Public Christianity and blogs at www.theweeflea.com

Based on a talk given at the 2016 CMF Scotland Conference.

‘Having the power to broadcast your thoughts to a potential audience of millions can be both empowering and daunting. However, the benefits of having an active presence on at least some social channels far outweigh the risks – as long as you’re aware of those risks.’

As a general rule, keep private and professional use separate – use different accounts or media for each.

Do not accept friend or follower requests from patients (present or past).

Do not post publicly any material relating to patients or colleagues.

Do not use social media for whistle-blowing or raising concerns, but follow professional guidelines.

Always be aware that your social media activity online (personal and professional) can reflect on you as a professional for current and future employers. All that you post or share will be there for perpetuity. So always think before you post!

Detailed guidance from the GMC is available: bit.ly/2r5fN76 and the NMC: bit.ly/2rPydWx