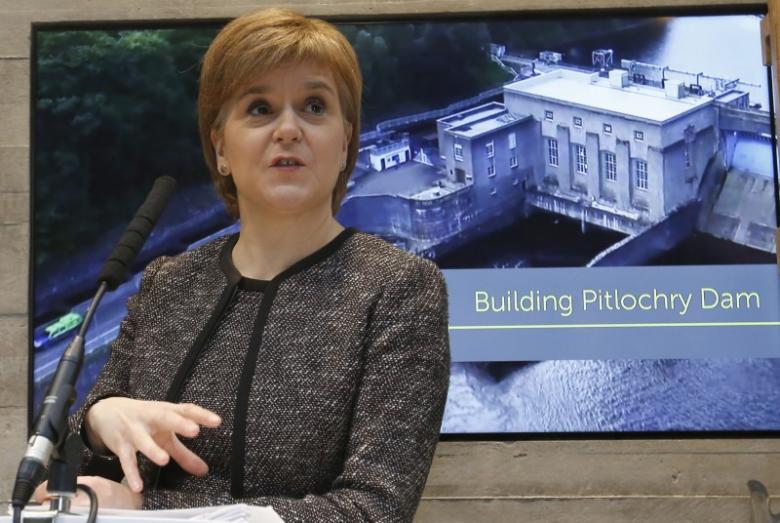 This article appeared in  Christian Today  – I was asked to offer a Christian perspective on IndyRef2.
Apparently the grand old duchess of Scotland has decided not to march her troops back down the hill. Nicola Sturgeon, the First Minister of Scotland, having threatened to call a second Scottish Independence Referendum unless the UK government remained within the EU Single Market, or made special provisions for Scotland to do so, has now called for such a referendum. Many commentators up here in Scotland did not expect this to happen so soon and there is even speculation that Sturgeon did not want to call a referendum but was pushed into it by the raised expectations of her supporters and her predecessor Alex Salmond.

What was perceived as a bargaining chip in an attempt to get a better deal for Scotland on Brexit, now looks as though it may become reality. Although it should be noted that the Scottish Parliament cannot hold an independence referendum without the permission of Westminster and it is by no means guaranteed that Prime Minister May would grant that permission. It would be a gamble for the Prime Minister not to do so, in that it may fuel a stronger demand for separation, but there are many people in Scotland who do not want another referendum (49 per cent to 39 per cent according to the latest polls) and who would be thankful if we did not have to go through it just now. The smart money is on the Prime Minister refusing to grant such a poll until after Brexit is completed on the not unreasonable grounds that there is enough political uncertainty at the moment. It may even be that this is what the First Minister is hoping for. She would not have to fight a referendum that at the moment she looks likely to lose, and she could blame Westminster for not having the referendum.

Of course we all approach this with different biases. So cards on the table. I am a long time supporter of Scottish Independence and I voted Yes in the 2014 referendum. I have many friends within the SNP who are Christians and I know a number of Christian MPs and MSPs. But despite that I will personally not support another referendum for both political and what I would regard as Christian reasons. (I have even petitioned the Scottish Parliament asking them not to go ahead.)

The political is that it does not make sense to me to leave one democratic union of countries for another larger and less democratic. But it is the moral and social reasons that concern me more. Allow me to explain.

The Scottish People took part in a long and valuable, passionate and at times divisive referendum in 2014 in order to determine whether Scotland should become independent of the United Kingdom. My side lost. By a clear majority we voted to remain – 2,001,926 (55.3 per cent) to 1,617,989 (44.7 per cent) on a turnout of 85 per cent. Since then we have had another referendum on whether the UK should remain within the EU and which the UK electorate (including Scotland) voted to leave. This referendum was also divisive within Scotland, with 1,661,191 of the electorate in Scotland (62 per cent) voting for the UK to remain and 1,018,332 (38 per cent) voting to leave on a turnout of 67.2 per cent. Incidentally from this it should be clear that when the SNP say they are speaking on behalf of all the people of Scotland who clearly voted for Scotland to remain in the EU, which is demonstrably false. Only 1.6 million out of an electorate of 4 million voted for the UK to remain in the EU (we didn’t actually have a vote about Scotland and the EU).

We were promised at the time of the first Independence referendum that this would be a ‘once in a generation/lifetime’ referendum and yet we are now faced with the real prospect of a repeat within four years. Whatever our views on Scottish Independence I believe that a referendum within the next four years would be harmful to the people of Scotland and indeed the whole United Kingdom for the following reasons:

From a personal political point of view I think this is a fundamental mistake for the Scottish National Party. One third of SNP voters voted for Brexit and many of us are unlikely to vote for an Independence which we regard as worse than belonging to the UK. In addition to this it is highly unlikely that the SNP can win this referendum – whilst the latest opinion polls have the Yes vote on 48 per cent and the No vote on 52 per cent, surely we have learned by now to be cautious with opinion polls. These figures do not include the ‘don’t knows’ many of whom are likely to stay with the status quo. Furthermore whilst the SNP can parade a few celebrities who say they have changed their mind from No to Yes, my observation of Facebook and social media is that there are many more ordinary Yes voters who are going the other way.

I’m not a prophet (so please don’t stone me) but let me begin and end my short career as a political pundit with these predictions. If Prime Minister May grants another referendum, it will not be until after the UK leaves the EU. And if that referendum is held, then excepting a total economic collapse, the SNP will lose that referendum by a considerable margin and the opportunity/threat for Scottish Independence will have gone for decades. You heard it here first!

There are of course Christians who will disagree with this analysis. There are those who think that the UK is finished anyway and that the EU will be our saviour (at least in a political sense). I don’t agree. But one thing surely we can agree on? That we pray for the peace and prosperity of not only Scotland, but also the other kingdoms of this United Kingdom, and the nations of the EU and indeed the nations of this world. As Christians we know they are all temporary and that we do not serve them. We serve the King of Kings and Lord of Lords and as such we are prevented from having an all-consuming nationalism (whether of the Scottish, UK or European variety). Even in politics we are just ‘travelling through’. Yes we should be involved in this debate, but only as those who know that ‘here we have no continuing city’.

Petition to the Scottish Parliament re a Second Independence Referendum